The recent sell-off in global markets is contributing to a sharp contraction in financial conditions, possibly slowing inflation 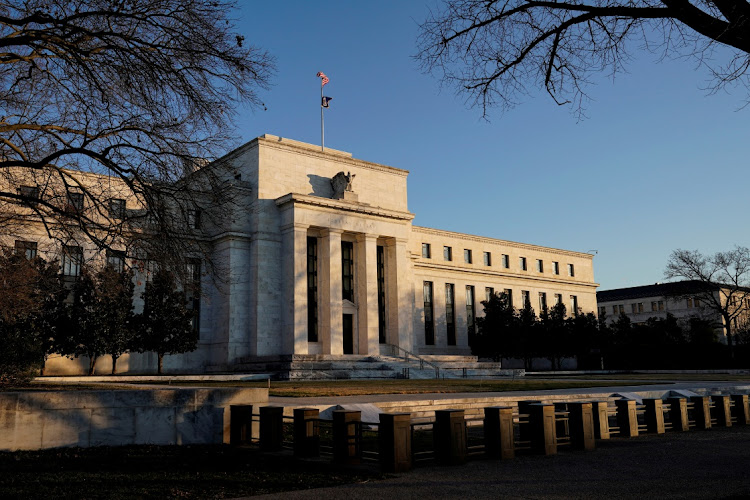 The Federal Reserve building in Washington, the US. Picture: REUTERS/JOSHUA ROBERTS

London — Slumping stocks and surging bond yields are rapidly crimping global financial conditions, yet given their effect on dampening economic growth and eventually inflation, the moves might be welcomed by the US Federal Reserve and other central banks.

“Financial conditions” is the umbrella phrase for how metrics such as exchange rates, equity swings and borrowing costs affect the availability of funding for households and businesses. Tighter conditions are widely seen as heralding a growth slowdown and vice versa.

[A] global recession is coming.

Robin Brooks, chief economist at the Institute of International Finance

So the recent sell-off in global markets — driven by signs of faster-than-anticipated interest-rate rises in the US and Europe — is contributing to a sharp contraction in financial conditions.

The widely used Goldman Sachs US financial conditions index (FCI) shows a 100-basis-points (bps) tightening this month alone. The last time the US FCI contracted as sharply was during the February-March 2020 Covid-19-linked sell-off, Goldman data shows.

Goldman’s rule of thumb is that a persistent 100 bps FCI tightening slows GDP by about one percentage point after a year, in turn slowing inflation by roughly 0.1 percentage point.

The contraction picked up speed amid a markets sell-off that took US treasury yields to the highest in over a decade, confirmed a bear market in US shares and sent yield premia on top-grade US corporate debt to the highest in years.

Yields have soared, too, in Europe, where rate expectations have repriced higher and interbank lending rates saw their biggest daily rise in over 10 years on Tuesday.

But while the FCI tightening appears alarming, it may not be for central banks, which face inflation at multi-decade highs; in fact, the latest sell-off was sparked by above-forecast US inflation for May of 8.1%.

All the more so because, as BlueBay Asset Management CIO Mark Dowding points out, Goldman’s FCI remains in line with its 30-year average of about 99.8. Another FCI compiled by the Chicago Fed shows US conditions well below their 50-year average.

“Central banks are clearly managing their messaging with one eye on financial conditions and at this point in time they wouldn’t want them to be much easier, that would more likely make them become more hawkish,” Dowding said.

An inversion in the US treasury yield curve this week shows fears are growing of a recession triggered by aggressive rate hikes.

So if tighter conditions force growth to slow, bring down inflation expectations and thus enable fewer rate hikes down the line, markets may be doing central bankers’ job for them.

“The looser conditions are today, the greater the risk of higher inflation tomorrow,” said Fahad Kamal, CIO at Kleinwort Hambros.

“The fact they are tightening is a good thing. Conditions are still a long ways off being tight; they have gone from being crazy loose to just loose.”

What is alarming some observers is the rapid cooling of economies outside the US.

Data compiled by Robin Brooks, chief economist at the Institute of International Finance (IIF), shows government borrowing costs, especially for long 30-year maturities, are rising faster than in the US.

That signals a “global recession is coming”, Brooks said.

The differential between US and foreign bond yields has shrunk to an average 1.09% this month from 1.6% in January, his data shows. The gap was at 0.67% in July 2020 when central banks were forced to slash rates as the Covid-19 pandemic hit.

The jump in German yields is particularly notable as the European Central Bank (ECB) prepares to raise rates for the first time in 11 years.

Rate-sensitive two-year German yields are up 67 bps in June, the biggest monthly jump since 1989, while since the start of April, they have soared 124 bps, outpacing a 104 bps rise in US two-year yields.

Equivalent yields in Australia are 150 bps higher and in Britain they are up about 75 bps since April.

Goldman’s global FCI is at the highest since 2009, indicating financial conditions have tightened by about 335 bps since the start of the year.