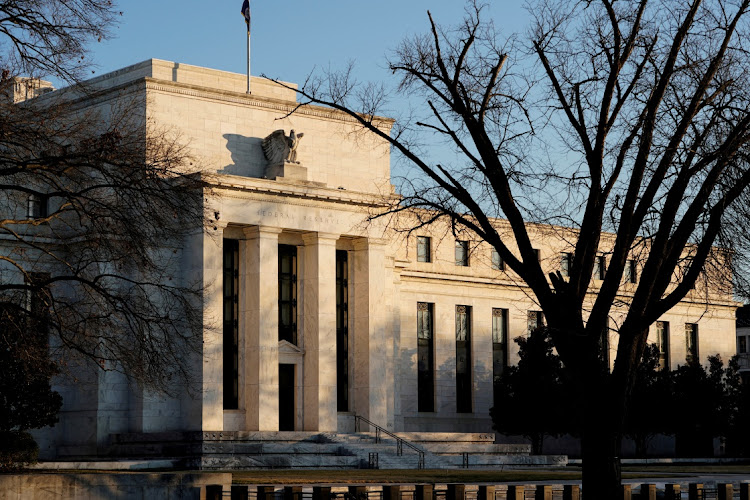 The Federal Reserve building in Washington, the US, January 26 2022. Picture: JOSHUA ROBERTS/REUTERS

The US Federal Reserve and its major counterparts in Europe, Japan, the UK and elsewhere pumped about $12-trillion into the financial system to fight the economic fallout of coronavirus, buying an array of assets and in some cases offering long-term loans to banks in a huge bout of quantitative easing (QE).

With breakout inflation now the common fear, they are reversing course. Morgan Stanley analysts recently estimated that the Fed, Bank of England (BoE), European Central Bank (ECB) and Bank of Japan (BoJ) could see their portfolios shrink by $2.2-trillion over the 12 months starting in May, the expected peak of QE.

The estimates are preliminary, and the Fed in particular may prove more aggressive if, as many analysts expect, it shifts later this year from letting maturing securities simply expire to outright sales of some assets to speed the process.

It is a unique moment. The 2007/2009 global financial crisis also unleashed a wave of QE, but the recoveries were never strong enough and did not provoke enough inflation to prompt a synchronised monetary tightening.

By removing powerful central bank buyers from markets important to setting global interest rates, such as US Treasuries, the spillovers could matter.

“We need a tightening of financial conditions... But it is possible we will see changes in rates or changes in the balance sheet that induce more of an effect on financial conditions than we think will happen,” said Karen Dynan in a presentation at the Peterson Institute for International Economics, where she is a senior fellow.

One risk is if QT effects are felt in weaker economies with high debt and “cause a ripple of sovereign debt crises around the world that disrupts markets” and further tightens conditions in developed nations, she said.

The World Bank and International Monetary Fund meet this week in sessions dominated by an interlocking set of problems that led the IMF to say last week it would cut its global growth outlook for the second time this year.

The pandemic continues to reshape global commerce with major parts of the Chinese economy on lockdown; the Ukraine war has become a humanitarian tragedy influencing flows of fuel, food and industrial minerals worldwide; and inflation is surging to multidecade highs, prompting developed world central banks to align to quash it.

The aim of tighter monetary policy is to slow demand, particularly for credit-sensitive items such as homes and vehicles, and to ease price pressures in doing so.

“A lot of the inflation is across the globe ... certainly in key producing regions including Europe,” St Louis Fed president James Bullard said this month. “We don’t want to be feeding the inflation process... Naturally a lot of central banks are pulling back all at the same time. That is appropriate.”

Adding QT to interest rate hikes is, however, a wild card. Policymakers and economists know the general impact — interest rates will be higher than otherwise — but the exact outcome is uncertain.

“There is very little experience of QT. There is none here and not much globally,” BoE governor Andrew Bailey said in March.

The BoE is already letting its balance sheet decline through passive means: as bonds mature, instead of reinvesting the proceeds and maintaining the level of cash in the financial system, it in effect deletes the money from its account and the wider economy — reversing the initial money creation done by QE — and the central bank’s balance sheet declines.

The BoE has said it will start to consider selling assets actively once it has taken its bank rate to 1.0%. Investors expect a 25 basis-point hike to 1% on May 5.

The ECB so far has only committed to stopping net asset purchases later this year. Its balance sheet may still decrease in coming months if banks repay long-term loans, as many analysts expect. Some smaller players like the Bank of Canada have also halted reinvestment.

The BoJ is not at the point of tightening, but has been slowing asset purchases.

By far the biggest player, the Fed is expected to finalise its plans at a meeting in early May. Minutes of its March discussion said policymakers had largely agreed to cut up to $95bn monthly from their holdings, about $1.1-trillion annually.

What it adds up to depends partly on how markets react. The Fed from 2017 to 2019 trimmed its balance sheet by about $650bn, but that led to a shortage of banking system reserves, a spike in short-term interest rates, and a quick reversal to put liquidity — quickly — back into the system.

Fed policymakers view that as a lesson learnt and say they expect the process to run smoothly this time. But it did show mistakes can happen.

The aim of bond buying is to help central banks overcome the impact of low interest rates, allowing them to add stimulus even after policy rates are cut to zero. The same logic now lets them withdraw economic support faster than through raising rates alone. Oxford Economics’s Adam Slater estimates balance sheet reductions in major economies could add the equivalent of as much as 1.3 percentage points to coming rate hikes.

“The new environment of massive central bank balance sheet operations means looking at tightening cycles just in terms of policy rates yields a very incomplete picture,” Slater wrote. “In our view, the risk of a misstep over the next one to two years is perhaps higher than at any time since the 1980s.”

The outcome back then? An aggressive fight against inflation triggered a recession.

Fund sees global expansion slowing to 3.6% in 2022, down from a forecast of 4.4% in January before the war in Ukraine, while inflation is forecast at ...
News
2 months ago

Bank issuers of depositary receipts can contractually charge investors when they cancel the product, potentially translate into hundreds of millions ...
Companies
2 months ago

Tightening global financial conditions have led to an increase in the number of countries at high risk of debt distress, lender says
Economy
2 months ago