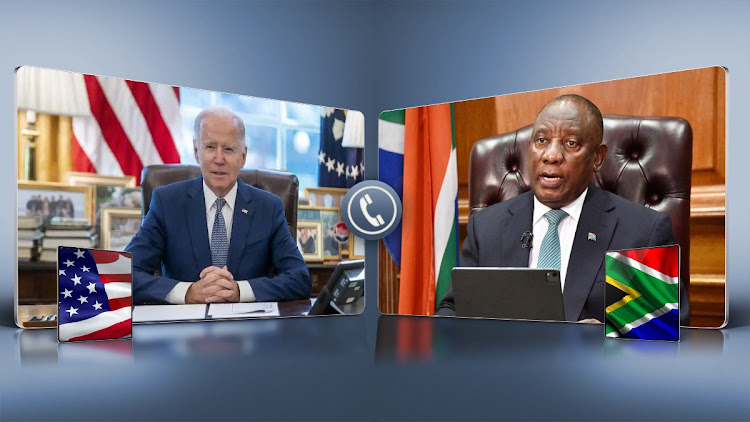 US President Joe Biden has joined a number of world leaders that President Cyril Ramaphosa has been engaging on the war between Russia and Ukraine.

On Friday evening Ramaphosa took to Twitter to confirm that he and Biden had a “productive call earlier this evening” to discuss a wide range of issues including the war.

“As part of deepening relations, we agreed to set up a team to strengthen trade, increase investment in infrastructure and work to tackle climate change.

“We discussed the need to support growth and development on the African continent. We shared views on the conflict in Ukraine and agreed on the need for a ceasefire and dialogue between Ukraine and Russia,” tweeted Ramaphosa.

Ramaphosa said he also congratulated Biden on the confirmation of Judge Ketanji Jackson Brown as the first black woman justice of the US Supreme Court.

In a statement the White House said Biden and Ramaphosa discussed the impact of the Ukraine crisis on commodity prices, supply chains and food security in Africa.

Biden is one of several world leaders that Ramaphosa has spoken with since the war broke out in Ukraine in February.

This includes conversations with Russian President Vladimir Putin and Chinese President Xi Jinping on the need for humanitarian assistance to the people of Ukraine.

Ramaphosa indicated recently he would also like to engage his Ukrainian counterpart Volodymyr Zelensky in a bid to convince both countries to rather settle their differences in a peaceful manner through negotiations.

SA was criticised for abstaining during a UN General Assembly vote to condemn Russia. One of the reasons for Ramaphosa's engagements is to explain to world leaders why SA has taken a non-aligned position on the matter.

On Thursday evening TimesLIVE reported that SA on Wednesday abstained from a UN General Assembly vote that sought to suspend Russia from the UN Human Rights Council.

In  a letter addressed to Ramaphosa, ambassador Xolisa Mabhongo said while the SA delegation remained concerned about the deadly situation still unfolding in Russia, it did not believe kicking Russia out of the council was a wise decision.

“Unfortunately, the resolution that we are considering will further divide and polarise the matter and the General Assembly, without following due process. SA maintains that in considering the suspension of a member of the Human Rights Council, we must be consistent and not selective as this would undermine the credibility  of the General Assembly and the Human Rights Council,” Mabhongo said.

This week international relations and co-operation minister Naledi Pandor defended SA’s non-aligned position on the matter saying it did not mean that the country condoned the Russian invasion.