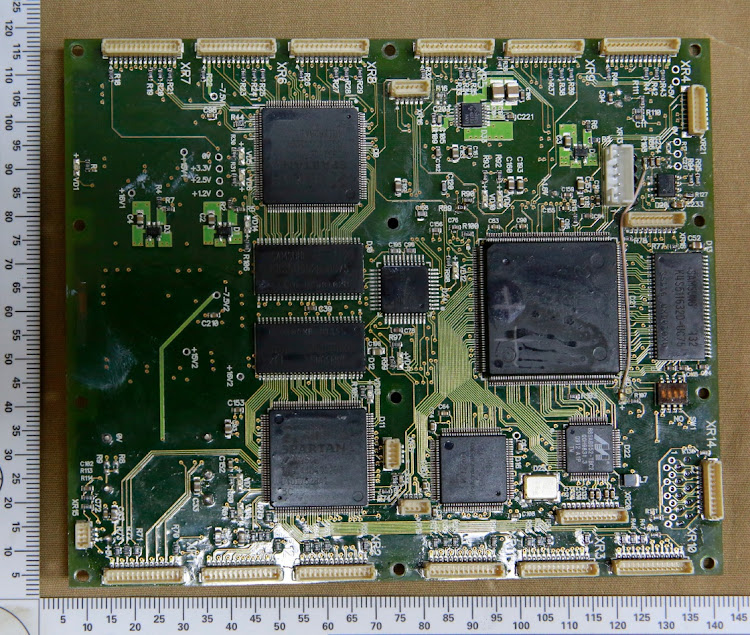 A general view of the video unit motherboard of a Russian-manufactured drone, documented by Conflict Armament Research on May 11 2019, and obtained by Reuters on March 31 2022, in Kyiv, Ukraine. Picture: CONFLICT ARMAMENT RESEARCH/HANDOUT via REUTERS

Oakland — When Silicon Valley chipmaker Marvell learnt that one of its chips was found in a Russian surveillance drone recovered in 2016, it set out to investigate how that came to be.

Years later, it reappeared in the drone recovered in Lithuania.

Marvell’s experience is one of many examples of how chipmakers lack ability to track where many of their lower-end products end up, executives and experts said. That could stymie the enforcement of new US sanctions designed to halt the export of US technology into Russia.

While higher-end sophisticated chips that can build supercomputers are sold directly to companies, lower-cost commodity ones that might just control the power often go through several resellers before they end up in a gadget.

While Russia accounted for less than 0.1% of global chip purchases before the sanctions, according to the World Semiconductor Trade Statistics (WSTS), new Western sanctions underscore the threat in human terms.

“All those drones we've seen were not armed,” said Damien Spleeters, deputy director of operations at the EU-and-Germany-funded Conflict Armament Research (CAR) group, which found the chips in the drones.

“Some of these drones that we have documented, like the Forpost, are now used in their armed version in the current conflict [in Ukraine]”, he said.

Texas Instruments and STMicroelectronics did not reply to Reuters for comment; NXP and Analog Devices said they comply with sanctions; Intel said it’s against its products being used for human rights violations; and Samsung said it does not make chips for military purposes.

Military weapons such as drones, guided missiles, helicopters, fighter jets, vehicles and electronic-warfare equipment all need chips and experts say they often use older chips that are well tested. Now, under new US sanctions, even some of the most basic chips cannot be shipped to prohibited Russian entities.

For the most sensitive chips, controlled under the International Traffic in Arms Regulations (ITAR), the US company selling them can be held responsible if the chip ends up with an entity on the US banned list, said Daniel Fisher-Owens, a specialist on chips and export control at law firm Berliner Corcoran & Rowe.

Figuring out where chips go is like tracking the flow of narcotics, experts say.

James Lewis, director of the technology policy programme at Washington-based Centre for Strategic and International Studies

The point of the Russian sanctions, Lewis said, isn’t to track every chip, but to disrupt their supply chain, which the intelligence community has been working on.

“Knowing where the chips go is probably a very good thing. You could for example, on every chip put in essentially a public/private key pair, which authenticates it,” and allows it to work, Eric Schmidt, the former Google chairman, told Reuters in a recent interview, discussing high-end processors.

Marvell says it has a growing number of products supporting fingerprinting and tracing, and is working with industry partners and customers to advance this area. The Global Semiconductor Alliance (GSA) has proposed its members work on building a “Trusted IoT Ecosystem Security” (TIES) group to tag and trace chips, said Tom Katsioulas, technology executive at the industry group.

That may be a lot harder to do for a $2 chip, without making it prohibitively expensive. The answer could be a matter of manufacturing process, regulation and, perhaps, will.

“Ironically, the technology to do this, all of the things that we've got in there, the blockchain, the IDs in the device, this has all been done before for other applications,” said Michael Ford, an executive at Aegis Software who is working with the industry standards group IPC for better supply chain security. “All that is needed is that catalyst to make it happen.”

Russia’s invasion of Ukraine could be that catalyst, he said.

Western sanctions have cut off Russia from much of world trade, but exceptions have been made for oil and gas
World
4 months ago
Next Article