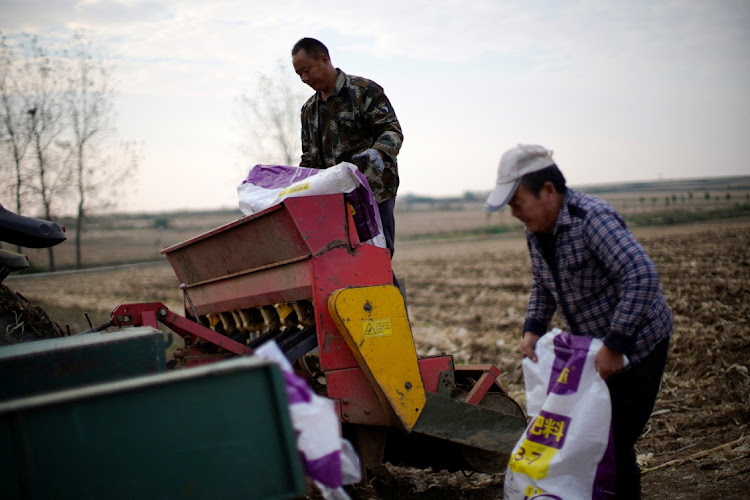 Farmers load sacks of fertiliser into a seeder on a wheat field in Nanyang, Henan province, China on October 13 2021. Picture: REUTERS/ALY SONG

Rio de Janeiro/Chennai/Durban — A wheat farmer in India, the owner of a sugar cane firm in Brazil and a grain producer in SA. Thousands of kilometres apart, the three men face the same challenge: protecting their incomes from the fertiliser shortage caused by the war in Ukraine.

As the conflict enters its second month, its effects are being felt by farmers around the globe, with the international price of key soil nutrients from Russia and Belarus soaring to record highs last month.

Russia, which invaded Ukraine on February 24, is one of the world’s largest producers and exporters of fertilisers. Russia and Belarus combined accounted for more than 40% of global exports of potash last year, for example.

Russia’s military action and sanctions imposed by Western governments in response have increased crude oil and natural gas prices, disrupted global freight and affected the supply and cost of fertilisers for farmers in developing countries.

While large agribusiness companies have stockpiles of fertiliser, small-scale farmers in India, Brazil and SA have been left high and dry in the short term, as many cannot find fertiliser to buy at all, irrespective of price.

The crisis threatens the livelihoods of those who survive from the land, but it could also be an opportunity for farmers to adopt more sustainable methods of keeping their soil fertile.

“It has been a nightmare for me, having to queue up endlessly to buy fertilisers,” said Shiv Ram Singh, a rice and wheat farmer in central India’s Madhya Pradesh state.

"[I] wake up in the middle of the night because someone has an extra sack they are selling on the black market,” he told the Thomson Reuters Foundation.

In Brazil, Fábio Castro runs a medium-sized, mechanised sugar cane farm of 1,111 acres in the southeastern state of Sao Paulo.

Despite the larger size of his operation, the impact he faces has been similar to Singh, who owns just four acres.

As in India, Brazil’s small and medium-scale farmers only buy fertiliser when they need it, rather than in bulk. Since the conflict started, Castro cannot get sellers to quote a price.

“It’s no longer a question of price — it’s logistics, delivery,” he said. “They have no idea if they’ll have the product to deliver.”

Last July, riots and looting rocked SA, catalysed by the arrest of former president Jacob Zuma for corruption. But as grandmothers and children raided grocery stores, it became apparent the chaos was also fuelled by hunger.

“The cost of fertiliser is already 60% higher than it was two months ago,” said Neo Masithela, national chair of the African Farmers’ Association of SA.

Grain farmer Victor Teboho recently visited his local co-op to buy fertiliser, but was told none was available despite bags of it visible on the shop floor.

Those supplies had long been bought by others, leaving farmers fretting about his recently planted soya beans, maize, beans and wheat.

The crisis has sent countries scrambling for solutions.

In India, the government is expected to spend a record 1.55- trillion rupees ($20.64bn) in subsidies to farmers and fertiliser firms this fiscal year to avoid shortages and keep prices affordable.

In Africa, the African Development Bank aims to raise $1bn from emergency support facilities, concessional loans and donor governments to boost wheat, maize, rice and soya yields on the continent and stave off a food crisis.

In Brazil, far-right President Jair Bolsonaro has pushed for a bill to allow mining on indigenous lands, which he argued would make Brazil self-sufficient in potash, a mineral that is an essential fertiliser ingredient.

The move was propaganda by Bolsonaro mainly to rally his voter base, as the bill is unlikely to become law, said Raul do Valle, a director at WWF Brazil, calling the bill “criminal”. The Senate will almost surely sit on it, he said.

Brazil has enough potash reserves outside indigenous lands and just needs to develop them, said André Guimarães of the Brazilian Coalition on Climate, Forests and Agriculture, a group of companies and individuals lobbying for a low-carbon economy.

“But this is not a solution for now,” he said, adding that developing potash mines would take five to 10 years.

For some, the fertiliser crisis is a chance to tackle social issues in the agricultural sector and explore greener alternatives to mineral and chemical-based fertilisers.

“Some of the crisis must be seen as an opportunity,” he said. Research trials in Eastern Cape province show farmers can yield huge tonnages from wheat fields due to good natural soil health after land has been left fallow for a while, he said.

In India, experts are calling for a fair and equitable distribution of available fertiliser supplies.

Failing to do so could worsen an already difficult situation for Indian farmers, the majority of whom have land holdings of less than five acres.

“If input costs increase, farming becomes unsustainable for small and marginalised farmers,” said Suresh Garimella, a senior research associate at the Society for Social and Economic Research, warning the crisis will only grow as farmers prepare to sow their autumn crops in June.

Singh, the wheat farmer, said he might switch to organic fertilisers as a long-term alternative.

“It will take me three or four years to go completely organic. In the meantime, I am hoping there is some regulation in the market and the [fertiliser] supply improves,” he said.

Teboho said some farmers were also thinking of using animal manure instead of chemical fertilisers.

Enriching the soil with organic nutrients could lessen dependency on foreign markets and also be good for the environment, farming experts said, as they are less energy-intensive to produce than mineral-based fertilisers from Russia.

Brazil previously had a history of using locally produced organic fertilisers, but many techniques were lost in the last 20 years as dependency on imported fertilisers grew, said Guimarães from the climate, forests and farming coalition.

“There are solutions with relatively low costs,” he said. But even if simple, they require public investment and technical assistance, which are now lacking, he said.

Like Singh, sugar cane farm owner Castro has considered alternatives but has yet to commit to anything new.

“We’ve reached a point where we can’t make a mistake,” he said. “For us, it can be fatal. It’s a heavy word, but it’s realistic: we can go broke.”

Russia signals all its main exports could soon be in roubles

Rocketing food prices are due to more than the Russian invasion of Ukraine, writes Anthony Clark
Companies
3 months ago
Next Article