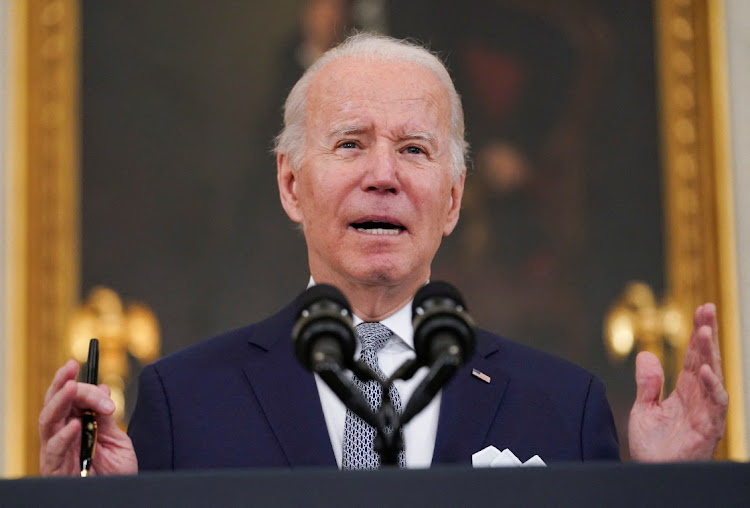 Washington/London — The US state department announced on Sunday it is ordering diplomats’ family members to leave Ukraine, as US President Joe Biden weighed options for boosting America’s military assets in Eastern Europe to counter a build-up of Russian troops.

The order, which also allows US diplomats stationed at the embassy in the Ukrainian capital Kyiv to leave voluntarily, is one of the clearest signs yet that American officials are bracing for an aggressive Russian move in the region.

“Military action by Russia could come at any time,” the US embassy said in a statement. Officials “will not be in a position to evacuate American citizens in such a contingency, so US citizens now present in Ukraine should plan accordingly”, it added.

Tensions in Ukraine have been increasing for months after the Kremlin massed about 100,000 troops near Ukraine's borders, a dramatic build-up the West says is preparation for a war to prevent Ukraine from ever joining the Nato Western security alliance.

The Kremlin has repeatedly denied planning to invade, but the Russian military already tore off a chunk of Ukrainian territory when it seized Crimea and backed separatist forces who took control of large parts of eastern Ukraine eight years ago.

The state department’s announcement comes a day after British authorities said they have information the Russian government is considering a former Ukrainian legislator as a potential candidate to head a pro-Russian leadership in Kyiv.

IISS senior fellow in urban security and hybrid warfare Samir Puri believes there is still deep uncertainty as to what Russia’s next move is and whether its military forces deployed near Ukraine will be committed to battle.

The New York Times said Biden is mulling plans to send 1,000-5,000 troops to East European countries, with the possibility of increasing the number should tensions flare further.

A senior administration official declined to confirm the numbers on Sunday but said “we are developing plans and we are consulting with allies to determine options moving forward”.

The US has sent military assistance to Ukraine but has so far held back from sending American personnel.

US secretary of state Antony Blinken has rebuffed calls to immediately impose economic sanctions on Russia, saying on Sunday that doing so would undercut the West's ability to deter potential Russian aggression against Ukraine.

Blinken was due to meet virtually with members of the EU’s foreign affairs committee on Monday.

As US troop deployments were discussed, a separate senior administration official said US economic penalties on Russia would have far-reaching consequences should it drive any further into Ukraine.

The US would use the foreign direct product rule to restrict the export to Russia of products incorporating microelectronics based on US equipment, software or technology.

Britain has also promised stiff sanctions, with British deputy prime minister Dominic Raab telling the UK’s Sky News there would be “very serious consequences if Russia takes this move to try to invade”.

“This morning I already read in all the news publications this conspiracy theory: absolutely unproven, absolutely unfounded,” Murayev said, adding he is considering legal action.

He denied having any contact with Russian intelligence officers and dismissed the idea that he could be in league with the Kremlin as “stupid”, given he was placed under Russian sanctions in 2018.

Though he says he wants Ukraine to be independent from Russia as well as the West, Murayev, has promoted some views that align with the Kremlin’s narratives on Ukraine.

The British foreign ministry declined to provide evidence to back its accusations.

Mykhailo Podolyak, a Ukrainian adviser to the presidential office, said there is doubt among Ukrainians about whether Murayev is “too ridiculous a figure” to be the Kremlins pick to lead Ukraine.

But Russia has propped up previously minor figures in leadership positions in annexed Crimea and separatist-held eastern Ukraine, he added.

Therefore “one should take this information as seriously as possible”, he said.