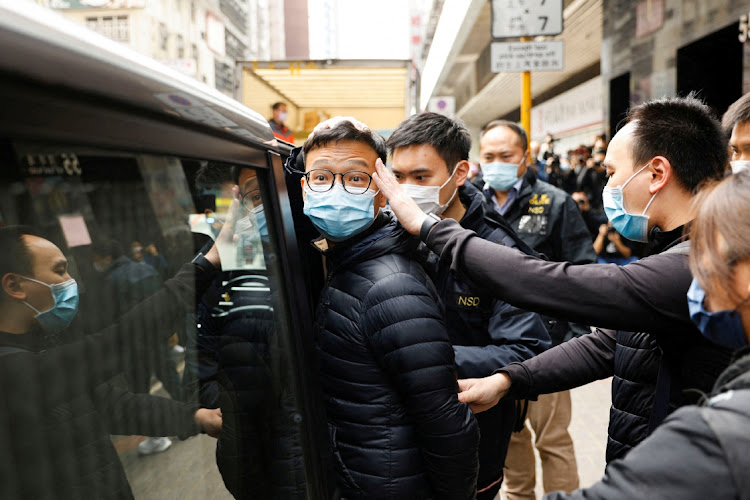 Stand News acting chief editor Patrick Lam is escorted by police as they leave after a search of his office in Hong Kong, China on December 29 2021. Picture: REUTERS/TYRONE SIU

Hong Kong — The Hong Kong government is expanding its use of a long-dormant sedition law in what some lawyers and democracy advocates say is intensifying a squeeze on press freedom.

Authorities haven’t given details of what led to the charges. Pro-Beijing media outlets Ta Kung Pao and DotDotNews listed specific Stand News articles that they deemed seditious, including interviews with local democracy activists and opposition figures — topics that until recently were not out of the ordinary in Hong Kong.

A day earlier, prosecutors levelled a new charge of sedition against Jimmy Lai, 74, founder of the now shuttered Apple Daily newspaper and some of his top executives.

The charge of sedition, inciting resistance or insurrection against central authorities, stems from colonial-era laws designed to thwart dissent against the British crown and hadn’t been used in Hong Kong since the mid-1960s until recently, three legal scholars interviewed by Reuters say. Last month’s sedition charges were the first to be brought against the media since 1967, according to those scholars.

Some legal scholars say recent court judgments have empowered authorities to use the controversial national security law (NSL) imposed on the city by Beijing in 2020, to bolster colonial-era laws, including sedition.

The security law, enacted after sometimes-violent, pro-democracy protests rocked the city in 2019, gives police extra powers of search, seizure and surveillance and makes it tougher for those arrested to get bail. Only judges selected for national security duties will handle cases under the law.

The sedition law allows officials to directly target the published content of media operations and prosecutors aren’t required to prove that an offending article or speech was intended to be seditious, according to three lawyers.

“To some extent, the government is better armed now,” said Simon Young, a professor at the University of Hong Kong’s law school. “The national security law provides an enhanced procedural and investigative framework to bring these charges.”

A barrister whose career has straddled Hong Kong’s handover from Britain to China in 1997, said: “We can see that at a stroke, the NSL has retooled these old laws that were largely forgotten. You could say we are now drinking bitter, old colonial wine from new, authoritarian bottles.”

Asked whether the security legislation had enhanced the powers of colonial-era laws such as sedition, the Hong Kong Department of Justice declined to comment but said the prosecution of offences endangering national security was “based on admissible evidence”.

“We express our deep regret regarding the governments, media and organisations of the United States and Western countries in respect of their attempt to twist facts and slandering remarks on the enforcement actions taken in accordance with the law,” a government spokesperson said.

The actions against Stand News targeted “illegal acts” and had “nothing to do with freedom of the press”, he said.

The latest moves extend a media clampdown over the past year that included the shutdown of Apple Daily and the imposition of fresh staff guidelines on public broadcaster RTHK to ensure all content complies with the national security law.

Broadly defined by legal scholars as a crime of incitement to resist or insurrect, in words or acts, against legal authority, the sedition laws in Hong Kong and elsewhere have long been seen as British colonial relics overtaken by more modern statutes.

According to Hong Kong's Crimes Ordinance — the legislation that details sedition offences — it is a crime to publish anything that brings “into hatred or contempt or to excite disaffection against ... the government of Hong Kong”.

Despite the tough language, some lawyers and academics said they had long believed sedition offences would be difficult to enforce. Freedom of speech and other rights protections have been written into more modern laws, including Hong Kong’s Bill of Rights and the Basic Law, the former British colony’s mini-constitution since its handover to Beijing in 1997.

Ten academics, criminal lawyers and diplomats said their views had changed because the NSL’s powers can be applied to older laws, such as sedition.

Some provisions of the NSL refer generally to acts “endangering national security”, which judges have ruled effectively extends the law’s reach to cover older, pre-existing laws that involve national security, such as sedition and espionage.

‘The trigger point was the fate of Stand News,’ said Chris Yeung, the chief writer at Citizen News
World
3 weeks ago