It is worrying that some decisions are not informed by science, Cyril Ramaphosa says 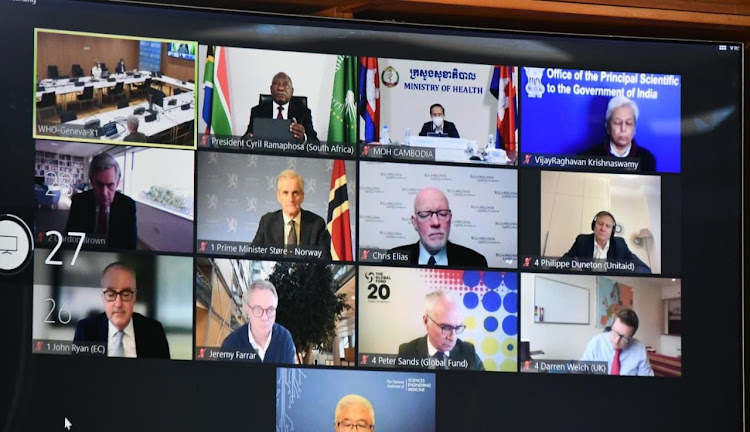 President Cyril Ramaphosa has renewed his attack on countries that have isolated Africa in response to SA’s announcement of the Omicron variant of Covid-19.

Addressing fellow members of the Access to Covid-19 Tools (ACT) Accelerator Facilitation Council on Thursday, Ramaphosa said: “We should be concerned that some decisions are no longer informed by science.

“This pandemic has shown how we respond to a truly global crisis. It has shown several shortcomings and weaknesses. But we can and must improve.”

On Monday, during his four-nation tour of West Africa, Ramaphosa accused powerful nations of hoarding vaccines and a knee-jerk response to Omicron.

“They ordered more vaccines than their populations required and when we wanted vaccines, they kept giving us the crumbs from their tables,” Ramaphosa said at the Dakar International Forum on Peace and Security in Senegal.

On Thursday, he said the eighth meeting of the ACT council was as important as its first.

“Even before the emergence of the new Omicron variant, many countries were experiencing rising infections, increasing hospital admissions and deaths,” he said. “As the events of the past few days have shown, we live with the threat from mutating variants which have the potential to unleash further devastation in communities globally.

“And yet, several countries have decided to isolate a number of countries on the African continent.”

Ramaphosa said vaccine inequality was dangerous and also completely avoidable. “A year into the world’s most ambitious vaccination drive, no country should lack sufficient access to vaccines.

Ramaphosa called on world leaders to fully fund the accelerator's strategic plan “so that we can end this pandemic, not just for some, but for everyone, especially in the most vulnerable communities”.

The ACT Accelerator was launched in April 2020 as a global collaboration among governments, scientists, business, civil society, philanthropists and global health organisations. It aims to accelerate the development and production — as well as equitable access to — Covid-19 tests, treatments and vaccines.

Ramaphosa said: “We must invest in strengthening health systems because health systems are what turn vaccines into vaccinations and tests into testing. We need research and development to adapt our tools and stay ahead of this mutating virus.

“We need the full suite of countermeasures — vaccines, treatments, tests, functioning health systems and personal protective equipment — to fight Covid-19 and save lives. And the world needs the ACT Accelerator to make this happen.”

Greed the West has shown over Covid-19 vaccines is damning, Cyril Ramaphosa says

‘Our lives in Africa are just as important as their lives in Europe, North America and all over,’ the president says
National
6 months ago

PETER ATTARD MONTALTO: Extremes and choices in the year ahead

PETER ATTARD MONTALTO: Extremes and choices in the year ahead