President Joe Biden will tell Xi Jinping that China must ‘play by the rules of the road’ like a responsible nation, a senior US official says 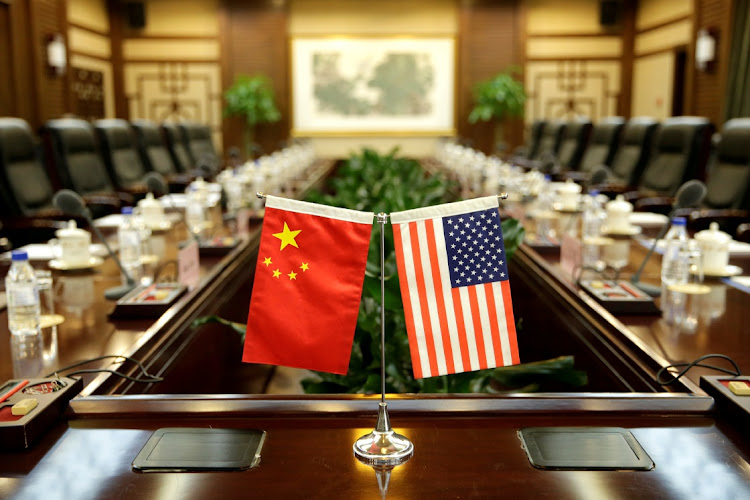 US and China flags ahead of a meeting in Beijing, China. File photo: REUTERS/JASON LEE

Washington — US President Joe Biden will tell Chinese leader Xi Jinping at a virtual meeting on Monday meant to reduce the chances of a superpower conflict that China must “play by the rules of the road” like a responsible nation, a senior US administration official said.

The video dialogue, initiated by Biden and expected by the US to run for several hours on Monday evening, Washington time, will be about setting terms for future US-China competition, the official told reporters.

Both sides hope the most extensive talks between the leaders since Biden became president in January will make the relationship less acrimonious.

The US and China, the world’s biggest economies, disagree on the origins of the Covid-19 pandemic, Beijing’s expanding nuclear arsenal and its stepped-up pressure on Taiwan, among other issues.

“This is an opportunity for President Biden to tell President Xi directly that he expects him to play by the rules of the road, which is what other responsible nations do,” the official told reporters, citing a litany of US concerns, including China’s economic “coercion” of US allies and alleged human rights abuses.

Biden is focused on writing those rules “in a way that is favourable to our interests and our values and those of our allies and partners”, the official said, adding that talks with China must be “substantive and not symbolic”.

Presidents Biden and Xi will meet on Monday November 15 2021 in what's being dubbed a virtual summit designed to prevent misunderstandings between China and the US at a time of strained relations. Bloomberg’s Stephen Engle reports on “Bloomberg Daybreak: Asia.”

“This is not a meeting where we expect deliverables to be coming out,” the official added.

US officials have played down the possibility of progress on trade, where China is lagging in a commitment to buy $200bn more in US goods and services. Not on Biden’s agenda are US tariffs on Chinese goods that Beijing and business groups hope to be scaled back.

The official declined to answer questions on whether the US will send officials to the Beijing Winter Olympics in February. Activists and US lawmakers have urged the Biden administration to boycott the Olympics.

Xi, looking ahead to the games and a Communist Party Congress next year where he is expected to secure an unprecedented third term, is also keen to avoid heightened tensions with the US , while pushing back over the Taiwan issue.

“The Taiwan question is the ultimate red line of China,” the Global Times, a tabloid published by the ruling Communist Party’s People’s Daily, wrote in a Monday editorial.

Foreign ministry spokesperson Zhao Lijian told a regular briefing on Monday: “It is hoped that the United States and China will meet each other halfway, strengthen dialogue and co-operation, effectively manage differences, properly handle sensitive issues, and explore ways of mutual respect and peaceful coexistence.”

Xi and Biden last week outlined competing visions, with Biden stressing the US commitment to a “free and open Indo-Pacific,” which Washington says faces increasing Chinese “coercion”, while Xi warned against a return to Cold War tensions.

“Both sides hold the other with deep suspicion and are taking substantive steps to compete against the other in economics, security and politics,” said Scott Kennedy, a China expert at Washington’s Center for Strategic and International Studies.

Democrats in Congress want Biden to make nuclear risk reduction measures with China a top priority, after the Pentagon reported that Beijing was significantly expanding its nuclear weapons and missile programs.

Beijing argues its arsenal is dwarfed by those of the US and Russia, and says it is ready for dialogue if Washington reduces its nuclear stockpile to China’s level.

Taiwan is likely to play heavily in the talks, with Beijing and Washington increasingly clashing over the self-ruled island, which China claims as its own.

The Biden administration has been trying to carve out more space for Taiwan in the international system. Beijing has vowed to bring the island back under mainland control, by force if necessary.

US Secretary of State Antony Blinken said last week that Washington and its allies would take unspecified “action” if China were to use force to alter the Taiwan status quo, further muddying the long-held US policy of “strategic ambiguity” as to whether the US would respond militarily.

In a call with Blinken on Saturday, senior Chinese diplomat Wang Yi warned Washington against sending the wrong signals to Taiwan pro-independence forces.

“This is President Biden’s opportunity to show steel, show strength on America’s side, to make it clear that we are going to stand by our allies and that we will not endorse or condone the malign behaviour that China has engaged in,” he said.

Annual growth in Chinese retail sales and industrial output beat forecasts, easing worries about a slowdown in the world’s No.2 economy
Markets
7 months ago