The famous Art Deco hotel, which is now owned by the Chinese state, is scheduled for reopening in 2023 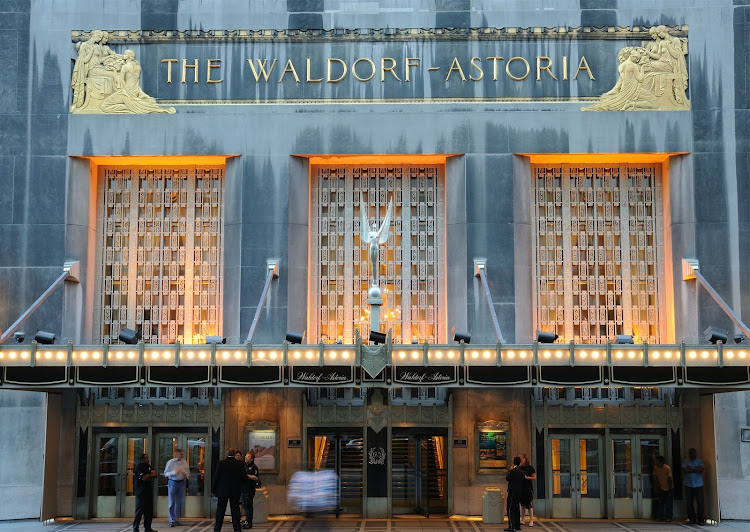 The visitor from China had billions to spend, and he expected more from the Waldorf Astoria.

Wu Xiaohui wanted a fleet of Rolls-Royces to whisk him from a metro New York airport to the storied Park Avenue hotel, where princes and presidents have luxuriated, eggs Benedict was invented and Cole Porter wrote “Anything Goes.” Waldorf staff scrambled.

The billionaire never got his Rolls-Royces, but he did get the Waldorf — one more grand trophy for a flush China looking to throw cash around.

That was then. Today Wu, the man behind the stunning rise and even more spectacular fall of Anbang Insurance Group , is sitting in a Chinese prison. And the Waldorf, now in the hands of the Chinese state, stands as a monument to an era of corporate excess that is being brought to an abrupt and painful end by Beijing and the markets.

As property giant China Evergrande Group teeters and the top two executives of another huge conglomerate, HNA Group, have been taken into custody, the Waldorf is preparing for its next chapter.

And many of the giddy deals that corporate China struck in the 2010s — which at the time provoked comparisons to corporate Japan’s global ambitions in 1980s — have unwound with startling speed. Most of the prestige assets picked up by the likes of Wu have been sold, according to an analysis by Bloomberg. The Waldorf is a rare gem that a Chinese buyer has kept.

Anbang agreed to pay $2bn for the Waldorf in 2014. Wu dreamed of transforming the Art Deco hotel into the Manhattan retreat for China’s elite, according to people familiar with his thinking then. He envisioned condominiums spanning entire floors.

The new Waldorf will indeed have more apartments, even if the space won’t be as expansive as Wu wanted. There will be 375 hotel rooms and 375 condos. Units went on sale last year at prices from $1.8m to $18.5m for four-bedroom units. Penthouses haven’t been priced. The Waldorf team and real-estate brokers were feted last week at a celebration to mark the building’s 90th anniversary.

One of the buyers is Rosemarie Dorothy Bria-Levine. Bria-Levine, 63, a medical doctor, bought a studio for $1.8m. She said she was drawn by resident-exclusive amenities such as private spas, the live-performance stage and the skylit pool on the 25th floor. She dismissed worries about any taint from Wu’s arrest in 2018 or a loss of prestige should American presidents stay elsewhere when visiting New York (President Barack Obama skipped the traditional Waldorf stay after the Chinese takeover and opted for the New York Palace Hotel instead).

As for all that huffing about China buying up New York, Bria-Levine pointed to the kerfuffle that ensued after Mitsubishi Estate of Japan bought control of Rockefeller Center in 1989. Weeks later, the Japanese stock market tanked. By the mid-90s, Mitsubishi was defaulting and billionaire David Rockefeller, property giant Tishman Speyer and Goldman Sachs Group were walking off with Rock Center.

Frank Mahan, an architect for Skidmore, Owings and Merrill, is overseeing a renovation of the Waldorf. The reopening is scheduled for 2023. His team studied paint chips under a microscope while trying to recreate original colours and says updating the Waldorf while remaining faithful to its 1931 ambience has been a particular challenge.

“The Waldorf renovation is the highest degree of difficulty,” Mahan said.

Beijing-based Dajia Insurance Group, created to absorb Anbang, auctioned off various hotel artefacts for charity last year. But the Waldorf is holding on to what have been deemed “historically priceless” items, including the famous Spirit of Achievement statue; the 1893 Columbian Exposition clock that anchored the central lobby; John F. Kennedy’s rocking chair; and Cole Porter’s 1907 grand piano. Today that Steinway adorns the sales gallery.

The workers of the world haven’t always been happy about Communist China’s trophy in the world capital of capital. The Waldorf has become a rallying point for local union protests over a subcontractor involved in the renovation.

One recent afternoon, Scabby the Rat — the giant inflatable rodent that’s been a symbol of New York’s unionised construction workers for decades — sat up on its haunches outside the Waldorf. Gerry Matthews, of the District Council of Carpenters, said the Chinese-owned Waldorf had used a non-union subcontractor for part of the renovation.

While China kept the Waldorf, it struggled to garner interest in the rest of Anbang, which once claimed $30bn in assets. Bidders dropped out of an auction in August and Anbang separately sued a buyer of 15 US luxury hotels unsuccessfully for pulling out during the pandemic. The Delaware court battle unearthed Wu’s ties to political elites, including the family of late Chinese leader Deng Xiaoping, whose granddaughter was Wu’s third wife. Anbang appealed the ruling.

As it turns out, the former car salesman was cooking the books. Wu was sentenced to 18 years for fraud and embezzlement worth billions.

It wouldn’t be the first time some money of questionable origins made its way into the Waldorf. The original hotel was built in the 1890s where the Empire State Building now stands. It was backed by heirs of John Jacob Astor, whose fortune was partly derived from smuggling opium into China against imperial orders.

Dino Michael, in charge of refurbishing the Waldorf Astoria and Conrad in New York, says such jobs take years longer than a pandemic, and wealthy ...
World
1 year ago
Next Article