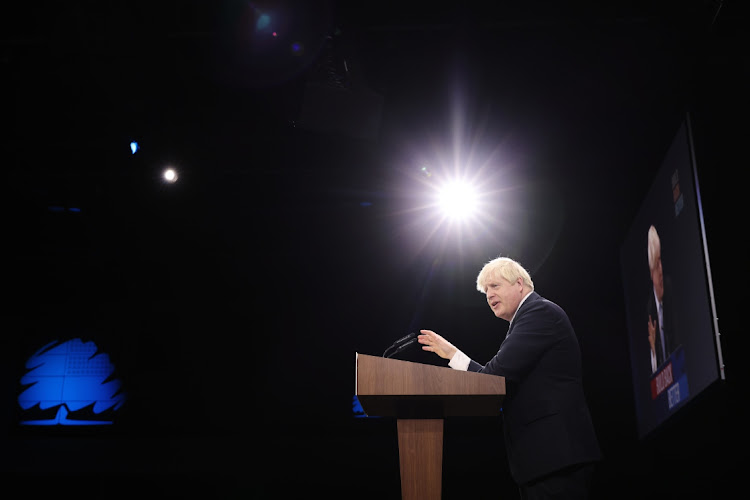 Prime Minister Boris Johnson put forward his vision for a new Britain, investing in skills, narrowing social inequalities and “unleashing” a national spirit. What was less clear, was how he plans to deliver on that optimism as businesses warn of further disruption to the economy.

Johnson’s address to wrap up the Conservative Party conference in Manchester focused hard on the government’s “levelling up” of poorer regions, a policy that has morphed into a catch-all plan to redefine the UK.

“You will find talent, genius, flair and enthusiasm is evenly distributed, but opportunity is not,” Johnson said. There was little on specifics.

Britain’s vulnerabilities have been exposed as the pandemic has receded, and after a week of firefighting Johnson has sought to shift the narrative. The message is that the supply chain crisis that has gripped one of the world’s largest economies is a by-product of a shock therapy that has been long overdue. And it is his government, Johnson said, that has had the “guts” to do it.

A labour shortage has forced the government to deploy soldiers to drive fuel tankers, seen empty supermarket shelves and animals being culled because of a lack of slaughterhouse staff. Johnson said this week that fewer than half the planned emergency visas for truck drivers have been issued.

But this was a speech that should have been made a year ago had it not been for the pandemic. The aim was to reassure voters who had backed the Conservatives for the first time in 2019 that they had made the right choice. Now pressure will mount to set out more detail on the flagship “levelling up” policy and prove it is more than just a slogan.

Johnson rattled through his joke-laden monologue in under 50 minutes. He attacked the opposition Labour party as divided and out of touch with voters. His pitch to the electorate spanned the political spectrum, at once praising bankers and capitalism while also heralding the National Health Service and public services.

The only policy of any note was a commitment to a £3,000 “levelling-up premium”, which would be used to send the best math and science teachers to the schools that need them most.

Johnson barely mentioned the economic turmoil outside the conference, remaining relentlessly positive and taking credit for leading the economy towards higher wages and productivity. Britain cannot return to “uncontrolled immigration to keep wages low”, he said.

The mantra now is that businesses need to wean themselves off cheap labour and get used to the new model. But the strategy carries plenty of risks for Johnson, and industry groups have questioned the economics of it.

The rhetoric might play well among some Conservative rank and file, particularly in poorer northern regions that defected from the opposition Labour party at the last election. It is a stark departure for a leader of what traditionally has marketed itself as the UK’s pragmatic party of business.

Johnson’s northern focus has made Tories in the heartlands uneasy, so he sought to show how his agenda can also benefit them by taking pressure off the “overheating southeast”, easing fears that “your immemorial view of chalk downland is going to be desecrated by ugly new homes”.

The Confederation of British Industry (CBI), meanwhile, is warning of longer-term disruption, with shortages being two-year rather than two-month problems.

“The risk is if we don’t get investment, productivity growth alongside wage growth, it’s unsustainable, and it’s unaffordable,” Tony Danker, the CBI’s director-general, said in an interview at the conference. “I don’t want a high inflation and high tax economy.”

UK companies are facing an “historic surge” in inflationary pressures and manufacturers are poised to increase their prices, according to a British Chambers of Commerce survey published on Wednesday.

But as the prime minister took centre stage, his performance played to a different audience.

Conservatives standing in line to see him before the speech were clear on what they wanted: positivity. One pensioner who had joined the line more than four hours before the speech said he was there to hear the prime minister talk up the UK. And that is what the party got.

“I thought he had style, charm and conviction,” Robin Wight, another grass-roots Conservative who was in the hall clad in a shiny purple jacket, said after the speech. “I think you don’t give policy here, you give energy.”