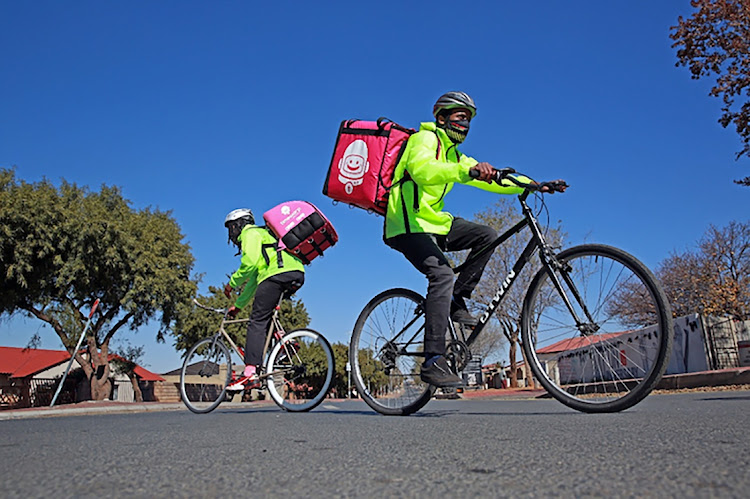 When Londoner Rich Mason signed up as a bicycle food delivery rider in 2017, he found the long hours, poor pay and lack of communication from management “jaw-dropping” — so he started his own delivery app instead.

One of his proudest moments was in June this year when his phone pinged with the first order on his Wings platform, which he says pays bicycle couriers above minimum wage, is an eco-friendly alternative to motorbikes and supports family-run restaurants.

“Our brand is built on community,” he said, adding that Wings also partners with local charities to deliver food to people in need.

The gig economy — where people pick up work in a flexible manner — boomed during Covid-19 lockdowns, as people around the world suddenly needed goods and food delivered to their homes and millions of newly jobless were looking for work.

By 2020, there were more than 777 digital labour platforms — from food delivery to web design — around the world, up from about 140 a decade earlier, according to the International Labour Organisation (ILO).

But many people drawn to gig work for its flexibility have reported being exploited by companies paying low wages, and offering weak insurance policies and no sick leave while encouraging long hours.

“It is always exciting to see communities taking ownership of digital tools for work and production in a way that is fair and inclusive,” said Kelle Howson, a researcher at Fairwork, a gig economy research project at the Oxford Internet Institute.

At the large companies that dominate the gig platform sphere, most delivery drivers are classified as “partners”, not employees, meaning they have flexible work hours but few to no benefits, such as healthcare or paid leave.

But some businesses are using elements of the gig economy — such as reliance on tech, employment flexibility and direct-to-consumer orders — to create both profit and social change.

In 2014, Colombian entrepreneur Diego Benitez launched SiembraViva, an e-commerce platform that connects rural smallholder farmers with consumers while helping the farmers transition to organic produce through training and technical support.

The platform uses a WhatsApp chatbot to gather planting information from farmers to determine their ideal harvesting schedules based on customer demand, reducing waste and guaranteeing an income for the farmers.

“We work to make the fruit and veg supply chains sustainable, inclusive and efficient,” said the 40-year-old former banker, who hopes to expand into other countries in South America in the coming years.

Similar start-ups have sprung up around the world from Namibia to the US, using technology and direct-to-consumer models to help small-scale, organic farmers hold their own against bigger grocery stores.

A core component of the gig economy involves door-to-door deliveries and Spanish courier company Koiki realised they could boost eco-friendly job opportunities for people at risk of social exclusion, such as migrants or homeless people.

Koiki provides the technology, training and parcels for delivery people who are hired by partner charities or organisations, said marketing director Patricia De Francisco, adding that all parcels are delivered on foot or on bike to reduce the company's carbon emissions.

Many of Koiki’s 150 couriers have physical or mental disabilities and they work out of delivery centres in their own neighbourhoods so that the routes are familiar to them, said De Francisco.

“They were the heroes of the pandemic, the only ones on the roads delivering medicine and food to people in need,” she said, adding that all workers are on fixed or flexible contracts aligned with the minimum wage.

“We realise we have to take care of the planet and people if we want to be here longer,” said De Francisco.

The company has trained 300 members of the largely pastoralist community on the shores of Lake Turkana in business and tech skills, helping them enter the international market as web designers, animators and more.

Major gig platforms are beginning to take note of smaller players in the sector, with some incorporating their social impact goals into their own model.

In India, businesses working with temporary staff such as garment and construction workers have begun turning to LabourNet, a training and employment mediator for gig workers that has helped improve work contracts and social security benefits. So far they have helped 8,000 people with the aim of reaching 15,000 in the coming year, said founder Gayathri Vasudevan.

Bigger corporates have also used their capital to fund ethical gig platforms — such as Robinhood — launched by Thailand’s Siam Commercial Bank last year to help small food businesses that had taken a hit during lockdowns.

Launched as part of the bank’s corporate social responsibility  initiative, the app does not charge merchants a fee for listing on the platform, and has drawn 150,000 small food vendors and more than 2-million subscribers.

Co-operatives and enterprises like Wings and SiembraViva say consumer demand and decision making is a huge factor in rethinking the gig economy model.

Customers are getting more discerning about how online services use their money and their impact on communities and the environment, said Mason at Wings.

“People are ready for ethical alternatives ... I hope we will have built up a loyalty in our community that will come through for us and stand with us if an Uber Eats tries to kill us off in a year or two,” he said.

But customer loyalty alone is not enough, said Howson, the gig economy expert.

“To enable (these) enterprises to succeed, we need changes in wider commercial, tax, supply-chain and labour policy settings ... (regulation) should favour companies providing maximum social and economic benefits to local communities,” she said over email.

Social entrepreneurs such as Benitez agree that the gig economy is not going anywhere, but that using elements of the gig model for good would make it both more sustainable and profitable.

“Success is not just about money. We can make money and capture carbon and create equitable supply chains for farmers ... we can do it all, so that the next generation lives in a better place than we do now,” he said.