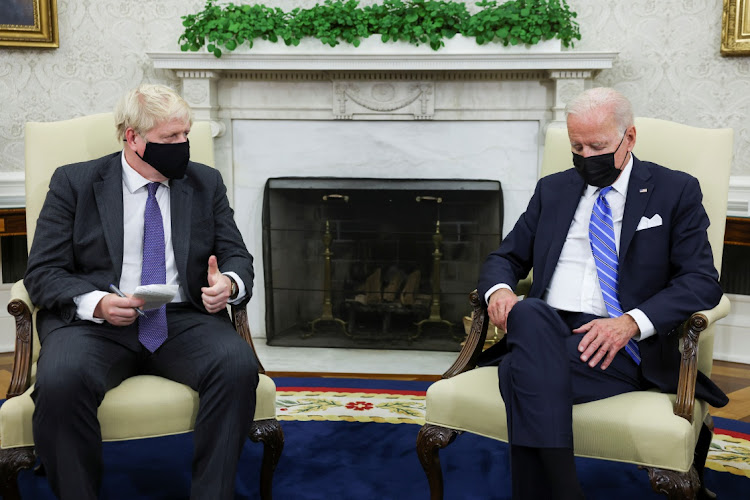 Washington — Boris Johnson talked up a trade deal with the US as one of the prizes of his campaign for Brexit. Sitting in the Oval Office on Tuesday, it was clear the UK leader has little hope of delivering it.

“We’re going to talk a little bit about trade today and we’re going to have to work that through,” US President Joe Biden told reporters at the start of his meeting with Johnson, when asked about the prospects for an agreement.

The lukewarm response comes after the British prime minister himself tried to downplay expectations of progress. On the plane to New York, he told reporters Biden has “a lot of fish to fry” and didn’t have time to negotiate. He also hinted to Sky News he doesn’t expect an agreement before the next UK general election, due in 2024.

Then hours before Johnson’s meeting with Biden came a strategy shift, which also risks coming to nothing. A person familiar with the matter said the UK is exploring joining an existing free-trade agreement between the US, Mexico and Canada, a recognition that the Biden administration won’t start talks on a bespoke deal any time soon.

Yet even the idea is fraught with political risk for Johnson, who remains under pressure to prove the biggest upheaval in British foreign policy in 50 years — divorcing from the country’s largest trading partner — was worth it. Back in 2016, Johnson criticised then-president Barack Obama’s warning that Britain would be “at the back of the queue” for a US trade deal if it voted for Brexit.

As well as the political embarrassment of not delivering on a Brexit pledge, any UK effort to join the US-Mexico-Canada agreement could be interpreted as an effort by Downing Street to play catch-up, given the EU already has separate trade deals with Canada and Mexico.

Trade observers also noted that any attempt to join could take years of wrangling and put UK negotiators in a weak position, at the mercy of three political systems that might not see much incentive to welcome another member — particularly one with an economy about the size of California’s.

“We are still keen to agree a US-UK trade deal,” Johnson’s spokesperson, Max Blain, told reporters in Washington. “That still remains a priority.”

Johnson, who was born in the US, is acutely aware of the UK media’s obsession with the “special relationship”, which was immortalised by Margaret Thatcher and Ronald Reagan in the 1980s. But his relationship with Biden has been far from smooth and there were reminders of why in their opening remarks, especially on Brexit. The president has long been critical, especially over its impact on Northern Ireland, and he warned Johnson again not to do anything to harm the region’s fragile peace.

The president has previously said there would be no chance of a trade deal if Brexit damaged the peace process, while British officials have struggled to persuade the Biden administration that the EU divorce deal needs rewriting.

There have been differences, too, on Afghanistan, after the UK government was left blindsided by the US handling of the chaotic pullout amid little consultation with Nato allies.

Yet the mood ahead of their meeting was lifted by a three-way deal to supply nuclear submarines to Australia, which reinforced the idea of a special bond underpinned by US-UK security interests.

The two leaders also discussed China and Russia in their meeting and agreed to approach the issue based on “shared values,” the UK side said.

Earlier on Tuesday, Biden delivered on one of Johnson’s priorities: securing more US funding to help poorer nations fight climate change. The UK hosts the next round of global climate talks starting late in October.

“It’s fantastic to see the US stepping up and providing a real, real lead,” Johnson said after Biden’s announcement to double the US’s commitment.

The UK hopes the US move will spur other nations to reach the $100bn annual funding target and on Wednesday, Johnson will deliver a stark warning to the UN in a speech about the dangers of climate change.

“It is time for humanity to grow up,” he will say, according to remarks released in advance by his office. “It is time for us to listen to the warnings of the scientists — and look at Covid, if you want an example of gloomy scientists being proved right — and to understand who we are and what we are doing.”

But it is progress on trade — or its lack — that is likely to define perceptions of Johnson’s trip. And in his Oval Office, Biden left little doubt where things stand.

The world needs unity as it faces a 'decisive decade', US leader tells General Assembly
World
10 months ago