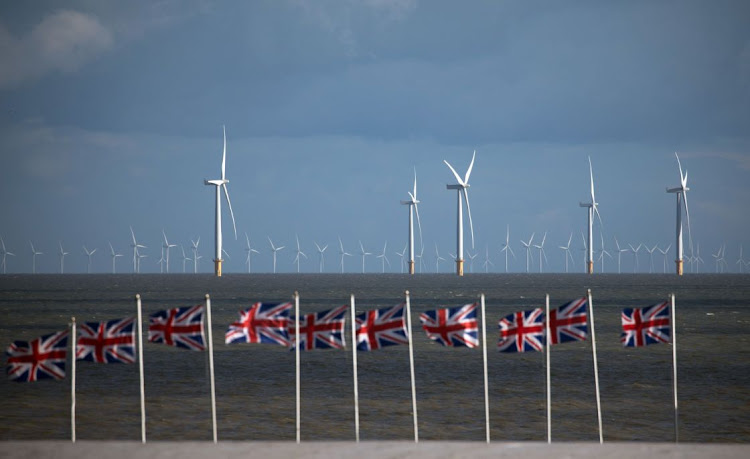 Wind turbines in the North Sea of the coast of Essex, UK. Picture: BLOOMBERG/CHRIS RATCLIFFE

Triodos Investment Management, part of a bank at the forefront of sustainable finance for decades, will not buy the long-promised debt offering next week, saying it is not green enough. While the Dutch money manager has more stringent criteria than most, that has not stopped it from investing in other sovereign green bond sales from the likes of Italy, Germany and France.

“The UK green bond framework is the first one we consider not to be green enough according to our standards,” said William de Vries, director of impact equities and bonds at Triodos, which managed €6.1bn up to June 30.

Triodos is concerned about the proceeds of the debt being used for carbon-capture technology and so-called blue hydrogen. Both are integral to the UK government’s plan to cut emissions, with the nation planning to issue at least £15bn in debt this fiscal year to finance such projects.

“We have a serious problem with these types of projects because we don’t think carbon capture projects will add to carbon reduction in the end,” De Vries said.

Investment is pouring into carbon capture, involving burying carbon dioxide deep underground, yet it is controversial as it is unproven on a large scale and activists argue it could become a distraction from reducing emissions. Blue hydrogen is made from natural gas and requires byproduct carbon dioxide to be captured, whereas green hydrogen is produced from renewable sources through water.

According to a UK investor presentation earlier this month, green gilts can finance both green and blue hydrogen. That may be a fillip to the UK industry, with Royal Dutch Shell and BP — mainstays of the FTSE 100 stock index — among oil firms pursuing blue hydrogen.

The funding effort still leaves Britain as a latecomer to the green bond market, with most West European countries including Ireland, Spain and Belgium having sold such debt. While a boom in global sales looks set to take ethical debt issuance towards $1-trillion this year, deals in sterling remain a small fraction of that. Some market analysts expect the UK’s debut to encourage more British issuers to join in.

The green gilt framework has been welcomed by other ethical investors, who praised its reporting requirements on the social benefits of green projects. De Vries also liked the social element — in vogue amid the pandemic — and hoped other issuers would adopt similar mechanisms.

Still, for Triodos, whose roots in sustainable investing go back to 1968, the problems over the spending are insurmountable. It is now part of a growing breed of specialist ethical investors that are becoming more activist, focusing on driving change. They are rejecting assets that the broader universe of data-driven environmental, social and governance funds snap up. That is leading to splits over what counts as a green investment, amid concerns over greenwashing by some borrowers.

“We have had doubts and questions with other green bond frameworks, for instance the Belgium one, but after consulting with them we decided to give them the benefit of the doubt,” De Vries said. The UK’s “allocation to carbon capture solutions makes this not possible.”