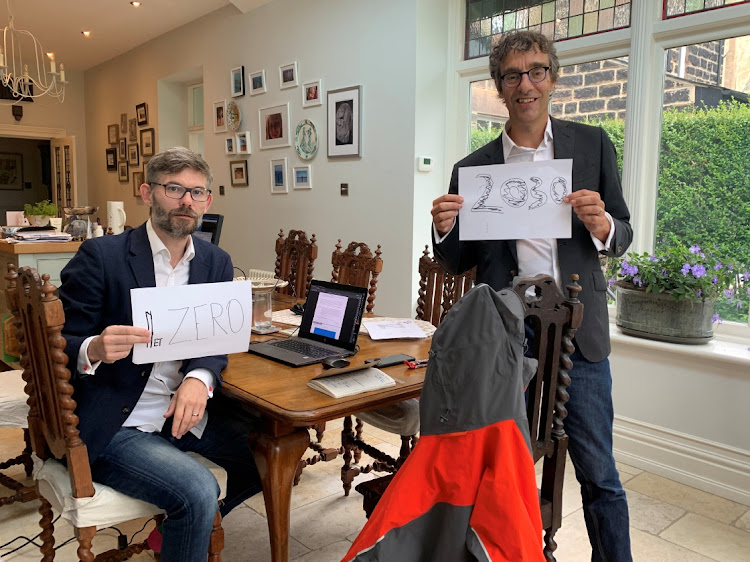 Scientists Joeri Rogelj and Piers Forster hold up signs urging reduction in carbon emissions after completing a major UN climate report, in a house in Harrogate, Britain, in this photo taken on August 7 2021. Picture: STELLA FORSTER/HANDOUT VIA REUTERS

Geneva — After spending hundreds of hours in virtual meetings to complete this week’s landmark UN climate report, scientists Piers Forster and Joeri Rogelj celebrated in a way their peers could not: by hugging.

Britain-based Forster had been weary of the isolation during the Covid-19 pandemic and invited his co-author to work alongside him in his Harrogate kitchen as they worked with other scientists around the world to thrash out the final version of the report by the Intergovernmental Panel on Climate Change.

Being together for the last stretch of a three-year effort “made it more fun”, said Forster, a climate physicist at the University of Leeds.

“My neighbours must have thought us mad though hearing ‘thank you madam co-chair’ in response to questions from St Kitts, India, or the kingdom of Saudi Arabia, coming through at 4am.”

When the more than 700 scientists and government delegates finally approved the last part of their 3,949-page report over the weekend, they all erupted into cheers, each separated in their own little frame, except for Forster and Rogelj. A Zoom screenshot shows the two smiling out from the same box.

This year’s report, warning that the world is dangerously speeding towards runaway climate change, took years of painstaking effort to pull together.

Specialist scientists, all 234 of them working for free, reviewed more than 14,000 scientific studies published since 2013 to draft the latest version of what has now become the established science on climate change, before coming together — virtually — for two weeks of final checks and negotiations.

Despite travel restrictions and national lockdowns that delayed the report’s completion for several months, organisers say they pulled off the effort with no notable technical glitches to meet their revised deadline.

For many of the scientists, the effort came with a personal cost. “You put a lot of yourself in it,” said ETH Zurich climate scientist Sonia Seneviratne, who had to skip a family holiday to help finish the report.

While scientists praised the inclusion of colleagues from 65 countries across the globe, some said the resulting time-zone challenges were bad for their sleep.

“We could not find any time slot that wasn't two o’clock in the morning for somebody,” said Michael Wehner, a climate scientist at the Lawrence Berkeley National Laboratory in California.

Completing the politically sensitive “summary for policymakers” section, which 195 governments must approve by consensus, presented a particular challenge. Each word of each sentence needed to be scrutinised and debated.

To help the effort, organisers displayed each sentence in yellow on a shared screen until it was approved, at which point it appeared in green. If it was rejected, it turned blue, signalling a revision was needed. Disputes then had to be resolved in virtual breakout sessions.

“We spent sometimes hours on a footnote,” said co-chair Valerie Masson-Delmotte, a climate scientist at the University of Paris-Saclay who described work on the report as a “marathon”.

One scientist in India even called by phone to attend a meeting while a tropical cyclone wailed outside his window, having already cut off his electricity and internet, she recalled.

But Masson-Delmotte said the chance to work on pioneering climate research with so many scientists around the world was “one of the biggest joys of my professional life”.

She took strolls in a park among flowers to relax between sessions. Others said they bonded while getting to know each other’s pets and children, who frequently popped up in the background during video calls.

But for some, the loneliness at times was grinding. Rogelj, a climate scientist at Imperial College London, said it was helpful to be able to work alongside Forster over the last two weeks,  just to exchange ideas, or to vent.

“You can do everything that makes us human, that you can’t do through a screen,” he said. “If I would have been alone in my room, it would have been much harder to achieve this.”