The Holy Grail is translating the numbers into how much each ton of CO₂ costs society and, thus, should cost those doing the polluting 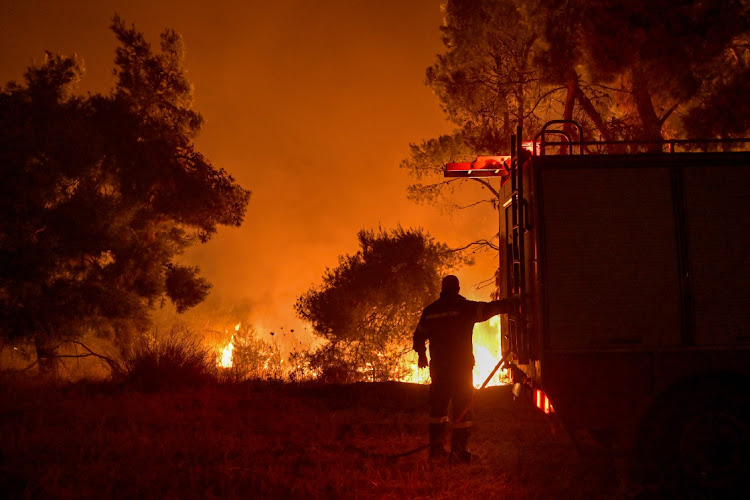 Firefighters try to put out a fire as flames spread over a highway during a wildfire in northern Athens on August 5 2021 in Athens, Greece. Picture: GETTY IMAGES/MILOS BICANSKI

Scientists on the Intergovernmental Panel on Climate Change, a global group backed by the UN, have spent the past two weeks in meetings to ready their latest assessment of the physical science underpinning past, present, and future climate change. Expect the IPCC to paint a sobering picture of what is to come. The steep costs of such a world are all too apparent, but tallying them is harder still.

That latter bit is the bread and butter of climate economics: accounting for climate damages in dollars and cents. The Holy Grail is translating those numbers into how much each ton of CO₂ costs society and, thus, should cost those doing the polluting. It’s important but thankless — more like boring accounting than cutting-edge economics.

Seeing how it takes years to assess the latest science, with 234 authors from all over the world working through more than 14,000 studies, adding economics on top of that implies an even greater lag between the latest observed climatic changes and a full accounting of their impacts.

“I think it’s now clear that economists have underestimated the costs of climate change,” says Naomi Oreskes, a historian of science at Harvard University. By now there are plenty of broadsides against climate economics: the discipline has “failed us,” the awarding of the first-ever Nobel in climate economics may have done “more harm than good,” and even calls for economics to undergo “a climate revolution.” The discipline does need change, and I should know: I’m a climate economist quoted in one of those broadsides and the co-author of another. Yes, many of these critiques are self-reflective, coming from within.

Criticising, of course, is easy. Pinpointing the specific reasons for why economists have traditionally underestimated climate costs, and then improving on those shortcomings, is much harder.

One reason — and speaking from my own experience — is the objective difficulty in tallying costs. Doing so “bottom-up,” one heatwave or hurricane at a time, is a punishing undertaking. That has led climate economists to make often heroic assumptions that allow them to estimate climate damages “top-down” with guesstimates of how climate damages affect the economy. That’s how we calculate total economic damages for each degree of global average warming.

No surprise, such an exercise misses a lot of detail. It’s not yet clear, though, that this top-down process would necessarily lead to underestimates. Perhaps climate economics, as a discipline, has coalesced around progressively more aggressive assumptions that end up overestimating climate costs?

To glean some more insights into this question, I went back to Oreskes’s book, Why Trust Science? The book focuses on the physical climate science and the inherent “conservatism” of the discipline. I also checked in with her about climate economics specifically.

Oreskes sees parallels between the natural and social sciences. “This may be, in part, another instance of what my colleagues and I documented in physical climate science: the tendency to underestimate the rate and magnitude of climate change that we called ‘erring on the side of least drama,’” she wrote in an email exchange this week. Oreskes sees that tendency as very much part of scientists’ DNA: “The scientific conception of rationality as sitting in opposition to emotion, leads many scientists to feel that it is important for them to be ‘sober,’ dispassionate, unemotional, and ‘conservative.’ This often leads them to be uncomfortable with dramatic findings, even when they are true.”

There are indeed some countervailing forces. Dramatic headlines might be a good way to gain notoriety. But climate science and climate economics are still very much scientific disciplines, where progress happens one journal article at a time. Often the best way to advance the discipline — and have your own paper pass peer-review — is to aim for incremental progress.

Climate economics may have two other factors at play. One Oreskes discussed in an op-ed she co-authored with Lord Nicholas Stern: climate effects are likely to be cascading, and economists may be lacking the tools to specifically deal with these cascading effects. Economists are wont of compartmentalising . Tackling one problem at a time has its clear advantages, but as I have argued (with the European Climate Foundation’s Tom Brookes), “marginal thinking is inadequate for an all-consuming problem touching every aspect of society.”

The second reason Oreskes identified has more to do with the overall orientation of the field of economics. She said it has “tended to be over-confident about the power of markets, and reluctant to acknowledge market failure on the grand scale.” It also speaks to how economics is often taught in a classroom. The typical introductory economics textbook waxes poetic about the power of markets and describes in detail how market forces work. Much less time goes into instances when they fail, and global warming surely ranks at the top of that list.

Of course not every number generated by climate economists, or every policy pronouncement, will be conservative. But it’s important to recognise the inherent delays and biases of the scientific enterprise as a whole. The same reasons why we can trust climate science overall leads to IPCC reports being inherently conservative in their overall assessment — and why climate economics has straggled behind in its policy recommendations.

Gernot Wagner writes the Risky Climate column for Bloomberg Green. He teaches at New York University. His book “Geoengineering: the Gamble” is out this spring. Follow him on Twitter: @GernotWagner.