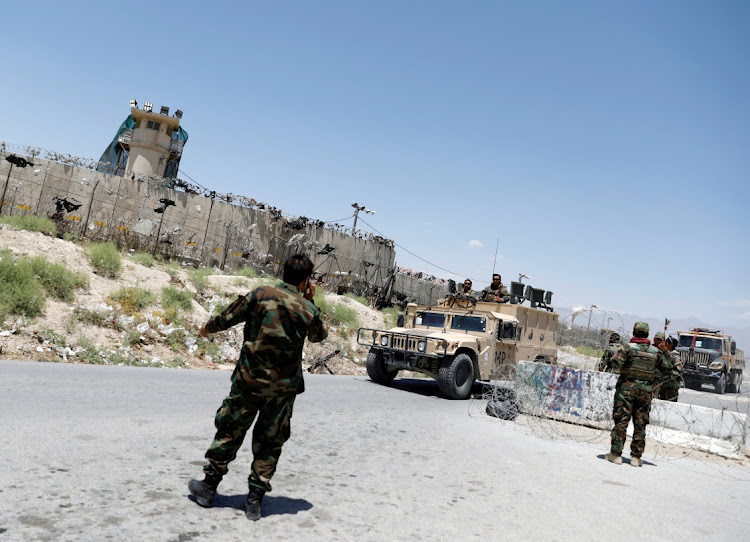 Afghan soldiers stand guard at a checkpoint outside the US Bagram air base in this July 2 2021 file photo. Picture: REUTERS/MOHAMMAD ISMAIL

Turkey has blasted the US for recommending that Afghans fearful of a vengeful Taliban seek asylum in the US from third countries.

“Turkey does not, and will not, serve as any country’s waiting room,” Turkish President Recep Tayyip Erdogan’s communications director, Fahrettin Altun, told Bloomberg on Wednesday. “We will continue to do everything in our power to preserve the safety of our borders.”

Advocates for Afghans who assisted the US military and other coalition forces say they fear they’ll be killed by Taliban. Tens of thousands of Afghan families are already fleeing the group’s advances as US forces prepare to complete their withdrawal by the end of the month.

In recent days, the Biden administration began evacuating several hundred Afghans who worked for the US-led coalition to the US, and it anticipates relocating thousands more. On Monday, the state department said cases referred to its relocation programme would be processed in third countries, and cited Turkey as a potential venue.

The number of people eligible for that programme is limited, however, and Turkey fears many more Afghan refugees will reach its borders and remain there.

“We do not accept the irresponsible decision taken by the US without consulting our country,” foreign ministry spokesperson Tanju Bilgic said late on Tuesday. “If the US wants to take these people to its country, it is possible to transfer them directly to their country by planes.”

Turkey, he said, doesn’t have the capacity to take in more refugees. Anticipating a larger migration flow from Afghanistan, Turkey recently erected high concrete walls to seal parts of its eastern border with Iran, after doing similar in the south to reduce the number of migrants from Syria.

Turkey already hosts the world’s largest refugee population of about 6-million people, and as tens of thousands of Afghan refugees follow in the footsteps of Syrians and Iraqis, its hospitality has gone cold. An economic decline has made jobs short and prices rise, fanning anger at government policy under Erdogan.

The EU recently announced billions of euros in additional financing to support Turkey for hosting refugees under a programme designed to prevent their migration to Europe.