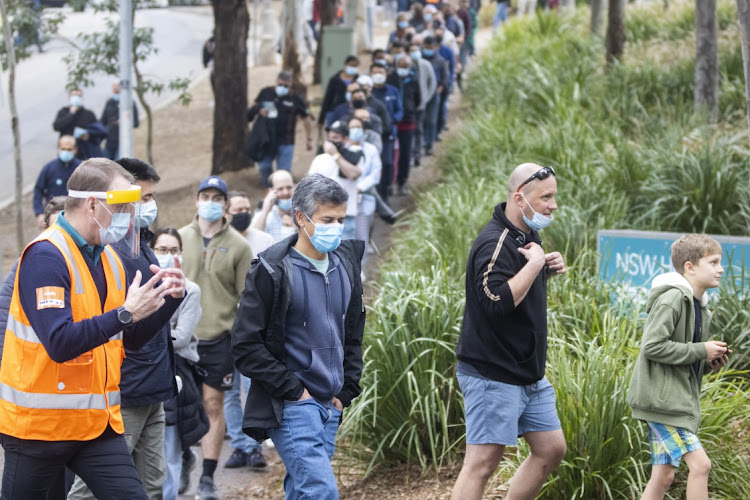 Long queues of people are seen at the New South Wales Covid-19 vaccination centre in Homebush on July 1 2021 in Sydney, Australia. Much of Australia is in lockdown or subject to some form of restriction as community cases of the delta variant continue to be recorded around the country. Picture: JENNY EVANS/GETTY IMAGES

Canberra/Sydney — After winning plaudits for an initial coronavirus response that avoided the heavy death tolls seen in the US and Europe, Australia’s sluggish vaccine rollout plan has transformed the country into a pandemic laggard.

The Bloomberg Vaccine Tracker shows the nation is ahead of only near neighbour New Zealand among the 38 Organisation for Economic Co-operation and Development nations in administering doses. Australia has provided enough jabs for just 14.7% of its population, falling behind many small economies including Morocco at 25.4%, Azerbaijan with 17% and the tiny South American nation of Suriname at 15.5%.

Hit by supply-chain holdups from contracted drugmakers, Prime Minister Scott Morrison is finding the failure to secure more doses from a wider range of sources is having long-term implications — maybe even for his re-election bid in 2022. About half the nation’s population of 25-million people are currently in a form of business-crippling lockdown, as health authorities race to stamp out continentwide outbreaks of the delta variant.

In stark contrast to freedoms enjoyed by Australians just months ago, stay-at-home and mandatory mask-wearing orders have been imposed in major cities such as Sydney, Brisbane and Perth. On Wednesday, they were joined by the remote Outback town of Alice Springs.

Whether it’s watching the crowds flock to the Wimbledon tennis tournament in London or life returning to relative normality in the US, Australians’ patience with Morrison’s tardy rollout may be starting to wear thin. A poll released on Monday showed his conservative government slipped two percentage points behind the main Labour opposition, reversing a four-point lead three months ago.

“Australians are well aware of the mass-vaccination campaign being co-ordinated in the US.” said Helen Pringle, a political researcher at the University of New South Wales. “They’re becoming increasingly aware that their pandemic battle isn’t ending any time soon, and we’ve missed an opportunity to set a global gold standard in achieving ‘Covid normal’.”

Alongside other so-called “Covid-zero” nations such as China and Singapore, the persistent outbreaks show the limits of Australia’s strategy to beat the pandemic with closed international borders and rigorous testing. The Labour opposition says the delta variant is responsible for more than 20 virus leaks out of the nation’s quarantine hotels, with cases also linked to mineworkers and airline crew who have travelled around the nation.

Morrison is also being blamed for confused messaging about the safety of the AstraZeneca vaccine, which has been linked to rare blood clots. State and territory leaders have also said his government isn’t supplying enough doses, and has been opaque about the amount they will receive and when.

The government is defending its position, saying more supplies are on their way.

“Our road map out of this is about progressively opening up” through ramping up the rollout, Australian health ninister Greg Hunt told Sky News on Wednesday. He said messaging around the nation’s vaccination programme had a “focus on safety”.

In the meantime, Australians are likely to face continued, temporary lockdowns whenever virus cases are recorded in their communities — a particular threat during the ongoing winter months.

While the economic implications are perhaps limited to tourism operators and retailers while the disruptions remain temporary, Bloomberg Intelligence economist James McIntyre said the nation’s slow reopening will affect international travel and could see it miss an opportunity to lure skilled migrants, crimping the nation’s potential growth relative to other economies.

“The botched vaccine rollout risks tarnishing the perception that Australia has succeeded in its management of the pandemic,” McIntyre said. “Confidence in Covid containment was supposed to be a factor boosting Australia’s relative attractiveness in a post-Covid world.”

With elections due by May, that will have Morrison nervous, according to the University of New South Wales’s Pringle.

“Voters were very tolerant of mistakes by the government last year — they were aware that it was facing a pandemic for the first time in the modern era,” she said. “But now many will feel Morrison has tried to lull them into a false sense of security.”