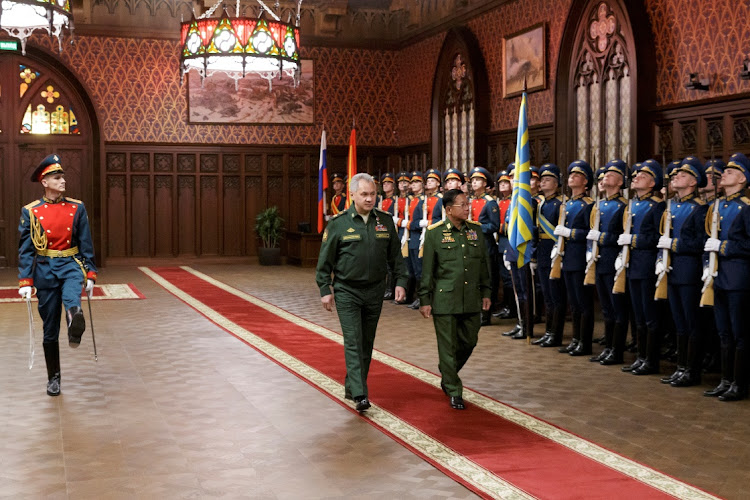 Russia's defense minister Sergei Shoig, left, and Myanmar's commander in-chief senior general Min Aung Hlaing walk past the honour guard prior to their talks in Moscow, Russia, on June 22, 2021. Picture: MINISTRY OF DEFENCE OF THE RUSSIAN FEDERATION/HANDOUT via REUTERS/VADIM SAVITSKIY

Human rights activists have accused Moscow of legitimising the junta, which seized power in a Feb. 1 coup, by continuing bilateral visits and arms deals.

“We are determined to continue our efforts to strengthen bilateral ties based on the mutual understanding, respect and trust that have been established between our countries,” RIA quoted Shoigu as saying at a meeting on Tuesday.

Min Aung Hlaing was in the Russian capital to attend a security conference and had earlier met Nikolai Patrushev, the secretary of Russia’s Security Council.

Defence ties between the two countries have grown in recent years with Moscow providing training and university scholarships to thousands of soldiers, as well as selling arms to a military blacklisted by several Western countries.

Little light was shed on how co-operation between Russia and Myanmar may develop and whether Moscow would be willing to sell more military equipment there.

Since the army seized power and removed Aung San Suu Kyi’s elected government, troops have put down pro-democracy demonstrations and strikes and killed or arrested hundreds of protesters.

Addressing a Moscow conference on Wednesday, Min Aung Hlaing repeated that the army took power by force because Suu Kyi’s party won the election through fraud — an accusation rejected by the previous election commission and international monitors.

With Myanmar being one of the traditional export markets for Russian weapons, rising tensions there provide Moscow with a good chance to increase military sales, said Alexey Kirichenko, Associate Professor at the Institute of Asian and African Countries at the Moscow State University.

“This makes it possible for Russia to conclude lucrative contracts ... The situation in the country is very difficult, and the Burmese military needs to build up their military potential,” he said.

Russia said in March it was deeply concerned by the rising number of civilian deaths in Myanmar. President Vladimir Putin does not plan to meet Min Aung Hlaing on his visit to Moscow, the Kremlin said.

UN High Commissioner for Refugees says for the  first six months of 2021 there will probably be a further increase from the 82.4-million displaced
World
11 months ago

The accusations related to the alleged misuse of land for the charitable Daw Khin Kyi Foundation, which she chaired, as well as earlier accusations ...
World
11 months ago
Next Article