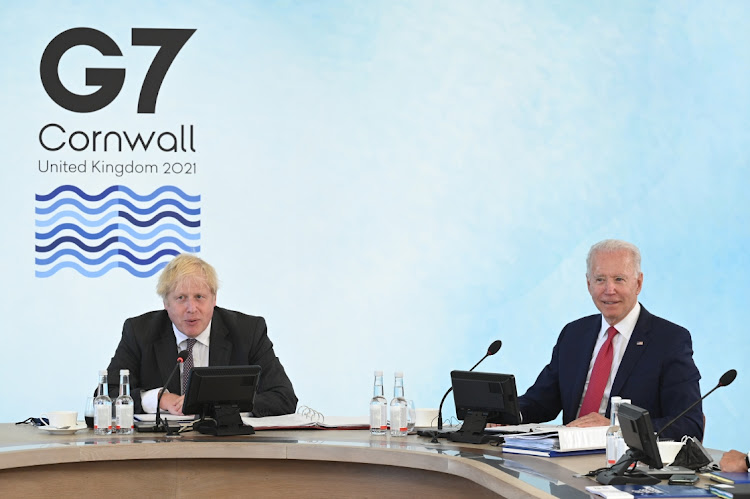 Washington — Group of Seven (G-7) leaders meeting this weekend in England are discussing plans to counter China’s effort to win influence around the world and rebuke the country over forced labour practices, according to two US officials.

The leaders are planning a co-ordinated infrastructure initiative for developing countries, the officials said, after China has gained leverage by financing projects beyond its borders.

President Joe Biden also is asking the gathering to condemn what he calls China’s use of forced labour, including the government’s treatment of its Uyghur Muslim minority in the western Xinjiang region.

Additionally, the leaders for the first time are expected to directly mention security challenges posed by China in a joint communique issued at the end of the summit.

The G-7 will launch a green alternative to China’s Belt and Road trade and infrastructure initiative at the summit, Bloomberg reported previously. The strategy, expected to be called the “Clean Green Initiative”, would provide a framework to support sustainable development and the green transition in developing countries, people familiar with the matter said at the time.

The totality of the work is designed to offer an explicit contrast between Beijing’s approach to foreign relations and the alternative offered by industrialised democracies, according to the officials who briefed reporters on the plans on the condition of anonymity. Biden has in recent months argued the world is at an “inflection point” in a struggle between autocracies and democracies.

“We’re going to make it clear that the United States is back and democracies of the world are standing together to tackle the toughest challenges and the issues that matter most to our future,” Biden said on Wednesday on arriving in the UK for the summit in Cornwall.

China has worked to build international alliances by underwriting infrastructure projects in dozens of countries. Beijing also is sending coronavirus vaccines to the developing world, bolstering its international standing in places like Latin America and Southeast Asia through donations.

The G-7 programme, dubbed Build Back Better for the World, is intended as an alternative to the Belt and Road Initiative, a massive trillion-dollar undertaking that has seen Beijing finance a network of infrastructure projects.

The G-7 plan — a play on Biden’s Build Back Better domestic agenda — will offer alternative infrastructure opportunities with a greater emphasis on labour and environmental standards, transparency, and private sector involvement, the officials said.

Yet it’s not clear how — or if — the announcement will substantively change existing infrastructure efforts by the US and its allies in the developing world. The Biden administration will ask Congress to “augment” available development financing resources, one of the officials said.

The leaders are seeking to make the G-7 efforts collectively a more effective counterweight to China’s efforts than individual infrastructure initiatives some member nations have started in recent years.

Biden also plans to press fellow G-7 leaders to take concrete action against forced labour practices. The US hopes leaders will make clear that China’s treatment of the Uyghurs is morally outrageous and unfair economic competition, the officials said. A draft of the communique seen by Bloomberg cites a pledge to better tackle forced labour, but does not mention China by name.

The White House has come under intense pressure from unions, human-rights groups and legislators who demand a ban on imports made with forced labour in the Xinjiang region. Administration officials for months have said they intend to remove forced labour products from US supply chains but have yet to act.

A group of Democratic House members this week asked US Customs and Border Protection to prohibit imports of polysilicon, a crucial material in solar panels, made with forced labour in China, adding that the agency has investigated and promised imminent action three months ago.