The spectre of another global crisis, along with the potential emergence of a deadlier foe, is pushing disease trackers to begin preparations now, even as Covid-19 continues to rage in some regions 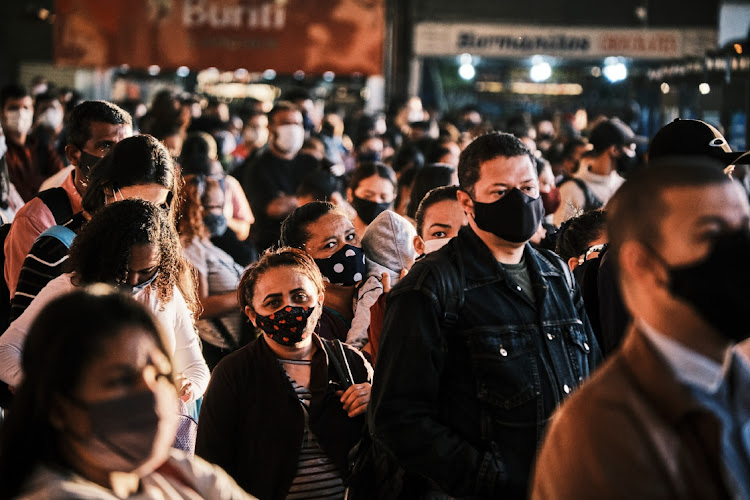 A woman holds a baby as a crowd of commuters line up waiting to board their buses at Rodoviaria do Plano Piloto, the main transport hub in the Federal District, early morning on May 31 2021 in Brasilia, Brazil. Picture: GETTY IMAGES/GUSTAVO MINAS

Covid-19 has been devastating. A future pandemic could be far worse.

If scientists used a scale to classify pandemics like hurricanes, the fatality rate of Covid-19 would probably make it a “category two” out of five, according to Richard Hatchett, a former White House adviser who leads the Coalition for Epidemic Preparedness Innovations.

The spectre of another global crisis, along with the potential emergence of a deadlier foe, is pushing disease trackers to begin preparations now, even as Covid-19 continues to rage in some regions. Researchers and governments want to smash vaccine development records set during this pandemic, harnessing technologies such as messenger RNA, and build a stronger system that can respond swiftly to stop the next outbreaks from exploding when they do occur.

Hatchett’s group envisions a future in which new vaccines against infectious disease could be created within 100 days, a challenge that Britain and the US are embracing. The UK's Chief Scientific Adviser Patrick Vallance and health philanthropist Melinda French Gates are due to outline a road map to world leaders at the Group of Seven summit that started Friday in Cornwall, England.

The effort hinges on contributions from rich governments like the UK and US, which have raced ahead in vaccinating their populations, along with companies developing vaccines and therapies. Last week, the heads of drugmakers including Pfizer Inc., Bristol Myers Squibb Co., Sanofi, Novartis AG, Roche Holding AG and GlaxoSmithKline Plc backed the 100-day mission.

It’s part of a broader campaign that includes an initiative announced last month by the World Health Organization and Germany. As part of the programme, a new global centre in Berlin will rely on data, artificial intelligence and other advanced technologies to try to predict and prevent major outbreaks. In addition, an independent panel set up by the WHO has proposed an International Pandemic Financing Facility to secure as much as $10bn a year to fund preparedness measures after determining that failures, gaps, and delays allowed the coronavirus to run rampant. So far 3.75-million people have been killed.

Rajeev Venkayya, who developed a US pandemic flu plan and led biodefense efforts in the George W. Bush administration, said the coronavirus and influenza families top the list of global threats, but other pathogens that probably aren’t on scientists’ radar pose significant risks as well. Novel infectious diseases that sicken people have been discovered at an average rate of more than three per year in recent decades. About three-quarters come from animals.

While the virus that causes Covid-19 has spread quickly, infecting an estimated 175-million people, it’s much less lethal than SARS and MERS, two prior coronavirus threats. Hatchett, whose organisation was launched in 2017, said he’s assuming a Covid case fatality rate of 0.5%, which he said could be lower or higher. SARS killed about 10% of patients in a 2002-2003 epidemic, and MERS led to death in 34% of about 2,500 cases recorded since 2012.

A future pathogen could combine the ability to spread easily with a much higher case fatality rate, said Venkayya, now president of Takeda Pharmaceutical Co.’s vaccines business and a CEPI board member. Another possibility is a virus that severely affects parts of the population beyond older adults and people with health conditions. The 1918 influenza pandemic hit people aged 20 to 40 hard, in addition to the old and young, he said.

“One of the concerns I have is that people will limit their imagination to how bad this pandemic was and forget that it could be much worse,” he said. “Some would say this is the crisis. Another way to think about it is that this is a warning for an even bigger crisis we could face in the future.”

Technologies including mRNA, the approach used by Moderna Inc. and the Pfizer-BioNTech SE partnership, are seen as a key pillar of the pandemic strategy. If the world had a solution that could limit warming to 1.5 degrees Celsius, “we’d be all over that,” Venkayya said. “We actually have the equivalent of that for pandemics potentially in our hands.”

RNA vaccines could allow countries that have lacked production capacity to leap ahead, strengthening their ability to react to epidemics, Hatchett said, though a number of hurdles remain. “It’s really important not to get too far ahead of the technology,” he said, “but if I were a country wanting to bet on a technology, that’s the one I would bet on at present.”

Still, a number of hurdles stand in the way. Collecting trial data needs to be done in a safe and rigorous way, and any shortcuts could increase the risk of something going wrong. The next targets also could prove more difficult to tackle than the new coronavirus.

Scientists have succeeded in making multiple vaccines against Covid-19, including products from Moderna, Pfizer, AstraZeneca Plc and Chinese developers, but there’s uncertainty over whether they will be able to replicate, much less increase, the speed and success they’ve achieved over the past year.

“What happens if we get a pathogen and actually the first few vaccines don’t work?” asked Robin Shattock, an Imperial College London professor who has been working on a potential mRNA Covid vaccine. “That’s still something I don’t think we’ve grappled with.”

Given the severity of Covid, countries will recognise the need to ramp up production capacity to fight the next outbreaks, he said. Yet maintaining that focus before and after viruses hit the front page is always a worry.

In early 2019, months before the new coronavirus emerged in China, Shattock gave a presentation at the World Economic Forum in Davos in which he urged a small audience of about 30 people to get ready for “Disease X”— the term used by the WHO and others to refer to unknown pathogens with pandemic potential — and highlighted the potential advantages of RNA vaccines.

At the time, the response was “yeah, yeah you’ve been saying that for 20 years, and it’s never happened,” he said. “We wake up now in the middle of the Covid-19 pandemic, and of course it’s very real.”

Health officials won’t be able to let their guard down when Covid ebbs and economies and societies recover. In 2019, Michael Ryan, head of the WHO’s emergencies program, warned of a new phase of high-impact epidemics, adding that climate change, conflict, antibiotic resistance and increasingly mobile populations are all conspiring to raise the threat level.

CEPI, which is based in Oslo, is in the middle of the campaign to tackle new enemies as it continues to battle Covid. The group is working to accelerate development of vaccines that address variants of SARS-CoV-2, as well as shots that could offer broad protection against multiple coronaviruses.

The group’s new $3.5bn strategy calls for putting clinical trial networks and regulators in a position to move even faster and creating a library of prototype vaccines and other weapons to combat potential threats from about two dozen viral families. Expanding production capacity and boosting surveillance also will be vital, Hatchett said.

As he focuses on infectious diseases, Hatchett said he’s reminded of the progress made against famines, once seen as inevitable and now mostly preventable through early-detection systems.

“There are always going to be outbreaks,” he said. But if the effort to get ready for future pathogens attracts enough support, he said, it could reduce the risks and “potentially take pandemics off the table.”

After a few months of seeking escapism in TV streaming, people rediscovered the joys of reading
Life
1 year ago

Tanzania in line for nearly $600m IMF loan, but first must fess up about Covid-19