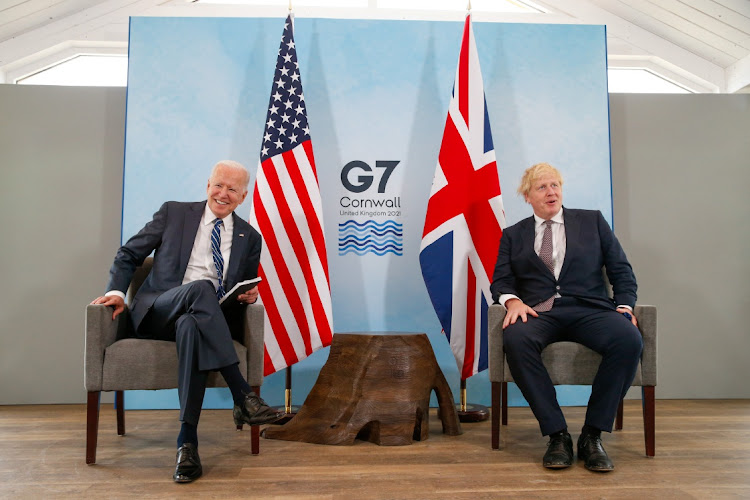 British Prime Minister Boris Johnson and President Joe Biden heaped praise on each other as the two leaders sought to relaunch the UK-US relationship at a time of rising tensions over the fallout from Brexit.

“Prime Minister Johnson and I had a very productive meeting,” Biden told reporters after the leaders met at a beach resort ahead of the Group of Seven (G7) summit in Cornwall, England, on Thursday. “We affirmed the special relationship.”

For his part, Johnson hailed Biden and his team as a “breath of fresh air” and described their conversation as “wonderful.” In an interview with the BBC, the prime minister acknowledged his distaste for the term “special relationship” as a bit of a cliché. He described instead as “indestructible.”

The body language was warm as they met on an overcast day on the English coast, with Biden first greeting Johnson’s new wife, Carrie, before turning to the premier. “We both married way above our station,” the president told the prime minister later.

The pair took pains to emphasise their common ground, despite rising tensions behind the scenes over the fallout from the UK’s split from the EU.

In recent days, the Biden administration has been vocal in public and privately with the British government, raising concerns that an escalating trade dispute between the UK and the EU could threaten peace in Northern Ireland.

But Biden, who famously describes himself as Irish, did not directly push Johnson to fix the argument with Brussels, when they met face-to-face for the first time on Thursday, according to the UK side.

Asked by reporters if Biden had told Johnson to “crack on” and reach a solution with the EU, the prime minister replied: “No he didn’t.” For his part, France President Emmanuel Macron headed to Cornwall striking a defiant tone and saying there was no way that the so-called protocol was up for renegotiation.

The Brexit tensions date back years. Biden opposed the UK’s European divorce and reportedly characterised Johnson as a clone of Donald Trump. Johnson, meanwhile, is the man who personally led the UK referendum campaign to leave the bloc in 2016 and then completed the split at the end of last year.

Despite the difficulties over Brexit, there is still a lot the two men agree on, and Johnson has benefited from Biden’s backing for his G7 initiatives.

This month, finance ministers agreed to a landmark reform of global business taxes, to make sure tech giants such as Amazon.com pay more in the countries where they operate, and to set a minimum rate for business levies.

The two sides published a new shared vision for their co-operation. The joint statement included renewed commitments to peace in Northern Ireland, alongside promises to work to boost global trade. In a separate statement, the UK said the two sides agreed to work towards a free-trade agreement.

Cummings can’t touch Johnson, neither can his pricey wallpaper, nor the pandemic or even Brexit
Opinion
3 weeks ago