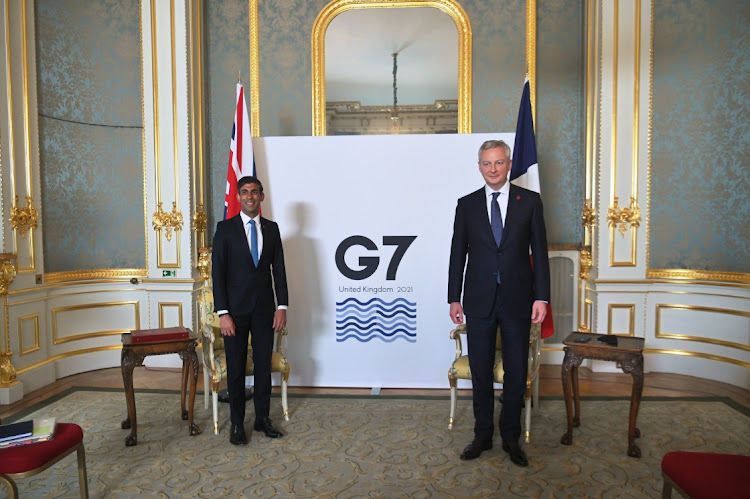 Paris/London/Washington — The Group of Seven (G7) advanced economies agreed the outline of a global deal on taxation that could hand governments greater rights to levy US tech giants and set a floor for corporate rates around the world.

The pact at a meeting of G7 finance ministers in London is missing key details needed to update century-old rules for the modern economy. But it smoothes transatlantic tensions that undermined efforts for years and paves the way for a broader accord by the Group of 20 (G20) as early as next month.

“That global minimum tax would end the race to the bottom in corporate taxation and ensure fairness for the middle class and working people in the US and around the world,” US treasury secretary Janet Yellen said in a statement after the talks in London on Saturday.

The UK treasury said on Twitter that the deal:

A joint statement did not mention any commitment to tax digital companies, focusing only on big profitable multinationals. That is a victory for the US, which opposed France’s bid for explicitly targeting tech giant such as Amazon.com and Facebook.

The overall aim is to stop multinational firms shifting profits between jurisdictions to lower their tax bills, make them pay more in countries where they operate, and adapt the system to cope with trade in intangibles like data and information.

Tech companies have long supported the efforts to replace a growing number of national levies on their revenues with clear rules to where they pay tax.

Yet the ministers of the UK and France claimed tech giants would be in the crosshairs of new rules. It is “a historic agreement on global tax reform that will require the largest multinational tech giants will pay their fair share of tax in the UK”, chancellor of the exchequer Rishi Sunak said.

France finance minister Bruno Le Maire said the deal was a triumph. “We’ve been fighting for four years in all European and international forums, here at the G7 and the G20 for a fair taxation of digital giants and for a minimum corporate tax,” Le Maire said, adding that the 15% rate is a starting point that could be pushed higher.

Italian finance minister Daniele Franco said he will aim to broaden the discussion when G20 finance ministers meet in July in Venice. Once the proposals is agreed, Italy will no longer need its digital tax.

The revamp of taxes delivered at the first in-person meeting of the G7 since the start of the pandemic could be a moneymaker for those governments that have run up debt dealing with the economic fallout of Covid-19.

A study published by the EU Tax Observatory projected that a 15% rate could generate the equivalent of $49.9bn a year for the US and €48bn for EU members.

Still undecided are the technical details on how exactly to share the spoils of taxing tech companies. The communique after the meeting said that countries in which big firms operate would get the right to tax “at least 20%” of profits exceeding a 10% margin. But the definition of which companies would be in scope was left at “the largest and most profitable multinational enterprises”.

Defining that list of firms has always proved tricky because of the US refusal to ring-fence tech companies in the new rule book. Yet Europeans, under political pressure from voters to make tech companies pay more, have always wanted to explicitly target digital in any new initiative.

During Donald Trump’s presidency, the transatlantic division on digital issues spiralled into a battle of unilateral measures and threats of trade sanctions, which, though suspended, are still in place.

The antipathy in recent years was greatest between Paris and Washington as France was the first country to bypass the slow-moving Organisation for Economic Co-operation and Development (OECD) process on how to tax profits, opting for a controversial levy on exclusively on the digital revenues of large firms operating.

The G7 said that countries would “provide for appropriate co-ordination” to remove such digital services taxes. Resolving the exact sequencing of that could prove tricky with countries unwilling to give up revenues from their unilateral measures before they have certainty over what they will gain from new global rules.

Some small countries that use low corporate taxes to lure investors have pushed back on the effort that the G7 aims to be consensual. Ireland finance minister Paschal Donohoe said any tax deal will need to meet the needs of “small and large countries, developed and developing.”

Yellen had set out to reach an agreement on a global corporate tax rate, but she still needs approval from Congress. President Joe Biden is also gathering support from legislators to raise the domestic corporate tax rate to 21%. An international deal for 15% could help him because it offers multinationals options.

The OECD, which is trying to manage the process through 139 countries, has said a final deal may not come until October, with delivery requiring nations to pass the plan through national legislatures. “There is important work left to do,” said OECD secretary-general Mathias Cormann. “But this decision adds important momentum to the coming discussions.”