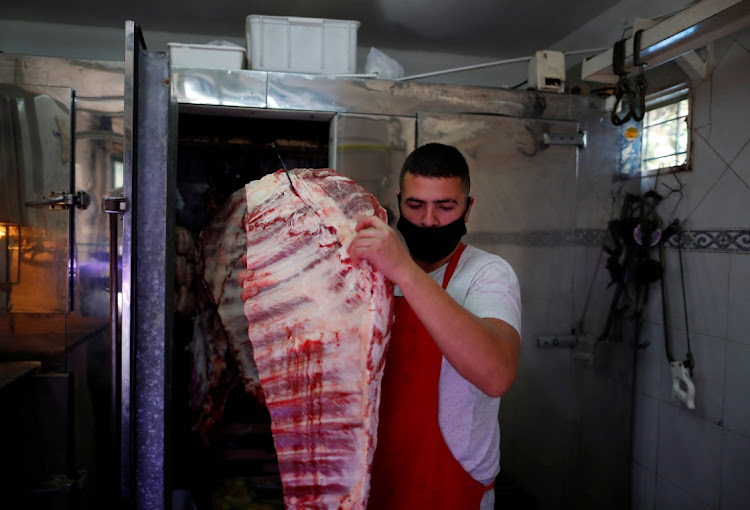 A butcher carries cow ribs out of his fridge at his shop in General Pacheco on the outskirts of Buenos Aires, Argentina. File photo: REUTERS/AGUSTIN MARCARIAN

Calgary — The world’s biggest meat supplier has become the latest casualty of a cybersecurity attack, posing a new threat to global food supply chains already rattled by the Covid-19 pandemic.

JBS SA shut its North American and Australian computer networks after an organised assault on Sunday on some of its servers, the company said by e-mail. JBS said the incident may delay certain transactions with customers and suppliers.

The attack sidelined two shifts and halted processing at one of Canada’s largest meatpacking plants, while in Australia the company cancelled all beef and lamb kills across the nation, according to industry website Beef Central. There were no immediate reports of plant disruptions in the US.

Hackers have the commodities complex in their crosshairs with the JBS attack coming just three weeks after the operator of the biggest US fuel pipeline was targeted. It has also happened as the global meat industry battles lingering Covid-19 absenteeism after recovering from mass outbreaks last year that saw plants shut and supplies disrupted.

The cyber assault affected a Canadian beef plant in Brooks, Alberta, 190km east of Calgary, on Monday, according to Scott Payne, spokesperson for United Food and Commercial Workers Canada Union Local 401. The facility accounts for more than a quarter of the nation’s capacity and processes about 4,200 head of cattle a day.

“There are no unionised workers there,” Payne said. “That means effectively the plant’s operations have shut for the day.” JBS did not respond to requests for comment on the Canadian closure.

A JBS packaging facility in Belleville, Ontario, where beef, pork and salmon are prepared for grocery stores, was operating normally, said Tim Deelstra, a spokesperson for UFCW Canada Local 175. Dakar Lanzino, an external UFCW representative, said he had no information on whether the attack had disrupted plants in the US on Monday, a public holiday.

Sao Paulo-based JBS owns facilities in 20 countries. Australia and New Zealand account for 4% of the company’s revenue, while the US represents 50% and Canada 3%, according to company fillings. The company also has operations in South America and Europe.

Backup servers were not affected, and the company is working to restore systems as soon as possible, according to a statement from JBS USA on Monday. The processor said it is not aware of any customer, supplier or employee data being compromised or misused.

A ransomware attack forced Colonial Pipeline to stop the flow of fuel for several days in May, causing severe petrol shortages.

In Australia, JBS is the largest meat and food processor with a portfolio of beef, lamb, pork, and value-added branded products, according to its website. It exports to more than 50 countries.

The shutdown is a big concern for meat exports if it drags on, said Matt Dalgleish, manager of commodity markets insights at Thomas Elder Markets, noting Australia ships overseas about 70%-75% of red meat products from sheep and cattle. There is a risk to worldwide supplies too.

“Given the size of JBS globally, if they were offline for any more than a week, then we’re going to see disruption to supply chains for sure,” Dalgleish said.