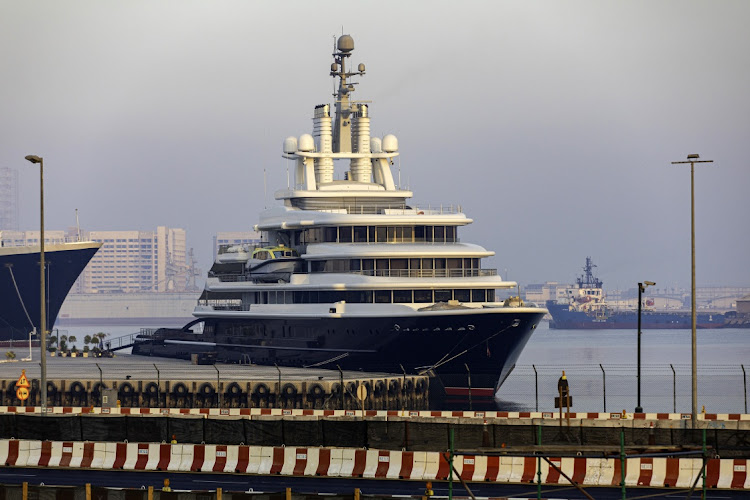 At the heart of the largest money fight that London’s divorce courts have ever known sits the Luna — a 115m, nine-deck luxury motor yacht holed up at a berth in a dusty marina in Dubai.

The Luna is the largest and most expensive single asset held by companies linked to oil and gas tycoon Farkhad Akhmedov, who bought the vessel from his fellow billionaire Roman Abramovich. It is also the prized target for Tatiana Akhmedova, Farkhad’s former wife of 21 years. Worth about £250m, seizing control of the yacht would go a long way towards satisfying a London court’s £450m divorce award in her favour.

But that, Tatiana is finding out, won’t be easy. With settlement talks with her former husband going nowhere, she has taken to fighting her battle in multiple jurisdictions, from Dubai and Liechtenstein to the Marshall Islands. What the money chase shows is that a ruling from a court in London may not be worth the paper it’s written on when pitted against someone who can move assets across the globe and is determined to frustrate the order.

Farkhad has said he will do everything to ensure that his former wife can’t get her hands on his fortune. The case sheds some light on how the world’s wealthy are able to protect assets through regulation arbitrage, playing one jurisdiction against another, creating opaque trusts and transferring ownership.

After the latest court ruling by a London judge in April — this time involving the couple’s 27-year-old son Temur, to whom Tatiana alleges his father transferred assets — Farkhad said the case “is beneath contempt and changes nothing.” The son was more conciliatory, with his spokesperson saying he has never sought to take sides between his two parents.

Tatiana and Farkhad met in 1989, marrying four years later and moving to London, where Tatiana has lived with their two children ever since. The marriage formally ended in late 2014.

Two years later, a London judge awarded Tatiana 41% of Farkhad’s assets. Farkhad called the 2016 divorce order illegitimate, and moved to Russia. “I will burn this moneys rather then will give her,” he said in a WhatsApp message to his son in March that year.

Azerbaijan-born Farkhad made much of his money from the sale of his stake in a Russian gas producer in November 2012 for $1.4bn. But the billionaire has refused to make any divorce payments, leaving Tatiana to pursue legal cases in at least nine different locations.

Ever since the first ruling, Farkhad has insisted that his wife is acting in bad faith and that she’s in thrall to her litigation funder Burford Capital. He has said the fund is the key decision-maker and is running “a vastly expensive wild goose chase around the world’s courts” on her behalf — something Burford has rejected. The firm declined to comment further on the case.

Earlier this year, the former couple discussed a settlement, with Farkhad promising to pay $100m to Tatiana and $15m to Burford, according to people familiar with the matter. The talks didn’t take hold, leaving Tatiana to pursue her hunt.

She has so far seized a single helicopter in the Isle of Man worth about £6m and is closing in on a private plane. Her chase has run into roadblocks, with assets frequently changing ownership and moved across jurisdictions.

While the trial was under way, much of the family’s wealth moved out of Farkhad’s name and into Liechtenstein trusts. Some $140 million of artwork, including paintings by Andy Warhol and Mark Rothko, was placed in a giant vault called the ‘Treasure House’ within the tiny city-state.

Still, the Luna, which — with its 50-member crew — has been languishing at its Dubai berth for more than two years, remains at the heart of their most intense fight. From time to time, Farkhad and Temur use the vessel, which is among only a handful of the world’s luxury “explorer yachts” with steel hulls designed for breaking through ice floes.

The title to the Luna has changed four times, sometimes overnight, according to Tatiana’s lawyers. Her investigators claim they also found a suspicious wire transfer in 2018, just as Tatiana’s side hit the Liechtenstein trust that owns the yacht with an emergency freeze. A payment of $65,000 was made to a Dubai marine company from Farkhad’s personal account. The money was for a large ocean-going tug and for a moment, according to Tatiana’s lawyers, it looked like the cornered billionaire was making a run for it. The payment was simply to tow the Luna into dry dock for repairs, Farkhad’s spokesperson said.

Tatiana has struggled to get other courts to recognise the London rulings. Dubai’s local courts rejected its determination of a matrimonial dispute, after Farkhad argued it was incompatible with shariah law. “It is effectively impossible” to enforce English judgments in Liechtenstein, a London judge bemoaned.

But for Tatiana, the most powerful court recognition of all may have come from a tiny island chain, thousands of miles away in the Pacific.

A ship is bound by the law of the flag it flies, and the Luna carries the flag of the Marshall Islands. Earlier this year, a local court sided with Tatiana in a judgment that would allow her to be declared the new owner of the yacht.

The court cited “a pattern of conduct” by Farkhad as it granted judgment in his former wife’s favour. The actions taken by the billionaire and the Liechtenstein trust were for the purpose of “hindering, delaying and avoiding satisfying English money judgments,” it said.

Farkhad’s spokesperson dismissed the ruling, saying “there is not a reliable maritime or legal opinion which believes that it will result in an enforced change of ownership.”

That leaves Dubai, where the Luna is stuck and slowly depreciating in value. One broker put her value as having fallen to $110m.

While Tatiana’s side has hired an asset-recovery firm backed by former military operatives, providing fodder for London’s tabloids to gleefully talk of special forces raids on the yacht, ultimately Tatiana needs to get assistance from the emirate’s local courts.

“We’re the owner, and Dubai is going to have to recognise that,” says James Power, a US lawyer for Tatiana, who argued the case in the Marshall Islands courts. “They’re going to have to twist themselves into a pretzel to ignore that.”

Power is one of many lawyers funded by Burford Capital, the litigation company that will take 30% of any assets recovered in exchange for financing the hunt, according to court documents. As of last year, it had put up £18m on the litigation.

The judge ordered Temur to pay his mother more than $100m for doing “all he could” to prevent her from obtaining her court-approved divorce payment.

After the ruling, a spokesperson for Temur said that “while he fundamentally disagrees with this judgment, he would consider it a price worth paying should it lead to a reasonable settlement between the parents he loves.”

But the judgment enraged Farkhad.

“Burford has embarked on a staggeringly expensive global tour of the world’s courts seeking to seize assets from me and from family trusts,” he said in a statement.

“People with money can always delay things but in the end it always catches up with them,” said Power.