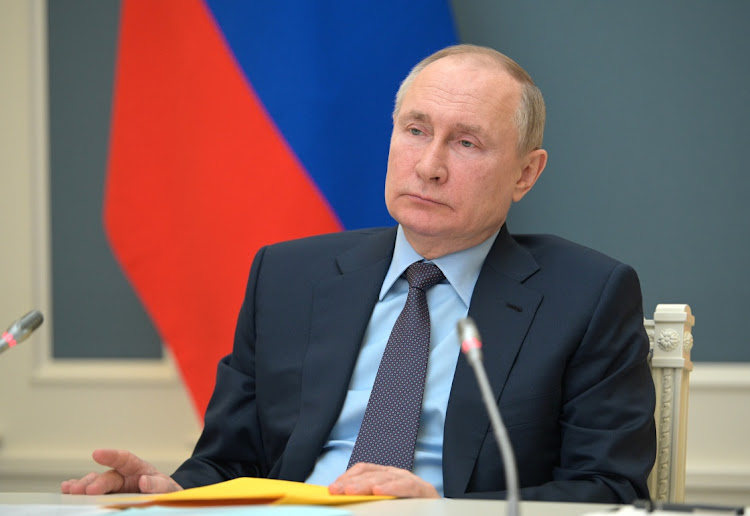 London/Washington — The Biden administration is poised to impose a raft of new sanctions on Russia, including long-feared restrictions on buying new sovereign debt, in retaliation for alleged misconduct, including the SolarWinds hack and efforts to disrupt the US election, according to people familiar with the matter.

Russian bonds fell and the rouble dropped the most since December on the news.

The sanctions, the first of which could be announced this week, reflect an attempt by the US to balance the desire to punish the Kremlin for past misdeeds but also to limit the further worsening of the relationship, especially as tensions grow over a Russian military build-up near Ukraine.

The latest moves come just two days after President Joe Biden warned President Vladimir Putin that the US would defend its interests but also offered the possibility of a summit meeting in the coming months, drawing a cautiously positive response from Moscow.

The Biden administration plans to bar US financial institutions from participating in the primary market for new debt issued by the Russian central bank, finance ministry and sovereign wealth fund, according to one of the people. The precise timing of the debt restrictions isn’t clear, the person said.

The new measures include sanctions on about a dozen individuals, including government and intelligence officials, and roughly 20 entities, according to one of the people, who asked not to be identified because the matter is sensitive. The US is also expected to expel as many as 10 Russian officials and diplomats from the country, two of the people said.

Restrictions blocking US investors from buying rouble-denominated Russian government debt have long been seen as the “nuclear option” in financial markets, where the bonds, known as OFZs, have been a popular investment. Foreigners now hold about a fifth of that debt, worth roughly $37bn.

Russia’s 10-year local bonds fell the most since March 2020 at the start of trading in Moscow, while the rouble, which had rallied on the news of the Biden-Putin phone call, fell 1.4%.

Spokespeople for the White House, the US national security council and treasury department had no immediate comment. The state department didn’t respond to a request for comment.

The Kremlin warned the US on Wednesday that it would retaliate for any new sanctions. Though they hit the market, debt restrictions aren’t expected to significantly hamper the Russian government’s ability to finance itself, since state banks can take up much of the slack, analysts said.

Limits on debt mark a serious escalation and are likely to abort the planned presidential summit in the immediate future, said Fyodor Lukyanov, head of the Council on Foreign and Defence Policy, which advises the Kremlin. “There is a desire to meet but the situation has severely deteriorated,” he said.

Putin may respond by ratcheting up tensions over Ukraine with continued massing of troops on the border, setting back hopes of an end to the crisis, according to the analyst. “When it will reach an extremely dangerous point, that’s when they will meet to avoid the worst-case scenario,” he said.

In a potentially conciliatory gesture, this week the US dropped plans to send two warships into the Black Sea after Russia warned the move would be “extremely provocative”.

The US has been threatening to impose additional restrictions on Russia for months to punish the Kremlin for a litany of transgressions in recent years.

A US intelligence community assessment has concluded with a high degree of confidence that Putin and the Russian government authorised and directed an effort to influence the 2020 election. Some of the planned measures are aimed at outlets controlled by Russian intelligence services and blamed for sowing disinformation during the 2020 campaign, according to one of the people. Others to be targeted include individuals and entities that operate outside Russia at the behest of Moscow.

The sanctions would follow a review ordered by Biden on his first full day in office into four key areas concerning Russia: interference in the 2020 election; reports of Russian bounties on US soldiers in Afghanistan; the SolarWinds cyberattack; and the poisoning of Russian opposition leader Alexei Navalny.

The administration announced sanctions against Russian officials over Navalny in March but has so far held off on action in the other three areas.

Russia has repeatedly rejected accusations that it meddles in elections, poisons its critics or offered to pay bounties for the killing of American troops. Foreign minister Sergei Lavrov said last week that Russia would retaliate for any new sanctions, which he dismissed as a “dumb” instrument.

Those facing the next round of sanctions include individuals and entities blamed by the US for enabling the Internet Research Agency, a Kremlin-linked troll farm that used a co-ordinated operation on social media in an effort to help Donald Trump’s presidential campaign in 2016.

Actions in response to the malicious SolarWinds cyber-activity will target about half a dozen entities linked to Russian security services, according to one of the people. Those measures are also expected to be announced as early as Thursday. The US is also poised to name the Russian foreign intelligence service as the perpetrator of the campaign, the person said.

The attack by hackers who compromised widely used software by Texas-based SolarWinds breached more than 100 US companies and nine government agencies before it was discovered by a cybersecurity firm.

Advocacy group the Assistance Association for Political Prisoners says 2,847 people are being held in detention
World
2 months ago

The sector is critical to Myanmar’s economy, which accounts for a third of its exports and employs 700,000 low-income workers
World
2 months ago
Next Article