Alleged Italian spy said to be broke with a big family 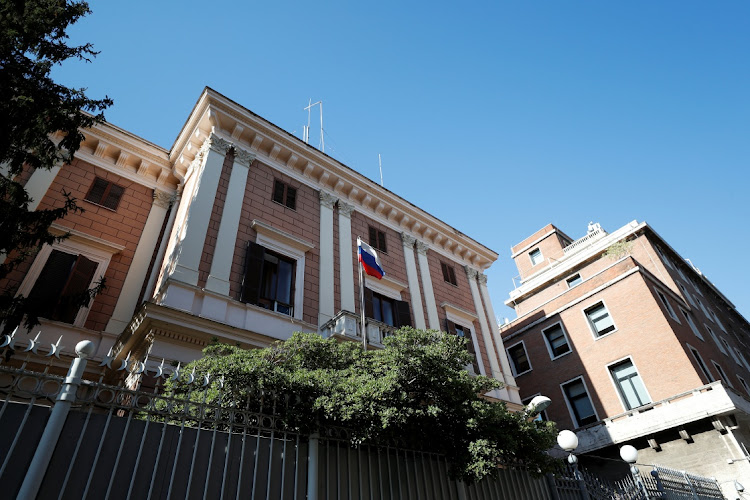 General view of the Russian Embassy after a Russian army official, who is accredited with the embassy, and an Italian navy captain were arrested on suspicion of spying, in Rome, Italy, March 31 2021. Picture REUTERS/GUGLIELMO MANGIAPANE

Rome — An Italian navy captain caught allegedly passing secret documents to a Russian military attaché in return for cash was financially hard-up and struggling to provide for his four children, his wife has told an Italian newspaper.

Walter Biot was arrested on Tuesday in a Rome car park moments after he was seen receiving €5,000 from the Russian official in return for information contained on a USB drive, a police source said.

Italy, which has traditionally enjoyed better relations with Moscow than many other Western states, immediately expelled two Russian diplomats in retaliation and denounced the alleged espionage as a “hostile act”.

The Russian foreign ministry was quoted as saying on Wednesday that it regretted the expulsions, but that they did not threaten bilateral relations.

Biot, who is being held in custody and faces a minimum 15 years in jail if found guilty of military espionage, has not released any statement since his arrest.

In the interview with Corriere della Sera daily his wife, Claudia Carbonara, said she did not know if he had a lawyer. She told the newspaper she knew nothing of what had happened, but also said that Biot had not handed over anything compromising, just “the minimum he could give”.

“He is not stupid or irresponsible. He was just desperate,” she was quoted as saying.

Carbonara, a psychotherapist, said their large family was in financial difficulty and could not make ends meet on his salary of €3,000 a month with expenses, including €1,200 a month on their mortgage.

Other newspapers reported that Carbonara had struggled to work as a result of coronavirus lockdowns over the past year.

Biot has the rank of a frigate captain and had had a desk job since 2010. He was working at the defence ministry department tasked with developing national security policy and managing part of relations with Italy’s allies, a ministry source said.

The Russian official had diplomatic immunity so could not be held, but was one of the men expelled by the Italian foreign ministry, a diplomatic source said.

Russia’s Nova news agency said that two Russians who worked at the military attaché’s office flew back from Rome to Moscow on Thursday, naming them as Dmitry Ostroukhov and Alexei Nemudrov.

Italy has relatively good ties with Moscow, and has been at the forefront of efforts to try to end international sanctions against Russia. Looking to show goodwill, Russia sent military doctors and medical equipment in 2020 to help Italy battle an initial outbreak of coronavirus.

Starting in hard-hit Lombardy, the algorithm, designed by scientists over the past year, reduces any element of political discretion
World
3 weeks ago
Next Article