The novel coronavirus mutates about once every two weeks — slower than influenza or HIV, but enough to require tweaks to vaccines 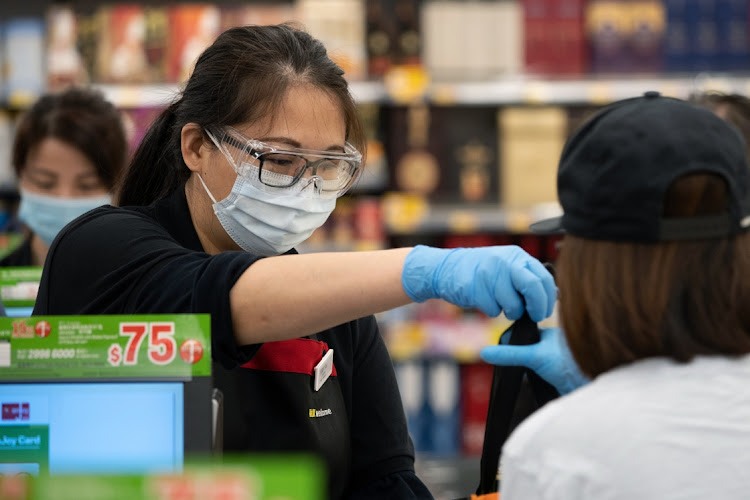 A cashier wears a protective mask and goggles at a shop in Hong Kong, China. File photo: ROY LIU/BLOOMBERG

Cambridge, England — Regular booster vaccines against the novel coronavirus will be needed because of mutations that make it more transmissible and better able to evade human immunity, the head of Britain’s effort to sequence the virus’s genomes told Reuters.

The novel coronavirus, which has killed 2.65-million people globally since it emerged in China in late 2019, mutates about once every two weeks, slower than influenza or HIV, but enough to require tweaks to vaccines.

Sharon Peacock, who heads Covid-19 Genomics UK (COG-UK) which has sequenced half of all the novel coronavirus genomes so far mapped globally, said international co-operation was needed in the “cat and mouse” battle with the virus

“We have to appreciate that we were always going to have to have booster doses; immunity to coronavirus doesn’t last forever,” Peacock said at the Wellcome Sanger Institute’s large campus outside Cambridge.

“We already are tweaking the vaccines to deal with what the virus is doing in terms of evolution — so there are variants arising that have a combination of increased transmissibility and an ability to partially evade our immune response,” she said.

Peacock said she was confident regular booster shots — such as for influenza — would be needed to deal with future variants but that the speed of vaccine innovation meant those shots could be developed at pace and rolled out to the population.

COG-UK was set up by Peacock, a professor at Cambridge, exactly a year ago with the help of the British’s government's chief scientific adviser, Patrick Vallance, as the virus spread across the globe to Britain.

It is now the world's biggest network of knowledge about the virus's genetics: At sites across Britain, it has sequenced 346,713 genomes of the virus out of a global effort of about 709,000 genomes.

On the intellectual front line at the Wellcome Sanger Institute, hundreds of scientists — many with PhDs, many working on a voluntary basis and some listening to heavy metal or electronic beats — work seven days a week to map and then search the virus's growing family tree for patterns of concern.

Wellcome Sanger Institute has sequenced over half of the UK total sequenced genomes of the virus after processing 19 million samples from PCR tests in a year. COG-UK is sequencing about 30,000 genomes per week — more than the UK used to do in a year.

An AstraZeneca document dated March 10 shows that the drug-maker expects to have delivered 30-million doses to the EU by the end of March, 10-million ...
World
7 months ago

However, there's been on confirmation from Tanzanian, Kenyan or Indian governments and the WHO has warned against speculation
World
7 months ago

A cashier wears a protective mask and goggles at a shop in Hong Kong, China. File photo: ROY LIU/BLOOMBERG
Next Article