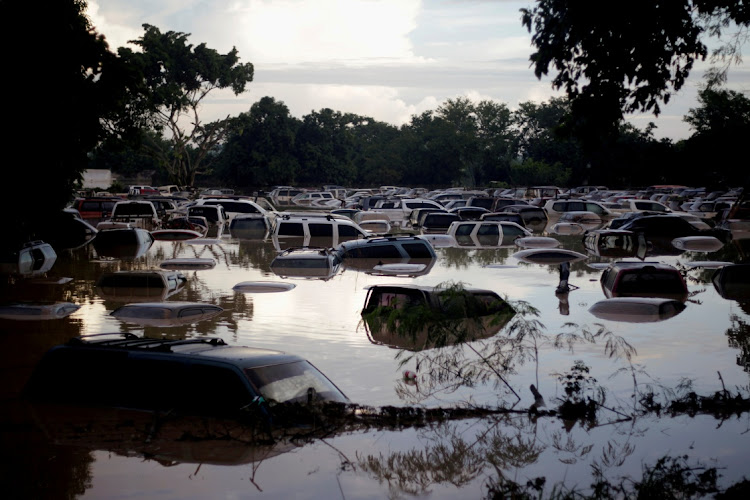 Vehicles are submerged at a plot flooded by the Chamelecon River due to heavy rain caused by Storm Iota, in La Lima, Honduras. File photo: REUTERS/JORGE CABRERA

Barcelona — More powerful storms are battering people and economies harder, with the poor suffering the worst losses, an annual climate risk index shows, as leaders were urged to ramp up their response to climate change effects at a global adaptation summit on Monday.

The index for 2019, from research group Germanwatch, shows that Mozambique and Zimbabwe were hardest-hit by extreme weather. Both were struck by Idai, the deadliest and costliest cyclone recorded in the southwest Indian Ocean.

Storms and their effects — strong winds, heavy rainfall, floods and landslides — were the major cause of extreme weather damage in 2019, Germanwatch said. Of the 10 most-affected countries, six were pounded by tropical cyclones.

The Caribbean island nation of the Bahamas was the third worst-hit, due to devastation from Hurricane Dorian.

The US was not included in the 2019 index due to data problems.

Recent research suggests the severity and the number of strong tropical cyclones will increase with every tenth of a degree in global average temperature rise, Germanwatch said.

This injustice must be corrected, and a clear plan must be presented to show how they intend to live up to their commitments with real money — and no reporting tricks

In 2020 — one of the three hottest years on record — the global average temperature was about 1.2°C above pre-industrial times, according to the World Meteorological Organisation.

“They urgently need financial and technical assistance,” he said, noting they had yet to receive the full $100bn a year in climate funding promised by wealthy countries.

Richer nations agreed to build up to providing that sum each year, starting in 2020, to help poorer countries adopt cleaner energy systems and adapt to the effects of planetary warming.

Of the nearly $80bn raised in 2018, the latest figures available, only about 20% was allocated for adaptation, despite repeated calls for that share to be raised to half.

The climate adaptation summit starting on Monday “must address these problems”, Eckstein added.

Research out last week from international aid agency Care suggests the actual amount of donor money going to adaptation could be even lower than reported.

Working with other organisations, Care assessed 112 projects in Ghana, Uganda, Ethiopia, the Philippines, Nepal and Vietnam, representing 13% of total global adaptation finance between 2013 and 2017.

It found 42% of the money was spent on activities that did little to help communities build resilience to climate change, including a “friendship bridge” and an expressway in Vietnam and a post-earthquake housing reconstruction project in Nepal.

Report author John Nordbo from Care Denmark said rich nations had not only failed to deliver enough adaptation finance, but had also tried to give the impression they are providing more than they do.

“This injustice must be corrected, and a clear plan must be presented to show how they intend to live up to their commitments with real money — and no reporting tricks,” he added in a statement.

Before Monday’s summit, the International Federation of Red Cross and Red Crescent Societies (IFRC) announced plans to at least double the size of a fund that it uses to support communities before climate disasters hit, to reduce losses.

IFRC secretary-general Jagan Chapagain said expanding the fund is part of a broader effort by the Red Cross to respond to an increasing caseload of emergencies caused by climate change.

In the past 30 years, Chapagain noted, the average number of climate and weather-related disasters per decade has increased nearly 35%. They accounted for 83% of all disasters in the past decade alone, killing 410,000 people and affecting 1.7-billion.

The IFRC’s new loss-prevention approach, now gaining ground among donors and aid agencies, is known as “forecast-based action” because it is triggered by weather predictions.

Under the approach, money is made available to people imminently at risk from a coming weather threat, to help them move their families, livestock and goods to safety or otherwise take measures to protect them, as well as recover afterwards.

The Red Cross used it six times in 2020 to protect at-risk communities in Bangladesh, Ecuador, Mongolia and Mozambique, through measures such as early evacuation or reinforcing homes.

“By doing this, we are definitely saving lives,” Chapagain said.

The Red Cross now aims to scale up forecast-based action in partnership with local governments, he added.

Chapagain urged leaders at the summit, hosted by the Netherlands, to acknowledge the need to take urgent steps to help communities cope with global warming affects, while ramping up efforts to cut planet-heating emissions at the same time.

“If we don’t adapt now, it is just going to be much, much worse,” he said.

LISTEN | The worst is over, but SA should remain cautious – SA Weather Service