While most expect the US will shift its approach in dealing with China, they also say a protracted rivalry is here to stay 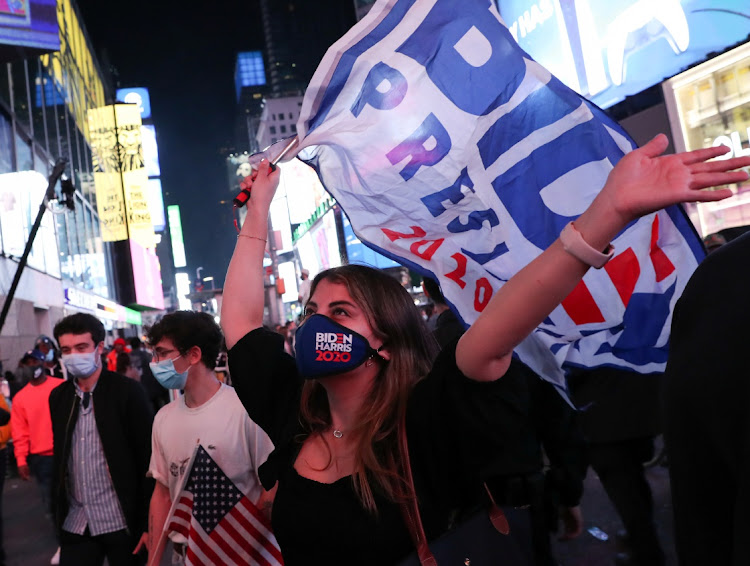 A woman reacts in Times Square after a speech by Democratic US presidential nominee Joe Biden after news media announced he has won the 2020 US presidential election in Manhattan, New York, US, on November 7, 2020. Picture: REUTERS/CAITLIN OCHS

Analysts are focused on what Joe Biden’s election victory will mean for China’s economy and markets after relations with the US plummeted under President Donald Trump.

While most expect the US will shift its approach in dealing with China, they also say a protracted rivalry between the world’s two biggest economies is here to stay.

“We expect a Biden administration to adopt a more predictable and multilateral economic and financial China strategy,” said Shaun Roache, Asia-Pacific chief economist at S&P Global Ratings. However, “the core economic issues at the heart of the tension, especially market access and industrial policies, are likely to remain intractable.”

Here’s a look at how analysts are reacting:

With frictions likely to remain over the medium to longer-term, China will continue pursuing its policy of greater economic self-reliance, Zhongtai Securities economists Xu Chi and Zhang Wenyu wrote in a WeChat post.

“We believe we shouldn’t make overly optimistic assumptions about mid-to-long term US-China relations after Biden takes office,” they wrote. “It is still necessary to accelerate the formation of a new development pattern with the domestic market as the mainstay and international and domestic markets mutually supporting one another, to hedge against possible external risks and challenges in the development process.”

That was echoed by Bo Zhuang of research firm TS Lombard, who said China will continue to play for time, especially on the technology front.

“The US and China will increasingly compete directly in multiple spheres ranging from technology to security,” he said. “The leadership in Beijing sees China as being involved in a long-term struggle with the US, which it has to pursue as the core of its claim to power, reducing dependence on the US in favour of the ‘China Model’.”

It’s likely that the incoming US president will look to a more multilateral approach to trade than Trump did, meaning there’s less scope for another volley of tariffs at least for the near term, said Chua Hak Bin, senior economist at Maybank Kim Eng Research in Singapore.

“A Biden administration is expected to pressure China via alliances and further liberalisation, rather than via sanctions, tariffs and currency manipulation charges,” he said. “The US-China trade war may cool down under Biden.”

Expectations for a somewhat less confrontational approach from Biden will offer support for the yuan, even as broader US-China tensions remain, said Khoon Goh, head of research at Australia & New Zealand Banking in Singapore. The offshore yuan is already Asia’s best performer this year, having gained about 6% against the dollar, on the back of the economy’s solid recovery and positive yield advantage over US assets.

“The offshore yuan has strengthened past 6.60 and has the potential to rally further, especially if we see continued dollar weakness,” he said. “Yuan may rise to 6.45-6.5 by the end of the year or early next year.”

While a Biden administration will continue to view China as a competitor rather than a rival, there will also be scope for co-operation between both countries, and US trade policy is unlikely to be as volatile as it was under Trump, according to William Ping, MD at Peaceful Investment.

“I’m planning to add exposure to telecoms shares and other firms related to 5G, anticipating more favourable conditions for key tech sectors,” he said. “At the very least, it means Huawei lives.”

Because the face-off between the US and China is going to be long-term, both sides need to exercise restraint, Evergrande Research Institute economists led by Ren Zeping wrote in a WeChat post.

“China’s best response is to promote reform and opening up with greater determination and greater efforts,” they wrote. That will mean an ongoing focus on new infrastructure, urbanisation and family planning policies to drive self sufficiency, they wrote.

Biden’s victory came after the Associated Press, CNN and NBC showed him winning Pennsylvania and gaining more than the 270 Electoral College votes ...
World
6 months ago

Positive sentiment as much about expectations that a Biden presidency would see a more stable global environment as about its direct effect on the SA ...
Business
6 months ago
Next Article