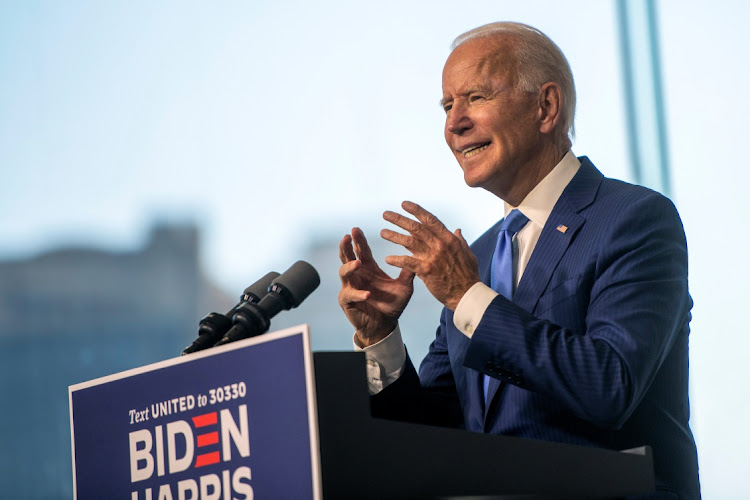 New York — Over the northern summer, environmental and clean energy groups put aside their reservations about Democratic presidential candidate Joe Biden and came together behind his $2.2-trillion dollar climate plan — the most ambitious ever put forth by a candidate for the US presidency, as they pointed out again and again.

Now, with just weeks to go until the election and Biden leading in the polls, one environmental group has crunched the numbers and is saying that the plan does not go far enough.

Carbon Switch, a Colorado-based group that promotes energy efficiency, tested some of the assumptions of the Biden plan by plugging them into a model created by the National Renewable Energy Laboratory, which estimates the amount of energy used by each American household. The report finds that while Biden’s plan clearly cuts more carbon and creates more jobs than any energy policy promoted by President Trump, Biden’s policies wouldn’t reduce greenhouse gas emissions enough for the US to meet existing climate targets.

One of the core mechanisms in Biden’s plan is a pledge to upgrade four-million buildings and weatherise two-million homes, which the campaign has said would create one-million jobs. In analysing this commitment, the report found that “Biden's weatherisation plan would generate $14bn in economic activity, create 106,000 jobs, and save two-million Americans $606 per year on their utility bill. However it wouldn’t achieve the carbon reductions necessary to meet the Paris targets,” the report said, referring to the 1.5°C ceiling for global warming outlined in the 2015 Paris Climate Agreement.

“Biden says his administration will set a target of reducing the carbon footprint of the US building stock 50% by 2035,” said Michael Thomas, founder and head of research for Carbon Switch. “But the commitments listed in his plan would only reduce emissions by a few percent each year — not enough to get there, or even close.”

Carbon Switch also evaluated the plan’s job creation claims against real gains from similar investments as part of the 2009 financial crisis stimulus package. Even scaling up for the much bigger expenditures proposed by Biden, researchers found that only about 110,000 jobs would be created.

The Green New Deal, by contrast, which proposes a more radical overhaul of the US economy and has become a flashpoint for Republicans and some moderate Democrats, “would create 10 million jobs, generate $1.2-trillion in economic activity, and reduce annual emissions by 263-million tonne,” according to Carbon Switch.

Quantum built on a previous analysis from the University of California, Berkeley’s Goldman School of Public Policy that compared two scenarios in 2035: one in which no new energy plan is put in place and the fossil-fuel commitments made by the Trump administration continue uninterrupted, and one in which Biden’s plan to move to 100% carbon-free electricity generation by 2035 is enacted. (The researchers actually used 90% clean energy by 2035, assuming the last 10% might be too difficult to achieve.)

Looking at the various forms of electrical generation, the UC Berkeley researchers concluded were likely to be put in place and modelling how they would affect additional environmental factors such as toxins in waterways, carbon emissions, and fine particulate matter in the air, Quantum concluded that Biden’s plan would result in 45.6% less spending on environmental issues compared to continuing Trump’s energy policies.

Quantum founder Daniel Howard said that “once we get to a clean energy supply and everything is decarbonised, then we will see even greater savings in health and the environment, something along the order of $1-trillion a year.”

Quantum also looked at job creation, but across the entire electricity generation sector, which includes manufacturing and construction. It concluded that the Biden plan would create 750,000 new jobs by 2035, over and above those that would be created if the country just stayed the course.

The duelling estimates underscore the variety of points of view currently united in the Biden coalition. All agree that electing Biden would be better for the environment than electing Trump. The differences will likely resurface, however, if Biden is elected.

Cutting emissions means sacrificing growth — or does it? In its new report, the IMF factors in the ‘co-benefits’ from cutting emissions — such as ...
World
11 months ago