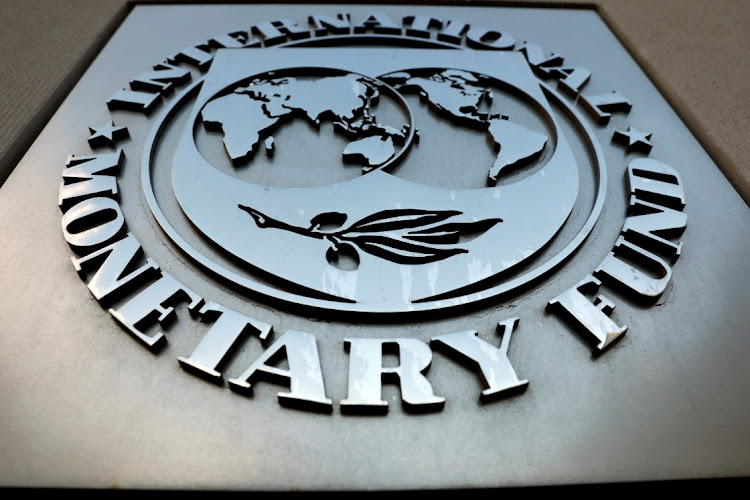 The International Monetary Fund logo is seen outside the headquarters building in Washington, US. File photo: REUTERS/Yuri Gripas

Washington —  The International Monetary Fund (IMF) warned on Tuesday that the world economy still faces an uneven recovery until the coronavirus is tamed even as it offered a less-dire view of 2020’s recession following huge stimulus from central banks and governments.

The fund now forecasts world GDP to shrink 4.4% in 2020, compared with the 5.2% drop seen in June, according to the latest World Economic Outlook released Tuesday. For 2021, the IMF sees growth of 5.2%, down from 5.4%. The report includes revisions to June’s forecasts and other historical data to reflect updated country weightings.

The contraction would still be the deepest since the Great Depression, with Covid-19 having killed more than one-million people and shut down large swaths of business. The report sets the tone for this week’s annual meetings of the IMF and World Bank — being held virtually, like April’s spring meetings, due to the pandemic — as global policy makers discuss how to avert a wave of debt defaults in poorer nations resulting from the virus’s effect.

“Recovery is not assured while the pandemic continues to spread,” chief economist Gita Gopinath wrote in the report. “Economies everywhere face difficult paths back to pre-pandemic activity levels.”

Extreme poverty is set to rise for the first time in more than two decades, with inequality poised to increase because the crisis has disproportionately affected women, the informally employed, and less-educated workers, the IMF said.

“The persistent output losses imply a major setback to living standards relative to what was expected before the pandemic,” and most economies will experience lasting damage to supply potential and scars from the deep recession, the report said.

The effect of the downturn has been cushioned by policy initiatives, including a European pandemic-recovery package, and large-scale central bank asset purchases, the fund said. Such unprecedented support helped ease financial conditions since June in advanced economies and in most emerging and developing economies, the fund said.

Policy makers must avoid prematurely withdrawing support in order to avoid setbacks, Gopinath said. The forecasts assume monetary policy is maintained at current settings through 2025, helping to alleviate debt service burdens for many countries. Governments globally have implemented $6-trillion in direct tax and spending measures, according to the IMF.

The fund’s forecast is based on the expectation that social distancing will continue into next year but gradually fade over time as vaccine coverage expands. It also is premised upon local transmission of the virus being brought to low levels everywhere by the end of 2022.

The upward revision in the IMF’s 2020 growth forecast reflects in particular better-than-projected second-quarter growth in the US and the euro area, a stronger-than-anticipated return to growth in China and signs of a more rapid recovery in the third quarter.

The US economy is projected to contract 4.3% this year, compared with a previous 8% estimate, the most-improved forecast among major economies. That doesn’t factor in potential additional fiscal stimulus, though, as President Donald Trump and Democrats continue to wrangle over measures. Growth is pegged at 3.1% in 2021, down from a prior forecast of 4.5%.

By contrast, the outlook for emerging markets, some with rising infections, has worsened slightly, with a 3.3% contraction anticipated for this year, compared with 3.1% previously.

China remains the lone major economy estimated to expand, with 1.9% projected growth this year and an 8.2% boom in 2021. India saw the steepest forecast reduction, with a 10.3% contraction seen for 2020, compared with just 4.5% previously, after a larger-than expected second-quarter contraction.

Overall, the fund sees global output by the end of 2021 being 0.6% higher than at the end of 2019, before the pandemic, but that’s driven almost entirely by China. Most other nations, including the US, will need to wait until at least 2022 to see full recovery to pre-virus levels.