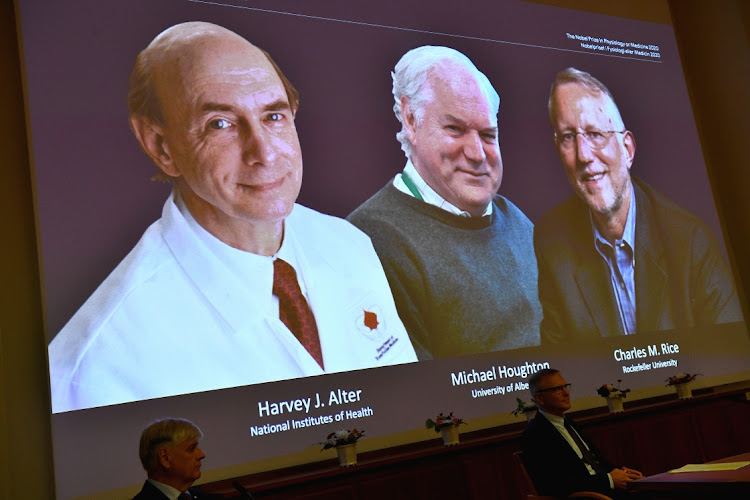 Harvey J. Alter, Michael Houghton and Charles M. Rice, are seen on a screen as the three laureates as they are announced as the winners of the 2020 Nobel Prize in Physiology or Medicine during a news conference at the Karolinska Institute in Stockholm, Sweden, on October 5 2020. Picture: TT News Agency via REUTERS/Claudio Brescian

Stockholm/Berlin, October 5 — Two Americans and a Briton won the 2020 Nobel prize for Medicine on Monday for identifying the Hepatitis C virus, in work spanning decades that has helped to limit the spread of the fatal disease and develop antiviral drugs to cure it.

The discoveries by scientists Harvey Alter, Charles Rice and Briton Michael Houghton meant there is now a chance of eradicating the Hepatitis C virus, which causes cirrhosis and liver cancer, the award-giving body said.

The three share the 10m Swedish crowns ($1.1m) award for discovering and proving that a blood-borne virus could cause Hepatitis C, which afflicts 78-million people every year and causes 400,000 deaths.

“Before the discovery of the Hepatitis C virus it was a bit like Russian roulette to get a blood transfusion,” Nobel Committee member Nils-Goran Larsson said of the award. “It has benefited millions of people that now can have a safe blood transfusion and safe blood products.”

Nominations for the 2020 award preceded the global spread of the new coronavirus pandemic, but the choice of winners recognises the importance of identifying a virus as the first step in winning the battle against a new disease, said Thomas Perlmann, secretary-general of the Nobel Assembly.

Perlmann said he had managed to reach Alter and Rice early in their day in the US. “They were really surprised, happy and speechless,” he told reporters.

It is the second Nobel prize for medicine to be awarded for hepatitis research after Baruch Blumberg won in 1976 for determining that one form of blood-borne hepatitis is caused by a virus that came to be known as Hepatitis B. Hepatitis A, which is easily treated, is transmitted by contaminated water or food

The shared prize recognises research dating back to the 1960s when Alter, who was working at the US National Institutes of Health (NIH) at the time, found that liver disease that are not caused by Hepatitis A or B could be spread by blood transfusions.

It was a team led by Houghton, then working for pharmaceuticals firm Chiron, who was able in the mid-1980s to create a clone of a new virus from fragments found in the blood of an infected chimpanzee. This virus, belonging to the Flavivirus family, was named Hepatitis C. Its identification made it possible to develop tests to screen blood bank supplies and greatly reduce the spread of the disease.

The final piece of the jigsaw puzzle came when Rice, then at Washington University in St Louis, was able to use genetic engineering to generate a version of the Hepatitis C virus and demonstrate that it alone could cause symptoms in a chimpanzee comparable to an infection in humans.

Alter is still affiliated to the NIH while Houghton is professor of virology at the University of Alberta. Rice headed the Centre for the Study of Hepatitis C at Rockefeller University until 2018 and remains active.

Nobel Committee member Gunilla Karlsson Hedestam told reporters that effective blood screening programmes have helped eliminate the virus in many parts of the world, while 95% of patients can now be cured with treatment.

While the Nobel awards will go ahead as planned this year, they have been overshadowed by the coronavirus pandemic. The Nobel Foundation has cancelled the traditional banquet, which forms the centrepiece of the celebrations in December, and will hand out the medals and diplomas in a televised event rather than live in Stockholm.

Medicine is the first of the Nobel prizes awarded each year. The prizes for achievements in science, peace and literature have been awarded since 1901 and were created in the will of dynamite inventor and businessperson Alfred Nobel.

The model challenges public stockpile figures, with North Korea’s arsenal expected to be at least two-thirds lower
World
8 months ago

Losing, and regaining, meaning in the era of coronavirus

What does Albert Camus’s philosophical classic, The Myth of Sisyphus, reveal about the status of our lives with Covid-19, writes Thaddeus Metz
Opinion
1 year ago
Next Article