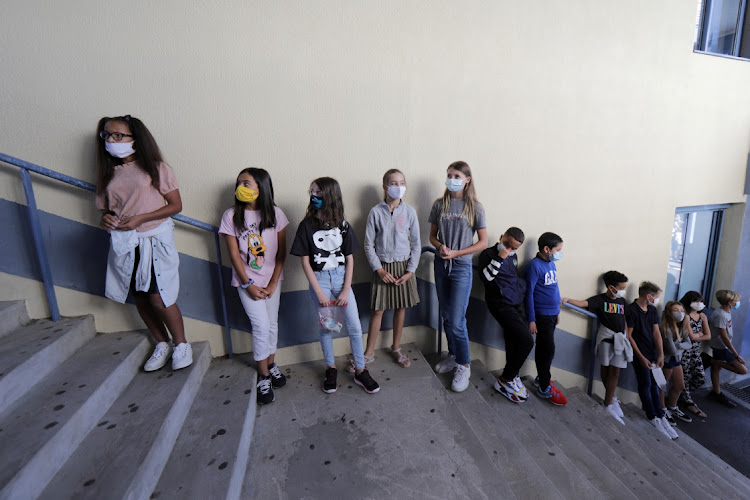 Secondary school students at the College Henri Matisse school during its reopening in Nice on September 1 2020. Picture: REUTERS/ERIC GAILLARD

London — Widespread reopening of schools after lockdowns and vacations is generally not linked to rising Covid-19 rates, a study of 191 countries has found, but lockdown closures will leave a 2020 “pandemic learning debt” of 300-billion missed school days.

The analysis, by the Zurich-based independent educational foundation Insights for Education (IFE), said 84% of those 300-billion days would be lost by children in poorer countries, and warned that 711 million pupils were still out of school.

“It’s been assumed that opening schools will drive infections, and that closing schools will reduce transmission, but the reality is much more complex,” said IFE’s founder and CEO Randa Grob-Zakhary.

The vast majority — 92% — of countries that are through their first wave of Covid-19 infections have started to reopen school systems, even as some are seeing a second surge.

The IFE found that 52 countries that sent students back to school in August and September — including France and Spain — saw infection rates rise during the vacation compared to when they were closed.

In Britain and Hungary, however, infection levels dropped after initial school closures, remained low during the holidays, and began rising after reopening.

Full analysis of these 52 countries found no firm correlation between school status and infections — pointing to a need to consider other factors, the IFE said.

“The key now is to learn from those countries that are reopening effectively against a backdrop of rising infections,” Grob-Zakhary said.

The report said 44 countries have kept schools closed. It found countries are developing strategies for schools during the pandemic — including some, such as Italy, France, which order temporary school closures on a case-by-case basis.

Other measures include policies on masks, class rotations and combining remote with in-school lessons.

“This first real global test highlights what school life looks like in a Covid-19 world,” said Grob-Zakhary. “Understanding how countries undergoing a massive second wave are dealing with this new reality in the classroom is essential to guide future reopening decisions and to help schools remain open.”

The European winter is coming, and labs are overwhelmed and people are not sticking to self-isolation or social-distancing
World
10 months ago
Next Article