The 102.39-carat diamond will be sold in a single-lot auction without a reserve price at Sotheby’s in Hong Kong on October 5 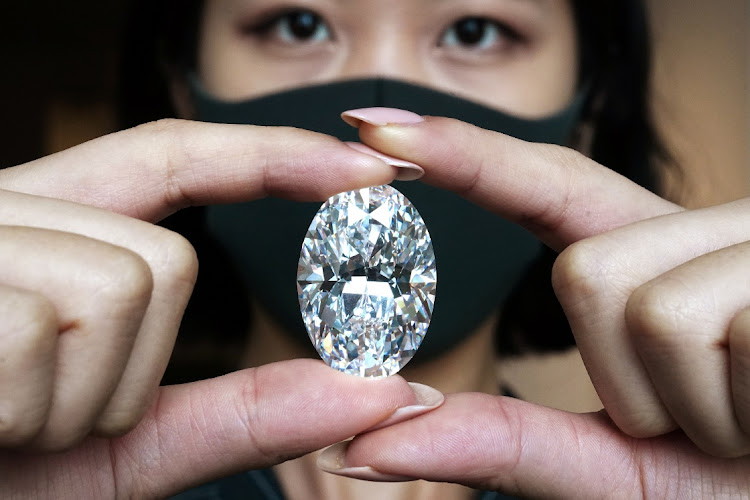 An employee of Sotheby's poses with a perfect 100+ carat diamond, the second largest oval diamond of its kind to ever appear at an auction, which will be auctioned by Sotheby's in Hong Kong on October 5, picture taken September 9 2020. Picture: REUTERS/CARLO ALLEGRI

Los Angeles — One of the world’s rarest diamonds, about the size of an egg or a large lollipop, is going up for auction next month and is expected to fetch $12m to $30m.

Sotheby’s said on Thursday that the 102.39-carat diamond, a flawless white sparkler, was the second-largest oval diamond of its kind to be offered at auction. The largest, a 118.28-carat diamond, set a record $30.8m price when it was sold in 2013.

Only seven such diamonds, known in the trade as D colour flawless, or internally flawless white diamonds, of more than 100 carats have previously been sold at auction.

“More and more people have come to understand that something billions of years old and of the size of a lollipop can store as much value as a Rembrandt self-portrait or a Basquiat,” Gary Schuler, worldwide chair of jewellery at Sotheby’s, said in a statement.

The diamond will be sold in a single-lot auction without a reserve price at Sotheby’s in Hong Kong on October 5.

“Diamonds of this calibre and size have sold anywhere between $11.9m to $33.7m,” said Quig Bruning, head of Sotheby’s New York jewellery department.

Sotheby’s said the gem was cut from a 271-carat rough that De Beers recovered at its Victor mine in Canadaat the Victor Mine in the Canadian province of Ontario in 2018 and cut and polished for more than a year.

Two of the most famous large diamonds — the Koh-i-Noor and The Cullinan 1 — belong to the British monarchy and form part of the British Crown Jewels.

The world record for any diamond or jewel sold at auction was set in 2017 when a 59.60-carat fancy vivid pink diamond was sold for $71.2m to the Hong Kong jewellery company Chow Tai Fook, Sotheby’s said.