‘You have done nothing wrong and I would urge you to start acting like it,’ Epstein writes to Maxwell in a January 2015 e-mail 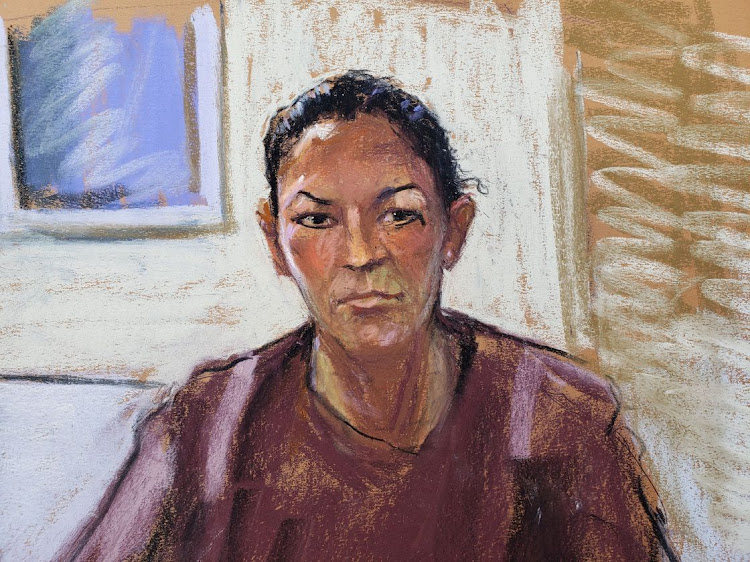 Ghislaine Maxwell appears via video link during her arraignment hearing where she was denied bail for her role aiding Jeffrey Epstein to recruit and eventually abuse of minor girls, in Manhattan Federal Court, in the Manhattan borough of New York City, New York, the US, in this courtroom sketch from July 14 2020. Picture: REUTERS/JANE ROSENBERG

New York — Jeffrey Epstein was offering advice to Ghislaine Maxwell as late as 2015, according to newly unsealed documents, despite her lawyer’s statement that the British socialite had “no contact” with the disgraced financier in a decade.

“You have done nothing wrong and I would urge you to start acting like it,” Epstein writes in a typo-ridden January 2015 e-mail to Maxwell, a former girlfriend who says she ran his many properties for years. “Go outside, head high, not as an escaping convict. Go to parties. Deal with it.”

The series of e-mails between “GMax” and “jeffrey E,” who used the e-mail address jeevacation@gmail.com, include what appears to be advice on what Maxwell should say in response to Virginia Giuffre, who alleged Epstein and Maxwell recruited her into a sex-trafficking ring when she was 16. A few weeks earlier, Maxwell had publicly lashed out at Giuffre’s claims, and Epstein seems to suggest Maxwell should distance herself from him. He’d reached a secret plea deal with Florida state prosecutors in 2008.

“I have never been a party in any criminal action pertaining to JE,” Epstein suggests to Maxwell in an e-mail included in a batch of unredacted court documents that were released late on Thursday. Also, “At the time of Jeffrey’s plea deal, I was involved in a very long-term committed relationship with another man and no longer working for Jeffrey. Whilst I remained on friendly terms with him up until his plea, I have had limited contact since.”

The exchange is part of several hundred pages made public from a 2015 defamation case that Giuffre brought against Maxwell, after Maxwell denounced Giuffre’s claims as “obvious lies.” Maxwell is currently awaiting trial in New York, charged earlier in July with sex trafficking of underaged girls with Epstein and perjury. She pleaded not guilty.

In an unsuccessful attempt to have Maxwell released on bail, her lawyers claimed in a court filing that “she’d had no contact with Epstein for more than a decade”.

US district judge Loretta Preska, who is presiding over the now-settled defamation lawsuit, ordered the documents to be unsealed. More documents are expected to be released Monday, including parts of Maxwell’s deposition. Those could make public embarrassing revelations about Maxwell’s sex life and her relationship with Epstein.

Federal prosecutors say Maxwell conspired with Epstein to lure girls as young as 14 to be sexually abused by the financier and that she sometimes participated in the assaults. The government also charges Maxwell lied during her April 2016 testimony when she denied knowing Epstein engaged in sex with underage girls or that she was present during such encounters.

Much of what appears in the documents unsealed late on Thursday in New York has previously been reported, including Giuffre’s claim that Epstein and Maxwell turned her into a “sex slave” and trafficked her to a long line of wealthy and powerful men.

Maxwell asked a federal appeals court on Thursday to block the unsealing of her testimony on Monday. The Second Circuit Court of Appeals in New York hasn’t ruled on her request.

Maxwell’s lawyers, Mark Cohen and Laura Menninger, didn’t immediately respond to e-mail messages sent after business hours seeking comment about Maxwell’s e-mail correspondence with Epstein or about the allegations in the unsealed documents.

Last August, a federal appeals court released at least 2,000 pages of evidence, including testimony from Giuffre, her mother and some of Epstein’s employees. A day later, Epstein was found dead in his Manhattan federal jail cell of an apparent suicide while awaiting trial.

Giuffre has recounted how she had a job at 16 handing out towels in a spa locker room at Donald Trump’s Mar-a-Lago resort in Florida before Maxwell lured her to work as a masseuse for Epstein, when he began sexually assaulting her. After that, Giuffre testified, Maxwell and Epstein began farming her out to powerful men.

Epstein pleaded guilty in 2008 to Florida state charges of soliciting prostitution from minors and then got unusually lenient terms for his imprisonment in Palm Beach County, where he was allowed out during the day to work in his office six days a week. He was arrested on new sex-trafficking charges in July 2019 in a case filed by federal prosecutors in New York.

According to one of the e-mails unsealed on Thursday, Epstein appears to have drafted a press statement for Maxwell: “Since JE was charged in 2007 for solicitation of a prostitute I have been the target of outright lies, innuendo, slander, defamation and salacious gossip and harassment; headlines, made up quotes I have never given, statements I have never made, trips with people to places I have never been, holidays with people I have never met,” Epstein wrote on Jan 21 2015.

Sex-offender Jeffrey Epstein's long-time friend said she has less than $1m in the bank, a claim the judge found ‘implausible’
World
10 months ago

Prosecutors from the public-corruption unit in the Manhattan US attorney’s office are on the case, suggesting a public official may be involved
World
11 months ago
Next Article