With momentum back, history supposedly shows the gains are here to stay, but past recessions were caused by fiscal and monetary problems — not a global pandemic 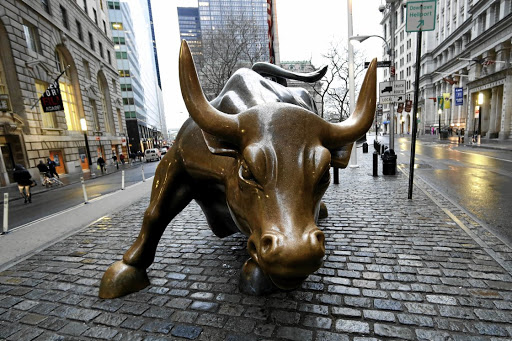 The Wall Street bull is seen in the financial district in New York. Picture: REUTERS

New York — Nothing has been normal on Wall Street for a long time. So expecting what “normally happens” to guide the here and now is an especially fraught exercise.

And yet that’s what a legion of strategists and analysts continue to do, as the pandemic and its economic pressures roll on. They’re reverting to their only playbook — the past. It’s a technique that showed its age in March, when the fastest plunge ever turned into the quickest 50-day advance in nine decades, a rally those with a historical bent said was doomed.

Now, with momentum back, history supposedly shows the gains are here to stay.

The rebound resembles the early stages of historic bull markets. High periods of volatility give way to large rallies. The market’s best quarters since 1950 were always followed by another good one. All these models have been floated by investors to justify the stock market’s 42% surge since March 23.

Of course, they could prove true. But with memories of March so fresh, a dose of scepticism is in order. Countless bearish calls informed by past experiences from Wall Street titans look way off today. Similar caveats logically apply to the current crop.

“It’s a fool’s game to try to predict the future of the equity market using the past,” said Chris Gaffney, president of world markets at TIAA Bank. “Most of those past recessions were caused by fiscal or monetary problems, not viral problems, not a global pandemic.”

That’s the crux of the issue with using past as precedent. Never before has a disease forced entire economies about the globe to shut down. And even in the midst of states and countries reopening, no-one can know for sure to what extent further Covid spread may hamper the recovery again. But when uncertainty reigns and data is sparse, traders cling to the only blueprints they know.

Keith Lerner, chief market strategist at SunTrust Private Wealth Management, analysed what happened following the benchmark’s best 10 quarters in the past 70 years and found that the S&P 500 rose in the next one every time, with an average gain of 8%. A year later, the index was higher nine out of 10 times. He acknowledges it’s one data point, but one that’s nevertheless useful in building a view on markets.

“Our approach is to use a weight-of-the-evidence approach as opposed to relying on any one indicator or looking at a study in a vacuum,” Lerner said by e-mail. “It’s just one study. But it falls on the positive side of the ledger, and that’s how I would suggest investors use it and as a guide.”  (Lerner made a prescient call at the end of March, saying a measure of selling pressure had become exhausted and an “internal” low for stocks was probably already in.)

The third quarter is young, but so far stocks have gained in every session since it began. The S&P 500 rose 1.6% Monday for a fifth successive day of gains, the longest winning streak this year. A study from Leuthold Group compared US equity gains since the March low with the early stages of previous bull markets — including those in 1982, 1987, 2003 and 2009 — and found similarities, suggesting “considerable” upside.

Jim Paulsen, chief investment strategist at the Minneapolis-based firm, knows nothing is foolproof. Back in April, he wrote a report titled, “Can Investors Rely On Any Indicators?”, questioning the usefulness of classic technical and fundamental signals in a scenario as unique as this. While that question remains, he still considers some to be helpful when viewed holistically.

“I love tools, I look at and use a ton of them. I rely on no-one of them. Part of it is I’ve come to that after 37 years of running myself over,” Paulsen said by phone. “At the end of the day, the beauty of those indicators is you’ve got all that floating in your head, and then you’ve got to let your judgment determine your decision. And that’s not infallible either.”

Past analysis that stacked the March declines next to those of the financial crisis in 2008 and suggested further losses were in store now look to have been misguided with the benefit of hindsight. Yousef Abbasi, a global market strategist at StoneX, notes that the background investors are dealing with changes quickly and often, meaning data points can easily turn useless.

“This isn’t the normal ball field,” said Abbasi. “We’re playing in a lopsided, crazy looking environment where you never know if things will be flipped on their head.”

That backdrop has resulted in extreme volatility. The Cboe Volatility Index, known as the VIX, jumped to a record in March and has since remained elevated. Past periods of extreme market fear have also been mined for signals on what the future holds.

According to DataTrek Research co-founders Jessica Rabe and Nicholas Colas, the S&P 500 swung 1% or more on 38 different days in the second quarter, roughly three times what is typical. In the past, whenever the benchmark registered more than 35 days of such large moves, the next two quarters on average each saw positive returns and lower volatility.

“Now that clients are starting to say to me, ‘Well this thing has more room to run,’ I’m starting to get a little bit uncomfortable,” Lebovitz said. “Because at the end of the day, you have sentiment flying at the centre of this and human behaviour is the one thing nobody’s good at predicting, regardless of how much data you have.

“We’ve never had a downturn like this, and we’ve never had a policy response like this. So trying to say, ‘This is what happened last time,’ and apply it to the future feels a little bit challenging.”

ISMAIL LAGARDIEN: Social media focuses on China wrongdoings while past misdeeds by US remain in dark

Until a vaccine is developed, many consumers will be wary of returning to shopping malls and so will discover the benefits of online shopping
Opinion
10 months ago
Next Article