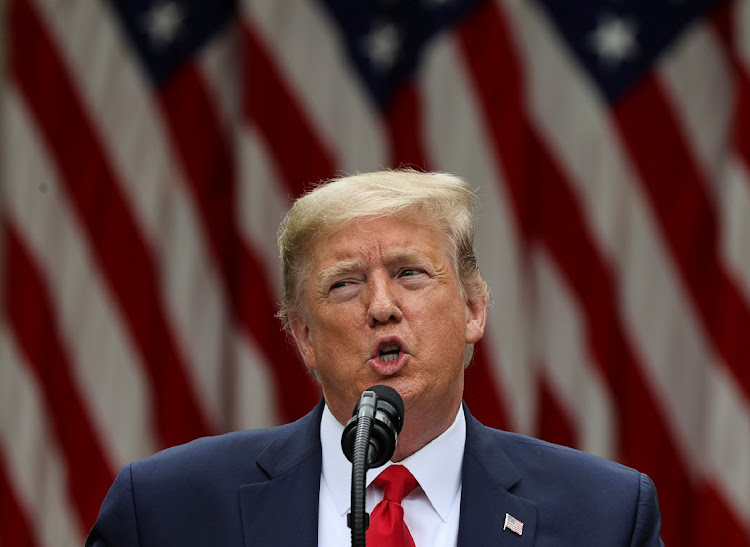 US President Donald Trump makes an announcement about US trade relations with China and Hong Kong in the Rose Garden of the White House in Washington on May 29 2020. REUTERS/JONATHAN ERNST

Washington — US President Donald Trump has little choice but to stick with his Phase 1 China trade deal despite his anger at Beijing over the coronavirus pandemic, new Hong Kong security rules, and dwindling hopes China can meet US goods purchase targets, people familiar with his administration’s deliberations say.

In recent weeks, suggestions that Trump may cancel the deal have emanated from the White House almost daily, and businesses, investors and China trade watchers are hanging on to every word and tweet.

But on Friday, when Trump said the US would start dismantling trade and travel privileges for Hong Kong, he did not mention the deal. Stock markets heaved a sigh of relief, with the S&P 500 reversing losses.

Talking tough on China and criticising the Obama administration’s more measured approach is a key part of Trump’s re-election strategy. Sticking with the pact may mean accepting that China is likely to fall short of purchase commitments for US agricultural goods, manufactured products, energy and services — goals many said were unrealistic even before the pandemic.

Cancelling the deal, though, would reignite the nearly two-year US-China trade war at a time US unemployment is at its worst since the 1930s Great Depression.

The next US step would likely be reviving previously planned but cancelled tariffs on about $165bn worth of Chinese consumer goods, including Apple cellphones and computers, toys and clothing — all ultimately paid by US companies and passed on to consumers. Beijing would retaliate with tariffs on US goods, fuelling more market turmoil and delaying recovery.

“He’s stuck with a lemon. He gets an empty agreement if he sticks with it, and he gets more actions that create an economic drag and more volatility if he abandons it,” said one person briefed on the administration’s trade deliberations.

US goods exports to China in the first quarter were down $4bn from the trade war-damaged levels a year earlier, according to US Census Bureau data.

The Peterson Institute of International Economics estimates that during the first quarter, China made only about 40% of the purchases it needed to stay on target for a first-year increase of $77bn over 2017 levels, implying an extremely steep climb in the second half.

Leaving the deal now would not buy a lasting political bounce for Trump in manufacturing-heavy swing states with five months to go before the presidential election, analysts say.

Trump blames China for failing to contain the coronavirus and has repeatedly said the deal, including its pledges to boost US exports to China by $200bn over two years, no longer means as much to him with US coronavirus deaths now exceeding 100,000 and job losses piling up.

Trump said on Friday that China was “absolutely smothering Hong Kong’s freedom”, but refrained from harsh sanctions that could put the trade deal in jeopardy, taking milder steps to revoke the territory’s separate travel and customs benefits from China.

Claire Reade, a former US trade negotiator, said Trump’s “peripheral steps” would not deter Beijing from proceeding with the security law, as it regards Hong Kong as a core national security issue.

“Probably the most significant thing from the trade perspective is that the Phase 1 trade deal is — for now anyway — unaffected,” said Reade, senior counsel with Arnold and Porter law firm in Washington.

White House economic adviser Larry Kudlow criticised Beijing last week, but on trade told CNBC: “It’s a complex relationship. The China Phase 1 trade deal does continue to go on for the moment and we may be making progress there.”

US trade representative Robert Lighthizer has recently cited “continuing progress” in the deal, after China welcomed US blueberries, barley, beef and dairy products. He has touted the deal’s dispute settlement mechanism, which provides for regular consultations on compliance with Beijing’s commitments on intellectual property protections, financial services, agriculture standards and purchases.

US-China flashpoints on Hong Kong, Taiwan and other issues did not derail negotiations that resulted in new concessions from China, said Jamieson Greer, who served as Lighthizer’s chief of staff until April.

“Some of these security and human rights challenges have certainly complicated the atmosphere, but the trade agreement can still provide a set of rules governing important aspects of the trade relationship,” said Greer, now an international trade partner at King & Spalding law firm.

Another person familiar with US trade deal thinking said the agency “needs to make Phase 1 look good. They want to show that progress is being made. The president looks at the China relationship much more broadly.”