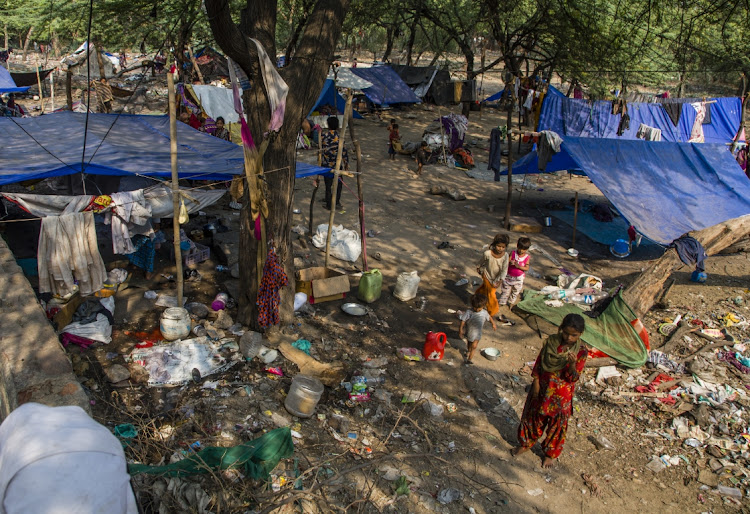 Children gather in a slum as India remains under an unprecedented extended lockdown over the coronavirus on April 29 2020 in New Delhi, India. Picture: GETTY IMAGES/YAWAR NAZIR

Bangkok — Containing coronavirus hot-spots in sprawling city slums has been made harder by a dearth of reliable data, urban experts said on Wednesday, calling for more extensive mapping and surveys to help deal with the global health pandemic.

Some of the hardest hit are people living in densely crowded slums and informal settlements with little or no running water, and inadequate sewerage systems.

City authorities have scarce data on these settlements, making it harder to track the spread of the disease, identify those at risk, and focus relief efforts, said Megha Datta, a director at Geospatial Media and Communications, a technology firm in India.

“You cannot monitor what you haven’t measured. Access to precise locations is imperative for effective disaster response and risk reduction,” she said. “But navigation tools don’t apply in slums because they have not been mapped. The complex and diverse morphology of slums also makes data extraction through standard methods difficult.”

About a third of the world’s urban population lives in informal settlements, according to the UN. These settlements may account for 30%-60% of housing in cities, yet they are generally undercounted.

Identifying and monitoring settlements with traditional methods, such as door-to-door surveys, is costly and time consuming. As technology gets cheaper, authorities from Rio de Janeiro to Mumbai are using satellite images and drones instead.

A World Bank mapping tool using artificial intelligence (AI), satellite and 3D images is helping cities identify areas that face the highest risk of spreading the coronavirus — such as communal taps and toilets, or where social-distancing is impractical.

But maintaining accurate data is challenging because irregular settlements change quite rapidly, said Nikhil Kaza, an associate professor of city and regional planning at the University of North Carolina.

“Some settlements are temporary, others are characterised by precarious tenure. So figuring out population estimates and health statistics for these transient neighbourhoods is hard,” Kaza told the Thomson Reuters Foundation.

“There is little capacity either in non-profit or governmental organisations to comprehensively collect, update and share data in a timely fashion,” said Kaza, who has studied slums in the southern Indian city of Bengaluru.

That study, which used satellite images and machine-learning, recorded about 2,000 informal settlements compared with fewer than 600 logged in official records.

Analysing such data can help identify stress on civic resources and public utilities, allowing authorities to plan and prioritise at a “hyper-local level”, he said.

Slum residents must also be encouraged to identify themselves and their needs to authorities, said Gautam Bhan, a researcher at the Indian Institute of Human Settlements.

“Slums are not invisible, but people who live in them are afraid to make themselves known because of the risk of eviction,” he said. “If we take away the threat of eviction, they will be quite happy to give us the data we need.”

Prices of ventilator parts are skyrocketing in a country of 1.3-billion, but which has just 50,000 of the life-saving machines
World
11 months ago

Non-bank lenders, the health of which India’s big banks doubt, are short of working capital as debt collections dry up
World
11 months ago

Migrant workers in India are hungry, helpless and ignored

As Covid-19 has shut the country down, its millions of migrant workers aren’t even eligible for a handout to buy much-needed food
World
11 months ago
Next Article

India’s migrant workers are walking home, hungry and scared of the police

India’s migrant workers are walking home, hungry and scared of the police