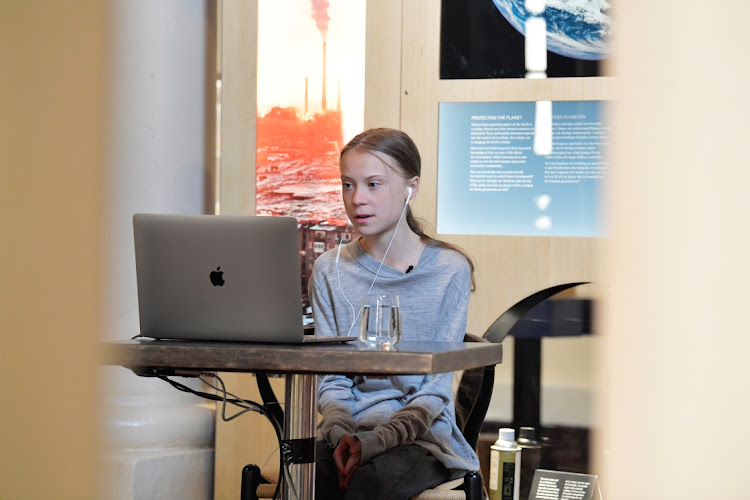 Greta Thunberg participates in a video conversation with Johan Rockstrom, who joins from Germany, about the coronavirus disease (COVID-19) and the environment at the Nobel Museum in Stockholm, Sweden on April 22, 2020. Picture: JESSICA BOW / TT NEWS AGENCY / REUTERS

With 2020, however, came the novel coronavirus and the sweeping quarantine orders that forced activists back into their homes. Some worried the movements would fall apart. They haven’t, but that doesn’t mean it’s been a simple task to keep them going.

As the celebrations of the 50th anniversary of Earth Day were coming to a close this week, Bloomberg Green asked young climate activists from around the world about their changed realities: What kind of difficulties have you faced? What do you think will happen after the pandemic is brought under control? Will you be able to keep going?

The simplest and most obvious way to conduct any large gathering in the age of the virus is to move it online. UK climate activist Anna Taylor, 19, did much of her organising on the internet anyway and keeps up with her fellow activists that way.

“Although we aren’t holding any in-person protests at the moment, we are still staying in touch and thinking about how we want to ensure that the country does not return to business as usual,” Taylor says.

Movements grow by bringing in new people, which they often get through exposure in the media. But after growing to a certain size, movements also need to keep those people fired up. That hasn’t been a problem so far for Canadian activist Emma-Jane Burian, 18, who says that the most recent rally she conducted over the videoconferencing platform Zoom involved more than 900 people.

With many people stuck at home for the foreseeable future, activists are hoping they’ll take some time to reflect on the state of humanity. “People have enough time to absorb information and in the pandemic they have something to relate to in the potential climate calamities that may befall humanity,” says Cameroonian activist Nche Tala, 25.

The biggest climate protests of last year took place in developed countries, where public concern about climate change was on the rise. Those in developing countries have to struggle with double the challenge: lower awareness of the effects of climate change and governments that are less open to protests.

The pandemic has added a third. While in-person protests are also on hold in the landlocked country of Eswatini (formerly Swaziland), activist Rodney Carval, 30, has struggled to keep going online. The “majority of our stakeholders do not have access to affordable and reliable internet,” he says.

Only 60% of the people in the 47 least developed countries — a group that includes Eswatini and comprises a total population of more than 800-million — are covered by a mobile network that can provide access to 3G internet or higher bandwidth, according to a 2018 UN report. These countries are also some of the most vulnerable to harmful environmental shifts.

“Many companies are using the virus to roll back environment protection laws,” says German activist Raina Ivanova, 16. In Eswatini, Carval says the same thing: with the economy suffering, so will climate action in the long term.

The pandemic has caught the world ill-prepared. The “Covid-19 outbreak is a tiny crack in the huge wall between this greedy world and a world prepared for climate catastrophe,” says SA activist Ruby Sampson, 18.

Panamanian activist Karel Miranda Mendoza, 27, says that all her family members have lost jobs, and their savings are running out. “This pandemic has taught us a lot, especially that we still have a long way to go to learn how to face a crisis,” she says.

But that’s also something climate protesters can use. After the pandemic, young people will apply “more pressure on leaders,” says Fijian activist Komal Narayan, 27. Countries that spent small sums on preparing for testing, tracing, and isolating cases of an epidemic have succeeded at controlling the spread of the disease and thus avoiding the economic damage that comes with severe lockdowns. Similarly, the cost of reducing emissions now is much lower than the cost of adapting to the devastations that climate change will unleash.

When the pandemic comes under control, countries will have to focus on economic recovery. If they choose a path that doesn’t aid the lowering of emissions, we’ll face another crisis soon enough. That’s why, says 18-year-old UK activist Laura Lock, “climate activism will persist. Because unless significant changes are made, we are still on a very destructive path.”