Could ‘Ghosn Guy’ be the title of a future Carlos Ghosn TV tale? 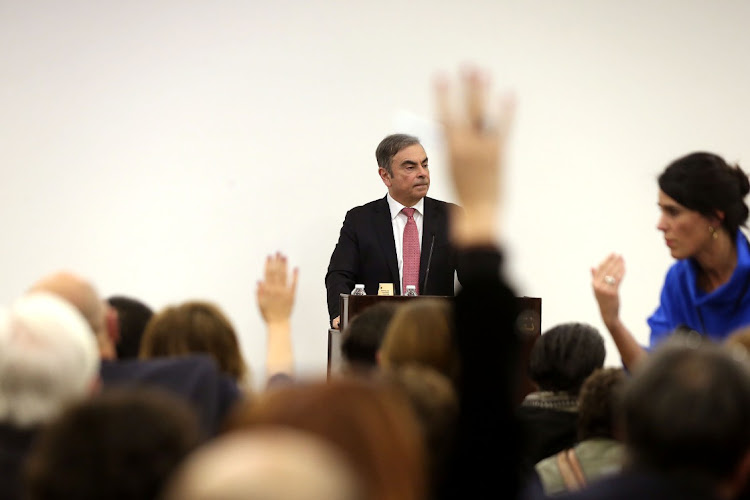 Carlos Ghosn takes questions from the media at the Lebanese Press Syndicate in Beirut, Lebanon, in this photo taken on January 8 2020. Picture: BLOOMBERG/HASAN SHAABAN

Los Angeles/Paris — Hollywood producers eager to dramatise the life of Carlos Ghosn, the former Nissan chair who staged a cinematic escape from Japan in December, are likely to get a simple response: call my agent.

Not just any agent. Ghosn is working with Michael Ovitz, the founder of Creative Artists Agency and former president of Walt Disney, to explore film and TV projects. A spokesperson for Ghosn said Ovitz would assist with projects and evaluating proposals he has received, cautioning that any discussions are still preliminary.

A deal with a studio could be a significant financial boon to Ghosn, who forfeited $14m in bail money when he fled Japan at the end of December, a caper that one security expert estimated could have cost him another $15m.

Ghosn’s story — which involves allegations of a high-level corporate coup and government collusion, followed by a dramatic extraction masterminded by a former Green Beret — has the makings of a compelling film or miniseries at a time when companies from Netflix to Amazon are hungry for new content.

Few people in Hollywood are more familiar with such negotiations than Ovitz, who has been one of the entertainment industry’s most prominent dealmakers since the 1980s. At CAA he pioneered the practice of “packaging” film projects, putting together stars, screenwriters, and directors and shopping them to studios as a team.

In 1995 Ovitz crossed to the other side, joining Disney as the second-in-command to then-chair Michael Eisner — a relationship that soon turned sour, leading Ovitz to depart the company after a little more than a year. He received $140m in severance payments, prompting a group of investors to unsuccessfully sue Disney’s board, claiming it had wasted money hiring him.

It’s probably safe to say that Ovitz, who over the years worked with A-listers including Steven Spielberg and Meryl Streep, has never had a client with Ghosn’s background.

The Brazilian-French-Lebanese auto executive, who spent much of late 2018 and early 2019 in solitary confinement in Tokyo, was facing four criminal charges in Japan, which together could have put him in prison for more than a decade. Two related to claims that he understated his compensation in official filings, while two more indictments, for “breach of trust,” alleged that he misused Nissan’s resources for his own benefit.

Ghosn was a household name in Japan even before his arrest, after turning Nissan around almost two decades ago. He became something of a corporate celebrity in the country, spawning numerous business books even a manga comic about his management style and time at the carmaker.

The vehicle industry executive, who made his way to Lebanon via a private jet, has denied wrongdoing, arguing the charges were part of a conspiracy by Nissan executives and Japanese government officials to halt his plans to integrate the company more closely with its top shareholder, Renault.

Japan’s second-biggest carmaker is set to shed at least 4,300 white-collar jobs, on top of a turnaround plan unveiled in July 2019
Companies
1 year ago

Does Nissan want Renault to reduce its stake to pursue electrification?

Both companies are facing declining sales and shrinking profits, with Nissan conserving cash as it embarks on 12,500 job cuts globally
Companies
1 year ago