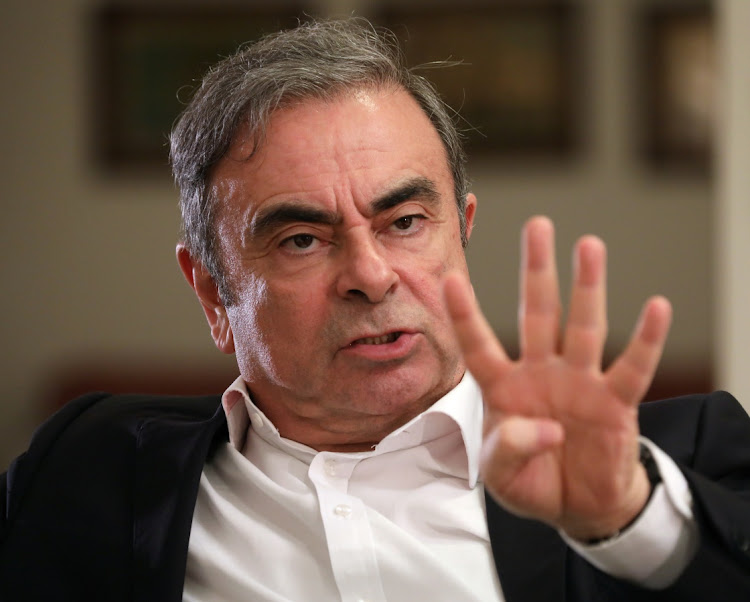 Carlos Ghosn talks during an interview with Reuters in Beirut, Lebanon, on January 14 2020. Picture: REUTERS/MOHAMED AZAKIR

Tokyo — Carlos Ghosn’s lawyer, one of the most respected criminal-defence attorneys in Japan, has formally resigned after his client fled the country at the end of December to escape trial.

Junichiro Hironaka, whose nickname is “The Razor” and who led the legal team representing the former chair and CEO of Nissan, notified the Tokyo District Court on Thursday that he is no longer representing Ghosn, his office said. Hironaka had already signalled his intention to resign last week.

Arrested in November 2018, Ghosn and former Nissan executive Greg Kelly — who both deny wrongdoing — were set to stand trial this year. That’s now looking unlikely without the main defendant, thrusting the conflict into the public arena and possibly the Lebanese courts. With an Interpol red notice and revocation of his bail, Ghosn is unlikely to ever set foot in Japan again.

All the lawyers in Hironaka’s practice resigned, as did Takashi Takano, another well-known attorney who worked with Hironaka and helped arrange bail for Ghosn. Ghosn hired them in February after firing his first defence team. Ghosn was represented in the US by Paul, Weiss, Rifkind, Wharton & Garrison.

The court decided on Thursday to try Kelly separately in Ghosn’s absence, Kyodo News reported. That effectively leaves the American at the centre of the criminal case and a proxy for Ghosn’s innocence or guilt in the first set of charges against him. The two were arrested on the same day; Kelly remains in Japan to face charges that allege he helped understate Ghosn’s compensation by tens of millions of dollars.

It wasn’t clear whether Nissan, which has also been charged for being involved in underreporting Ghosn’s income, will be prosecuted. Japanese prosecutors have continued to push the case domestically, issuing an arrest warrant for Ghosn’s wife, Carole, earlier this month.

Ghosn, arrested in November 2018, had been free on bail as he awaited a trial that was scheduled to start this year, but made a dramatic escape last month and fled to Lebanon. He has denied all the charges, saying they were part of a conspiracy to prevent further integration between Nissan and Renault.

Since Ghosn’s escape, his legal team in Japan came under scrutiny and criticism for the events leading to his departure. Hironaka, speaking just a few hours after Ghosn announced he was in Lebanon on December 31, said his office held all of Ghosn’s passports. He later confirmed that one was returned to Ghosn’s person last year in a locked case to which the legal team held the key.

Hironaka is best known for successfully defending Atsuko Muraki, a former senior bureaucrat, charged in 2009 with falsely certifying an organisation as representing disabled people so it could use cheaper postage rates. Takano, meanwhile, had represented a member of the Aum Shinrikyo cult behind the 1995 sarin gas attack in Tokyo.

The exiting team of lawyers was brought on to represent Ghosn in February 2019, after he fired his first attorney, Motonari Otsuru, a former prosecutor. The new legal team was able to secure bail for Ghosn after offering seemingly strict conditions such as camera monitoring and restricted internet use.

After Ghosn’s escape, some in the Japanese legal community have expressed sympathy for the defence team.

“His legal defence team has worked for years to gain the trust of the courts and that trust was also a factor in Ghosn getting bail,” said Nobuko Otsuki, a defence lawyer in Tokyo not connected with the case. “It must be a disgrace that this happened and I sympathise with them.”

Financing a fugitive is a costly affair, with the former head of Nissan’s escape costing about $30m, not to mention loss of income...
World
1 year ago
Next Article

Carlos Ghosn dishes some dirt at news conference in Lebanon

Carlos Ghosn dishes some dirt at news conference in Lebanon