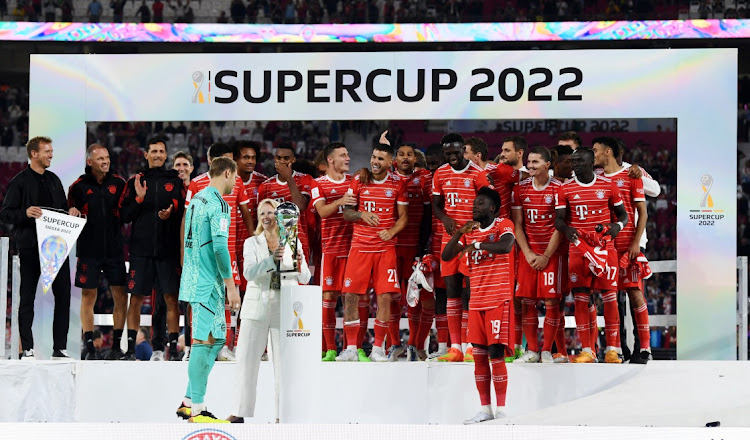 Berlin — Bayern Munich have dominated the Bundesliga for a decade and when the champions open their new season against Eintracht Frankfurt on Friday few will be betting against them winning a record-extending 11th consecutive league crown.

They have already won their first piece of silverware, beating RB Leipzig 5-3 on Saturday in the German Super Cup, and will go into the opener against Europa League champions Eintracht with their confidence high.

“I was in Leipzig and saw Bayern’s performance. One has to say that their attack was impressive,” said Hans-Joachim Watzke, CEO of Borussia Dortmund.

“They have an unusually good team, invested immense amounts of money and so they are the top favourites. Everyone apart from Bayern fans want to see Bayern not win the title,” Watzke told ARD television.

Runners-up last season, Dortmund’s own title hopes have suffered a major setback after Sebastien Haller, their replacement for elite striker Erling Haaland, was ruled out for months.

Haller joined in July but two weeks later the Ivory Coast international was sidelined following the discovery of a testicular malignant tumour that required surgery and now will need chemotherapy.

The Ruhr valley club, who also signed talented Germany forward Karim Adeyemi, will be looking for a replacement for Haller but that will not happen before their season-opener on Saturday against fellow Champions League club Bayer Leverkusen.

RB Leipzig coach Domenico Tedesco hopes his players will kick off the season against VfB Stuttgart on Sunday in the same manner they finished the second half of the last campaign.

Tedesco took over with Leipzig in the lower part of the table and led them to a fourth-place finish, as well as steering them to the German Cup, the club’s first major trophy.

Leipzig have also managed to hold on to Bundesliga Player of the Season Christopher Nkunku, despite several top European clubs interested in signing the France midfielder.

Leipzig have moved to tighten up at the back with the addition of Germany international David Raum.

“I can play in the Champions League here. You can win titles with this club as the German Cup showed last season,” Raum said.

“RB Leipzig is a big club with enormous prospects and a big future.”