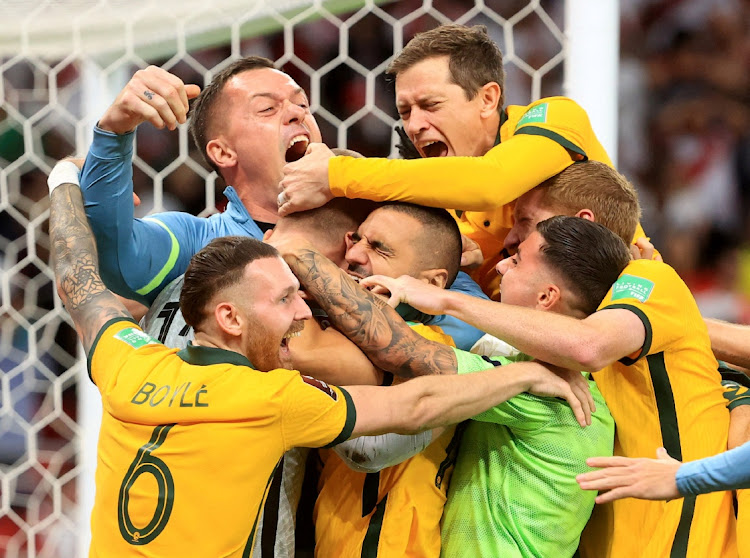 Substitute goalkeeper Andrew Redmayne’s dancing antics helped Australia claim a shootout win over Peru in an intercontinental playoff on Monday, but he said he was no hero and was only playing his part as they claimed a fifth straight World Cup appearance.

The 33-year-old journeyman was brought on for his third cap with three minutes to play at the end of extra time and stopped the last kick as the Socceroos won 5-4 on penalties after the match ended goalless.

“He’s a very good penalty saver and I did something that could affect them mentally,” coach Graham Arnold explained at the postmatch news conference.

“They were probably asking themselves the question, ‘Why is this guy being brought on? He has to be good’.

“Maybe that was the reason they hit the post. It’s a 1% mental effort to trouble the Peru penalty takers. It was a risk but it worked out.”

Redmayne’s antics were certainly a distraction. He danced along the line, waving his arms furiously, wiggling his hips and moving from side to side at the Ahmad bin Ali Stadium in Qatar.

“If I could gain one or two percent by doing something stupid and making a fool of myself, then I was going to do it,” he told reporters.

“I only played a tiny part, I don’t think I’m a hero or anything. The boys put in a hell of a shift to run out 120 minutes against a really good opposition.”

Redmayne’s celebration after the decisive kick also caught the eye, the bearded goalkeeper running to the side of the goal and standing stock-still with eyes wide and fists clenched before his teammates mobbed him.

That, he said, was the result of instructions from the referee. “I think he was a bit bemused about my antics, he threatened a yellow card a couple of times for trying to provoke players. I said I wasn’t doing that,” Redmayne added.

“[He] said to me before the last two penalties: ‘If you save this you win but don’t go running off celebrating because we need to check on VAR because you move around a lot’.”

Redmayne had trials at Arsenal as a teenager but has played his entire career in the A-League, winning the league title for Sydney FC with two saves in the shootout that decided the 2019 championship final.

He said the plan to bring him on for Mat Ryan if the playoff went to penalties had been hatched at least a month ago but had been kept secret from the rest of the squad. Ryan had been nothing but supportive, Redmayne said.

“I’m under no illusions about where I stand in the Australian goalkeeping ranks and I’m grateful with how Matty played it,” he said.