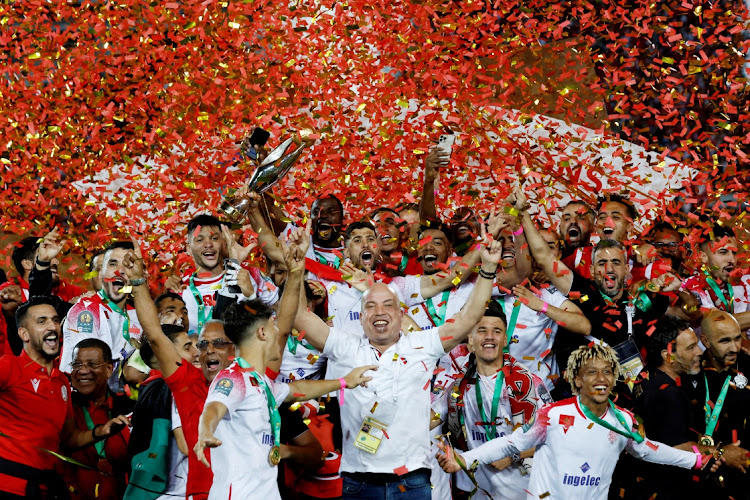 Ahly had taken the Confederation of African Football’s choice of Stade Mohamed V in Casablanca to the Court of Arbitration for Sport but lost the case. Perhaps they lost the match there too.

The noise levels of the Wydad support were a big factor for the Moroccan club‚ whose goals came from a brace by Zouheir El-Moutaraji in the 15th and 48th minutes. The superb organisational qualities of Wydad coach Walid Regragui’s defensive structure‚ and deadliness preying on the chances they created even with far less possession‚ were the others.

Egyptian giants Ahly and their coach Pitso Mosimane were left disappointed in their quest for a record-breaking third successive Champions League title.

There was to be no title No 11 for Ahly. Wydad lifted their third Champions League trophy‚ adding to successes in 1992 and 2017.

The dream final got off to a dream start. In such an intense atmosphere as provided by the spectacular level of noise of the Wydad support‚ the match could not be played at anything but a searing intensity.

Wydad were spurred‚ and Ahly a touch rattled‚ by the cauldron as early on the Moroccan outfit made the running‚ midfielder Yahya Jabrane making an intercept and feeding by Congolese centre-forward Guy Mbenza to turn and crash a drive onto the crossbar.

Wydad got the early goal they would have craved when a stray pass from Ahly centreback Yasser Ibrahim went as far as Aymane Hassouni‚ who found wing El-Moutaraji to turn‚ advance and strike a powerful‚ swerving drive into the top-left corner.

Ahly settled and pushed for an equaliser‚ their best chance coming as Ali Maaloul’s corner found the free header of Ibrahim‚ which went inches wide of the upright.

Wydad’s defence was stretched by Ahly’s movement but held to preserve the Moroccan club’s lead to the break.

The home club got the second goal they needed when they needed it — moments back from the break.

Ahly came out pushing but on the counterattack Hassouni picked out the run up the left flank of Jalal Daoudi‚ whose chip found El-Moutaraji. The forward’s first touch was stopped by Ahly goalkeeper Mohamed El Shenawy and El-Moutaraji buried the rebound.

Again Wydad consolidated and again Ahly had possession and chances to get back into the game.

In the final 15 minutes influential substitute Ayman Ashraf’s strike was well stopped by keeper Ahmed Tagnaouti before a free-kick fell to Mohamed Sherif forced a point-blank save. Percy Tau was through to a stray pass‚ one-on-one with Tagnaouti‚ but the South African could not beat the keeper.