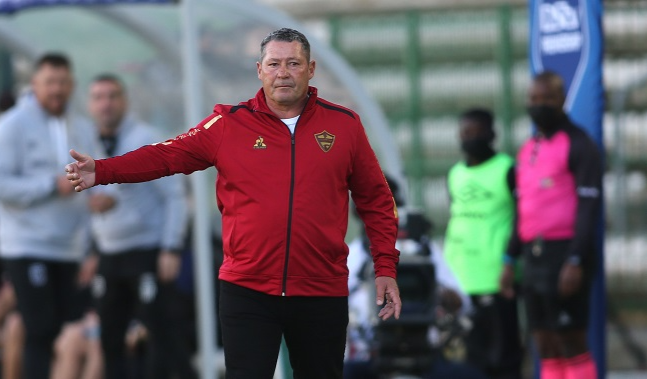 Stellenbosch FC coach Steve Barker was rightly beaming after his team’s 3-0 mauling of champions Mamelodi Sundowns at the Tuks Stadium on Saturday.

Coming just a few hours after the club’s youthful reserve team clinched the DStv Diski Challenge, it was indeed a special day for a club that had only been in existence since 2016 when they bought the franchise of National First Division (NFD) side Vasco da Gama, who campaigned in the Premier Soccer League (PSL) in the 2010/2011 season.

It was Stellenbosch’s first victory in seven attempts over a Mamelodi Sundowns side that had clinched a record-extending fifth successive PSL title. It was also Masandawana’s first home defeat in the league since they lost 2-1 to Kaizer Chiefs in April 2021.

Since then they have chalked up 14 wins and four draws before being humbled by Stellies, who also held the 12-time PSL champions to a 1-1 draw in the Winelands in their first-round encounter in early December.

Saturday’s win was made even sweeter and more significant by the fact that all three goals were scored by home-grown players.

A brace by the exciting Ashley du Preez, 24, and a strike by Jayden Adams, who celebrated his 21st birthday two weeks ago, vindicates the club’s commitment to developing talent from a local community.

It was just two years ago that Adams became the first player from the academy to sign a professional contract with the club that has a publicly stated vision to build a sustainable football pathway and brand for the Cape Winelands region and to be a catalyst for social upliftment.

The picturesque town of Stellenbosch has always had a world-famous reputation for its rugby prowess courtesy of its renowned university rugby team, Maties, that was founded in 1875. During its 147-year existence, the club has produced a record 175 Springboks and 16 national captains.

The town has also produced several top-class footballers including Reggie Jantjies, Peter “Lucky” Fisher, Deon Muller and Phillip Luiters, all of whom starred for Cape Town Spurs during the club’s heyday while sweeping the boards in the old Federation Professional League (FPL) in the 1970s and 80s.

Idas Valley FC, a club established in 1932, has a rich history too, having won the old WP Football Board’s coveted Maggott Trophy, a competition for champion clubs of the board’s constituent unions, in the early 1970s.

Stellenbosch FC’s connection with the local community gives the club a solid grounding and it was in fact at Idas Valley Sports Ground that they won promotion to the PSL in May 2019 after a goalless draw against Maccabi FC.

The success of home-grown players and their ascent to the country’s top football league is of massive aspirational value to youngsters growing up not only in areas like Idas Valley and Cloetesville, but also in the sprawling township of Khayamandi that has already produced its first PSL player in Leletu Skelem,  who moved from Stellies to Maritzburg United last season.

It’s a credit to the club that they stuck with Barker after the team narrowly escaped the promotion/relegation playoffs last season, finishing just two points above Chippa United, who managed to retain their top-flight status.

The 54-year-old coach, a former Bidvest Wits midfielder in the 1980s, started the new season as the PSL’s longest-serving coach who was still with his current employer, after joining the club in December 2016 when they were still campaigning in the NFD.

Barker, who guided Stellies to promotion in 2018, also did the trick with Pretoria University FC in 2012.

Having overseen the development of Bafana Bafana players such as Andile Jali, Bongani Zungu and Buhle Mkhwanazi during his six-year spell with AmaTuks, Barker is well versed in nurturing young, home-grown talent, a clearly stated aim at Stellies.

Owned by business mogul Johann Rupert’s Remgro and the highly acclaimed Stellenbosch Academy of Sport (SAS), a Remgro subsidiary, Stellies certainly have the infrastructure to grow into a solid PSL club.

With the club having at its disposal SAS’s top-class developmental support ranging from nutrition to physical conditioning and training facilities, they have the structures required to run a successful modern football club.

Having secured a top-eight finish this season, the future looks bright not only for Stellenbosch FC but also for the aspirant young footballers in the Winelands who now have a club that could provide them with a pathway to the top.