Man City close in on title but wary of West Ham 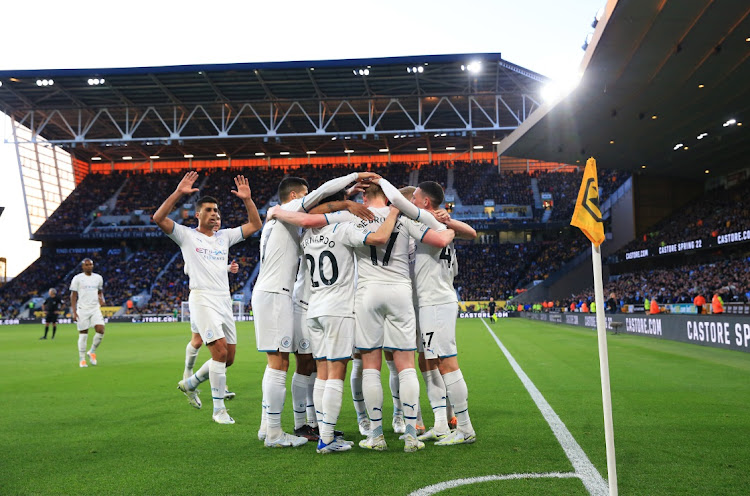 Kevin De Bruyne of Manchester City celebrates with team mates after scoring their side's third goal and their hat-trick during the Premier League match between Wolverhampton Wanderers and Manchester City at Molineux on May 11 2022 in Wolverhampton, England. Picture: GETTY IMAGES/CATHERINE IVILL

London — Manchester City travel to West Ham United on Sunday for a game that could see Pep Guardiola’s men put one hand, and perhaps a few fingers as well, on a fourth Premier League title in five years.

With rivals Liverpool playing Chelsea in the FA Cup final at Wembley on Saturday, the leaders could surge six points clear at the top with one game remaining and a superior goal difference.

Liverpool are back in league action at 15th placed Southampton on Tuesday in what is already a must-win clash if next Sunday’s final round is to offer any hope of a last-gasp shock.

City midfielder Kevin de Bruyne, who banged four past Wolverhampton Wanderers in a 5-1 win on Wednesday night, has called for caution even if his side need only four points from their last two games.

“West Ham have had a great season and played really well,” said the Belgian. “It is their last home game of the season so we know it will be a tough one. We don’t have a lot of players, it is about commitment, but it is going to be hard.”

The Hammers are, with Leicester City, one of only two teams to have beaten Liverpool in the league this season — winning 3-2 last November at the London Stadium — and also still have something to play for.

Manchester United, who have played one game more, are three points ahead in sixth place and occupying the last slot for the Europa League group stage.

West Ham knocked City out of the League Cup in the fourth round earlier this season after a penalty shoot-out, but have not beaten them in the league since 2015.

The match is also a home farewell, in a competitive match, for captain Mark Noble after 22 years at the East London club.

City have injury concerns over Aymeric Laporte and Fernandinho after Wednesday's game.

The focus will also be on the final relegation slot, with Leeds United in danger of joining Watford and Norwich in the Championship next season after a 3-0 home mauling by Chelsea on Wednesday.

Leeds are at home to ninth-placed Brighton while Burnley, ahead only on goal difference but with a game in hand, are at Tottenham Hotspur who are chasing a Champions League slot.

Everton, two points clear of Leeds and Burnley and edging away from what would be their first relegation since 1951, are at home to Brentford.