Frank Lampard’s side edge up two spots on the log to 16th place, one point above the drop zone 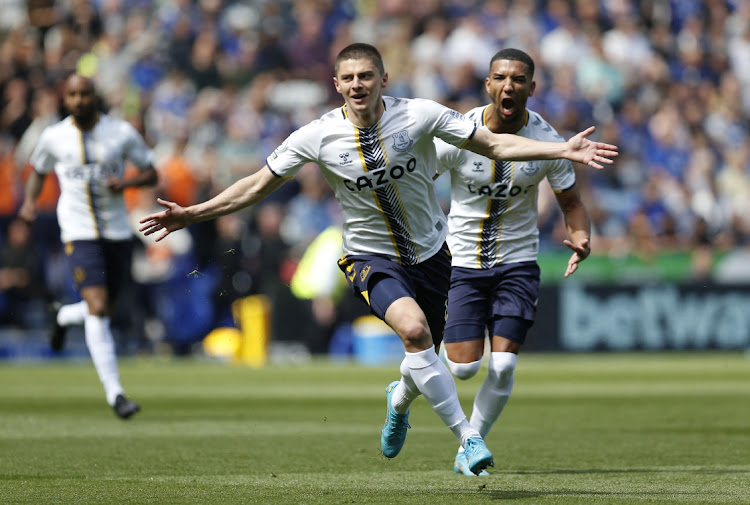 London — Everton climbed out of the Premier League relegation zone with a 2-1 win at Leicester City after defenders Vitaliy Mykolenko and Mason Holgate scored at the King Power Stadium on Sunday.

Frank Lampard’s side moved up two spots to 16th on 35 points, one point above the drop zone.

Holgate nodded in a rebound to put Everton back in front at the half-hour mark after Leicester striker Patson Daka cancelled out Mykolenko’s early opener.

Holgate scored from close range after Richarlison’s header was beaten away by Leicester goalkeeper Kasper Schmeichel after a corner.

West Ham United thrashed relegated Norwich City 4-0 to keep the pressure on Manchester United in the battle for sixth place and a swift return to the Europa League.

Said Benrahma put the Hammers ahead in the 12th minute at Carrow Road with a deflected volley hit right-footed and low off a Jarrod Bowen pass, and bagged his second in first-half stoppage time.

Michail Antonio, who scored all the goals in a 4-0 rout last time the Hammers visited Norwich at the end of the 2020 season, had made it 2-0 on the half-hour with his first league goal since January 1.

The first three goals were all assisted by Bowen.

The Canaries thought they had pulled one back in the 47th minute when former West Ham defender Sam Byram netted, but a VAR review ruled it out for handball.

Manuel Lanzini made it 4-0 from the penalty spot in the 65th minute after another VAR review found Danish midfielder Jacob Sorensen had handled.

Victory left the Londoners on 55 points and three behind Manchester United, who lost 4-0 at Brighton on Saturday and have played one game more.

David Moyes’ side lost their Europa League semifinal to Bundesliga side Eintracht Frankfurt 3-1 on aggregate on Thursday but found the perfect remedy for that disappointment in bottom-ranked opponents who were booed off at half-time.

Leeds United suffered a huge setback in their battle for Premier League survival after a 2-1 defeat at Arsenal saw them drop into the relegation zone as the hosts took another step towards securing a top-four finish.

Former Leeds loanee Eddie Nketiah fired Arsenal ahead after five minutes when visiting goalkeeper Illan Meslier dwelt on a routine back pass, allowing the forward to nip in and poke the ball home from inside the six-yard box.

Five minutes later, winger Gabriel Martinelli wriggled past three Leeds defenders and played a neat cut-back to the unmarked Nketiah for the 22-year-old to tap in and put Mikel Arteta’s side firmly in control.

Arsenal were hunting for a third, with Meslier saving efforts from Martinelli and Martin Odegaard, before Leeds were reduced to 10 men midway through the first half when Luke Ayling was sent off for a reckless two-footed challenge on Martinelli.

Leeds defender Diego Llorente headed in a corner after 66 minutes to give Jesse Marsch’s side an unlikely lifeline as they looked to salvage a point, but Arsenal weathered a nervy finish to close out the victory.