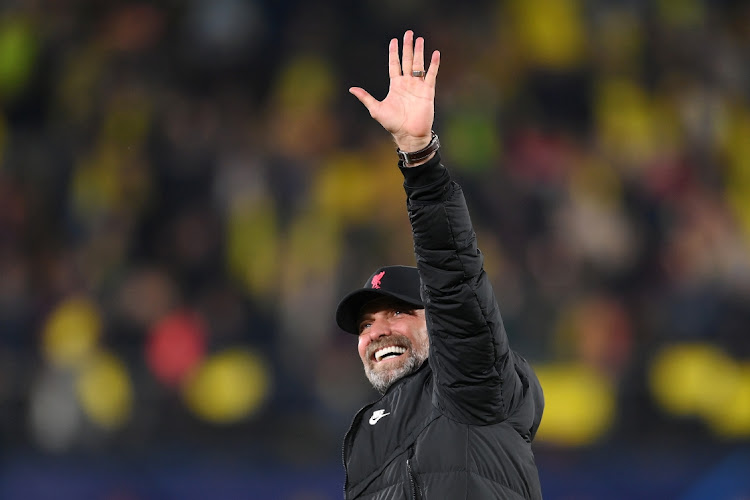 Juergen Klopp, Manager of Liverpool applauds the fans after their sides victory during the UEFA Champions League Semi Final Leg Two match between Villarreal and Liverpool at Estadio de la Ceramica on May 3 2022 in Villarreal, Spain. Picture: GETTY IMAGES/DAVID RAMOS

Juergen Klopp said reaching his fourth Champions League final as a coach felt almost like a new experience as his Liverpool side came back from two goals down against Villarreal to secure a 5-2 aggregate win in their semifinal on Tuesday.

Liverpool, leading 2-0 from the first leg in England last week, were rocked by two first-half goals from the Spanish side. However, three second-half strikes secured their third Champions League final in five seasons under the German.

“It feels like the first in 20 [years],” said Klopp, who led Borussia Dortmund to the final of the competition in 2013. “It’s outstanding, because we obviously made it a little tricky for ourselves, but we knew these kind of things could happen.”

Liverpool head to the final in Paris to face either Real Madrid or Manchester City, who play their second leg in Madrid on Wednesday with City holding a slender 4-3 lead on aggregate.

Klopp’s side were shocked by Villarreal’s aggressive man-marking in the first half that took them out of their own pressing game, and the coach conceded that he struggled to find highlights from the opening 45 minutes to show his players.

“We knew what was wrong because it was obvious, but we didn’t have a situation to show them where we got it right,” Klopp explained.

The introduction of Colombian winger Luis Diaz at the break seemed to liven up Liverpool’s attack as Fabinho, Diaz and Sadio Mane scored the goals that got them into the final.

“Obviously Luis, what a player he is, but it’s not about who came on, it was about how we started to play,” Klopp said.

The 54-year-old coach said he had no preference for who his team would face in the final on May 28, saying “whoever it will be, it will be massive”.

For opposite number Unai Emery it was the end of an epic Champions League campaign for Villarreal, who knocked out Juventus and Bayern Munich en route to the semifinals.

“Tonight we showed everybody we are a good team as well, we can have chances … but the difference in two matches, in the first leg and the second leg was their excellence,” the Spaniard told BT Sport.

Manchester City have the best defensive record in the league this season, just as they did last term
Sport
3 weeks ago