The PSL title race is all over bar the shouting 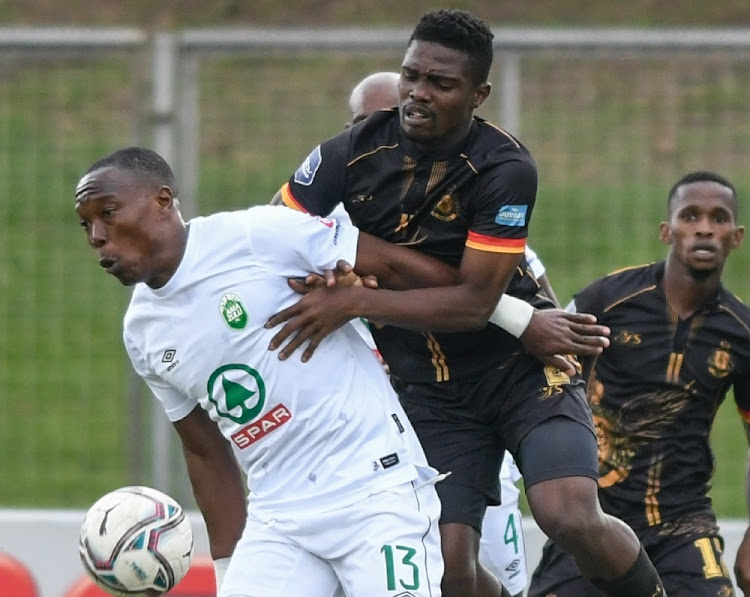 Mamelodi Sundowns need a point to clinch the Premier Soccer League title after Royal AM drew 0-0 with AmaZulu at Chatsworth Stadium on Sunday, though any knock-off calculator bought at a China Mall will tell you the race is all over bar the shouting.

Royal maintained their impressive credentials for second place, particularly with Kaizer Chiefs and Orlando Pirates’ challenges foundering, as the Durban side went to 45 points with four games to play.

From the perspective of Sundowns — who would have been crowned champions in low-key circumstances had Royal lost — the title race is as good as over.

Royal AM would have to win all their remaining games to earn the maximum 12 points, and Sundowns lose their last five, and miraculously drop goal difference advantage of +22 — Sundowns have +36 and Royal +14 — for the Brazilians to not win the title.

At least Sunday’s KwaZulu-Natal stalemate left it to Sundowns — contending with the disappointment of their Caf Champions League quarterfinal defeat to Petro Atletico at the weekend — to clinch the title themselves with a win or draw hosting Cape Town City at Loftus Versfeld on Wednesday night.

John Maduka’s dangerous Royal deserved more from the derby, where they had two convincing penalty appeals turned down by referee Tshidiso Maruping.

AM edged a tight opening half, with their best chance coming inside the opening 20 minutes. Big striker Mxolisi Macuphu controlled a chip on the edge of the box, and even though he was falling backwards managed to tee up the run of Ndumiso Mabena on the right. The clever forward’s low shot was cleared past his own goalposts by back-pedalling Usuthu defender Abbubaker Mobara.

Maduka’s halftime tweaks were strikingly effective, as Royal came out with the tools to scythe through Usuthu’s defence.

Early in the second half AM had a penalty appeal turned down when AmaZulu defender Philani Zulu headed off the run of Mokete Mogaila into the box, connecting the Royal wingback’s face with an elbow and not the ball, but Maruphing waved play on.

Moments later Macuphu stabbed a pass for Mogaila, who steered wide. The league’s second-top scorer, Victor Letsoalo, chipped goalkeeper Veli Mothwa from the right of the area, the attempted finish floating across the face of the goal.

Again Royal were denied a penalty in the 73rd, when Mobara, blocking Macuphu’s strike, hand-balled. Stranded on the ground the defender illegally held the ball in his legs, conceding an indirect free-kick from just outside the six-yard box. Substitute Mfundo Thikazi blasted into the wall.

At the other end Royal keeper Hugo Nyame saved at the feet of Luvuyo Memela from an Usuthu break.